This is as close as you will get to freestyle filmmaking. Signed by the legendary 90-year-old French director Agnes Varda and the elusive French graffiti artist JR (whose real identity and age remain unknown), Faces Places feels like a breeze of fresh air. It’s fun, it’s gentle and it’s also rejuvenating to watch.

The highly avuncular nonagenarian and the young man with hat and sunglasses attached (he never takes them off; they are an integral part of his mysterious persona) form a very peculiar and adorable couple. They seem to get on extremely well. And so they embark on a journey across the French countryside in a van packed with large flyposts and paint. 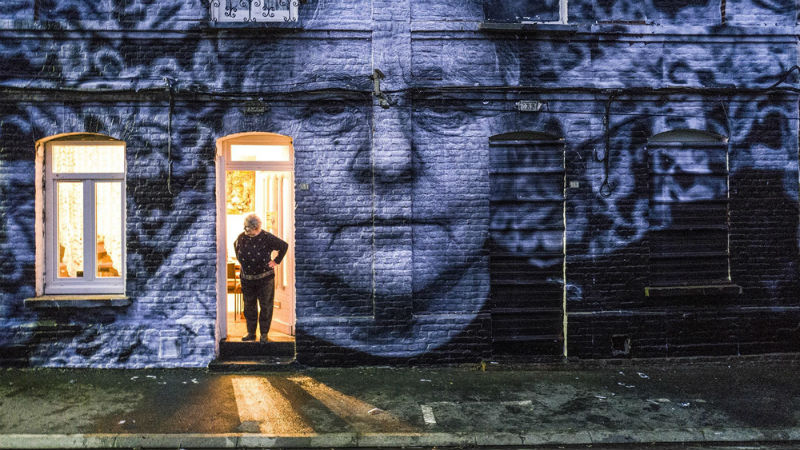 They engage with the local people and then turn the most unlikely locations (cracked walls, derelict buildings, a factory, ship containers and even a huge ruin on the beach) into an explosion of images and colours by applying the flyposts containing photographs of the locals (which they just snapped with their camera). In fact, JR does not like being called a graffiti artist. Instead, he describes himself as a photographer, and the outdoors as “the largest art gallery in the world”.

Agnes Varda and JR twist perspective to an extreme. This is pure metalanguage. A multitude of media are used: the movie cameras, mobile phones, walls, tablets and – most importantly – the random surfaces picked by the unlikely duo. This is an image within an image within a film. They recreate the locations that they visit in ways that the locals would never expect. A shy woman sees herself printed on a gigantic wall in a small countryside town, and soon becomes the biggest local attraction – forcing her to face her very own inhibitions. Dockworkers see their wives printed on a giant pile of coloured containers at the shipyard.

These people see a much larger version of themselves or someone they know in a plush and vibrant monochromatic version. The angle is often distorted and the images are permeated with plants, with gaps, with punctures or anything else that happens to be on the chosen surface. The subjects must feel incredibly honoured to be part of this doc. 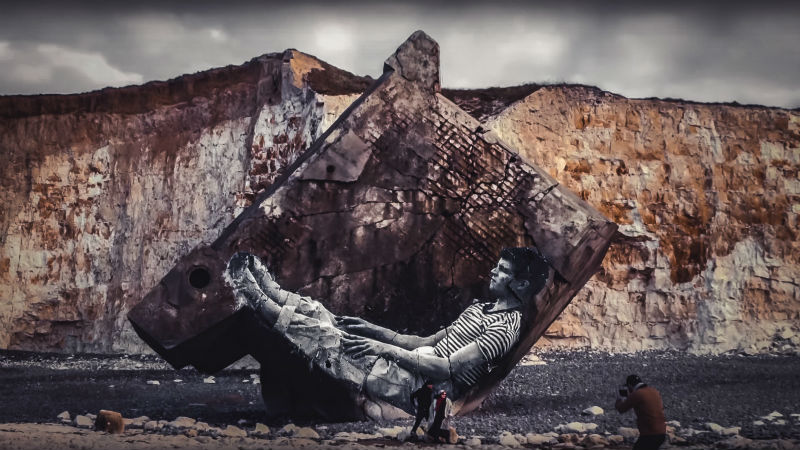 Face Places is also tribute to spontaneity and ephemerality. This is a film-as-you-go documentary. The images won’t stay there forever, and erosion, the rain or even the sea (in the case of the beach) will soon wash them away. Maybe overnight. Maybe in a few days. Maybe in a few months. One thing is certain: nothing lasts forever, and that’s ok.

The film is punctuated with anecdotes not necessarily related to the images, and the two artists also visit places that they do not intend to paint. For example, they attend to the graves of photographers Guy Bourdin and Henri Cartier-Bresson. A twisted photography of a late photographer might be a step in the wrong direction, they probably thought. Maybe a photographic sacrilege.

The film has a very moving ending, that brings Agnes Varda to tears. She attempts to visit her old friend Jean-Luc Goddard in order to reminisce about the past and – presumably – to paint his image on a wall somewhere inside or near his Summer house. But Goddard has a dirty trick in store for Agnes Varda. After all, he’s just a “dirty rat”, she laments.

Faces Places is out in cinemas across the UK on Friday, September 21st.

Boom for Real: The Late Teenage Years of Jean-Michel Basquiat

Dirty words, scrawls and scribbles! Documentary about one of the most subversive artists of the 20th century, who treated the entire world much like his own private scrapbook, investigates a very specific segment of his life - on VoD on Monday, November 26th [Read More...]

The enfant terrible of French cinema stuns audiences (or not) with a filthy masterpiece you will probably never watch - now available on Mubi [Read More...]

The anti-capitalistic graffiti artist whose real identity remains as elusive as the giant squid is the subject of documentary available on iTunes [Read More...]