"Greasy movie"
The rhythms of the waters of life. A lesbian couple living on a London barge decide to have a baby with the help of a visiting, Spanish, male friend – now available on VoD

Eva (Oona Chaplin, from Game Of Thrones) lives with her partner Kat (Natalie Tena, also from Game Of Thrones) on the latter’s barge which is mostly moored near the Anchor And Hope canalside pub in London’s Clapton. Against Eva’s better judgement, Kat invites her friend and inveterate ladies’ man Roger (David Verdaguer) to stay while he’s visiting London from Barcelona. In the course of a drunken evening, tensions surface between the two women as Eva reveals her desire to have a baby and Roger offers to father one for her. The morning after, Kat is horrified by the idea since she very much likes the relationship the way it is and isn’t ready for kids. 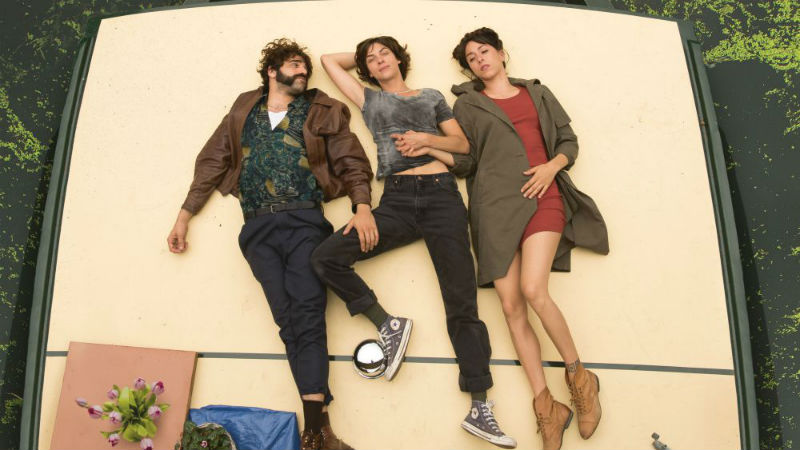 This British-Spanish production cleverly employs its two national cultures so as to satisfy audiences from both. Tena and Verdaguer play some scenes in English and some, particularly when alone together on the screen, in Spanish. To some extent, this riffs off director Marques-Marcet’s earlier Spanish language outing 10,000 Km (2014), in which the same two actors play a heterosexual couple attempting to keep their relationship going when she moves to Los Angeles while he stays in Barcelona. In Anchor And Hope, the chemistry between Tena and Verdaguer effectively plays off against that of Tena’s onscreen lesbian relationship with Chaplin.

It’s exemplary as an exercise in casting actors who fit parts well – and to some extent building roles around particular actors. In case any further proof were needed that Marques-Marcet is really good at this, he throws in Oona Chaplin’s real life mum and screen legend Geraldine Chaplin as her onscreen mother. While Geraldine Chaplin’s few scenes are a real pleasure, she never upstages the younger generation cast members who get considerably more time onscreen overall. It’s all beautifully balanced in terms of casting; Tena, Verdaguer and Oona Chaplin prove highly watchable. 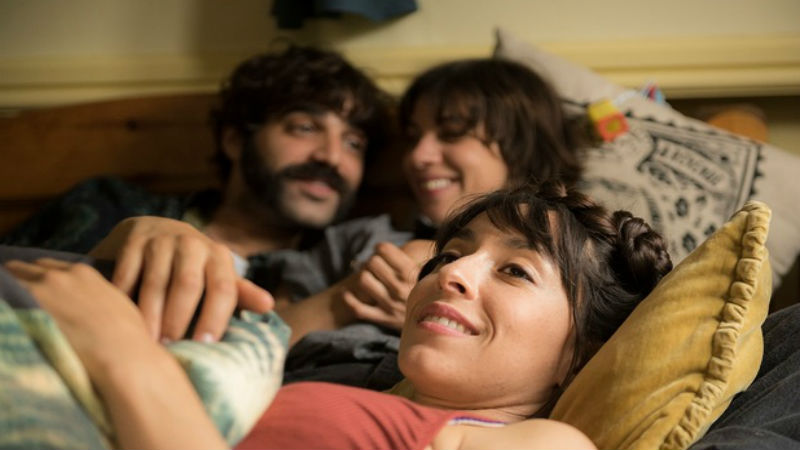 Moreover, the director has a clear knack for exploiting the wider assets with which he has to work. The film wasn’t originally conceived as set on a barge, but when Marques-Marcet discovered that Tena owned one he reworked everything around it. This lends the proceedings a unique feel for a London movie, the drama punctuated by scenes of Tena’s boat travelling up and down the canals, the cast opening and going through lock gates and so on, putting a rarely seen aspect of London on the screen – with waterway locations to die for, making you wonder why no-one’s ever done it before.

As a drama clocking in at nearly two hours, Anchor And Hope deftly juggles its deceptively simple constituent elements. Who can forget the hilarious scene where the eager to help Roger struggles to balance a porno-streaming mobile on the bathroom taps in order to fill a receptacle with donor sperm? And when Kat and Eva eventually, inevitably split, the audience wants nothing more than to see the two of them get back together again even as it wonders whether there’s any real possibility of them doing so. In short, this is a beautifully understated, real gem of a relationship movie. With its cool London canal landscapes, it’s also the perfect cinematic trip following this year’s baking hot English summer.

Anchor And Hope is out in the UK on Friday, September 28th. Out on VoD on Monday, November 12th.

Shy and reserved middle-aged Lesbian has to face a classist society after her partner is imprisoned and financial difficulties arise, in Paraguayan director's impressive first feature - now on Mubi [Read More...]

Because some things just can't be changed! American indie about gay conversion therapy that stunned Sundance earlier this year is finally out in the UK - on BFI Player on Monday, June 6th; also available on other platforms [Read More...]