This looks like harmless, child-friendly fun for the whole family. Stubby was a stray mutt that witnessed horrific battles, saved lives and performed a multitude of heroic feats during WW1. Now his story has been turned into an adorable computer-animated film, voiced by Logan Lerman, Helena Bonham Carter and Gérard Depardieu. The film celebrates the incredible bond between man and his best friend, even in arduous conditions. What’s there not to love? Well, I do have a few reservations. Please allow me to unearth the dirty facets of this charming – and yet not entirely innocent – movie.

The titular mongrel was found on the grounds of Yale University in Connecticut in July 1917, where members of the 102nd Infantry were practicing for the imminent combat across the Atlantic. He almost immediately became their official mascot. Stubby (called such because of his stubby tail) served for 18 months and partook in 17 battles on the Western Front. He saved his regiment from surprise mustard gas attacks, found and comforted wounded soldiers, and even caught a German infiltrator in the trenches – all of these episodes are portrayed in the animation. 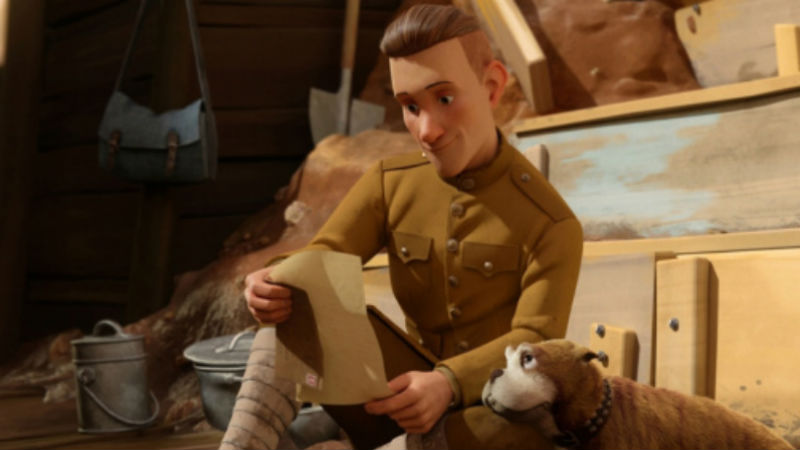 The film centres on young U.S. Army doughboy Robert Conroy (Logan Lerman), the first person to adopt Stubby. The story is narrated by his sister Margaret (Helena Bonham Carter) – a peculiar way of inserting a female voice into a movie. Eventually, French poilu Gaston Baptiste (Gérard Depardieu) joins the Americans along their epic journey through hell, as they fight against the Germans near the French/German border.

The filmmakers opted not to give Stubby a human voice in order to keep the film as realistic as possible. Stubby barks and whines. His facial expressions and sounds will make even the coldest of hearts melt. Yet he does not talk. Stubby is not anthropomorphised, at least not in the physical sense.

Yet Stubby is anthropomorphised in the military sense. He is thoroughly obedient, boundless courageous and he will fight to the end without questioning the nature of the battle. In other words, he possesses all the qualities that a good soldier should have. He’s the epitome of indomitability and servitude, the core qualities of nationalism. In fact, there is no shortage of nationalistic signifiers in the movie: an enormous American flag taking up the whole the screen, an emphatic “God bless the United States of America”, “Vive Les États Unis”, a tub-thumping soundtrack, and so on.

There was one little detail in the film, perhaps irrelevant to most people, that caught my attention. Stubby does a hand salute (or rather a “paw salute”) upon request, demonstrating unwavering loyalty and obedience. Cute? Well, I happen to find such gesture very disturbing. It reminded me of those who teach their dog how to pray before they get a treat. Dogs don’t understand military protocol and religious doctrine. It’s us humans who push our credence and rules upon them in order to make our very own bizarre rituals more palatable and humanised. 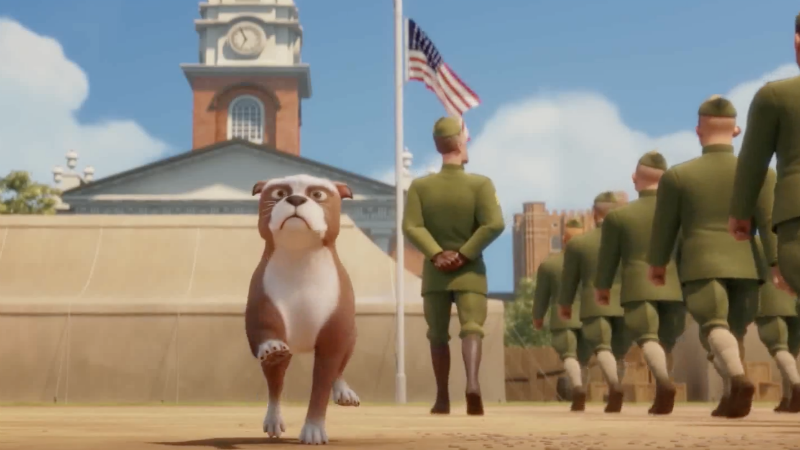 I have a dog myself, a loving chihuahua called Lulu, and I understand that a pooch can connect us to our most profound human qualities. But I find it regrettable that we should use animals in order to make a military apparatus more attractive. War is war, and it’s ugly; it should never be sanitised and romanticised, particularly through the use of animals in a film made for children. I see the war bravery embodied by Stubby as propaganda for recruiting young soldiers, in a country that should instead give up its military belligerence.

Of course this is WW1, when the US had an entirely justifiable and recommendable role in the conflict. They indeed helped to save the world. In such context, it’s easy to justify a “good vs evil” narrative, thereby celebrating Americanness. The problem is that the world has changed enormously in the past 100 years, and it’s now Americans who perpetrate the majority of illegal wars and atrocities in the world. That’s why any war apologia and signifiers of nationalism must be taken with caution, particularly if coming from the US.

Japanese sensibility, British accent. The first animated feature from Studio Ponoc, created by people previously working at Ghibli, is fine, elegant and moving. But there's also a problem with it. A very British problem! In cinemas Friday, May 4th. [Read More...]

One thought on “Sgt. Stubby: An American Hero”