"Dirty gem"
The magnificent return of the squiggly line! Dirty French animation rescues the silliness and simplicity of Looney Tunes, with an animalistic European flavour - in cinemas Friday, August 3rd

Those nostalgic of the old times when cartoons were gingerly and lovingly hand-drawn are in for a treat. The Big Bad Fox and Other Tales… will take you back to the 1930s and 1940s, the golden age of the American animated series Looney Tunes. All infused with dirtylicious French countryside flavours. Except for the anthropomorphic animals, The Big Bad Fox has very little in common with the far more sophisticated British animation Chicken Run (Nick Park/ Peter Lord, 2000) and Pixar’s Ratatouille (Brad Bird, 2007). You are literally in for a journey back in time.

The drawings are extremely simple and puerile, and that’s what makes them so charming. At times, it looks like they were made by a child, and that a thick brush was used for colouring. Well, in reality all the drawings were computer generated, in a small team of just six animators (10 at peak times). The outcome is nevertheless very convincing, and you will feel transported to the good ol’ times of Bugs Bunny, the Tasmanian Devil and Wile E Coyote (from the “Beep Beep” cartoon). In fact, the titular protagonist looks a little bit like the latter, if a little more clumsy and benevolent. 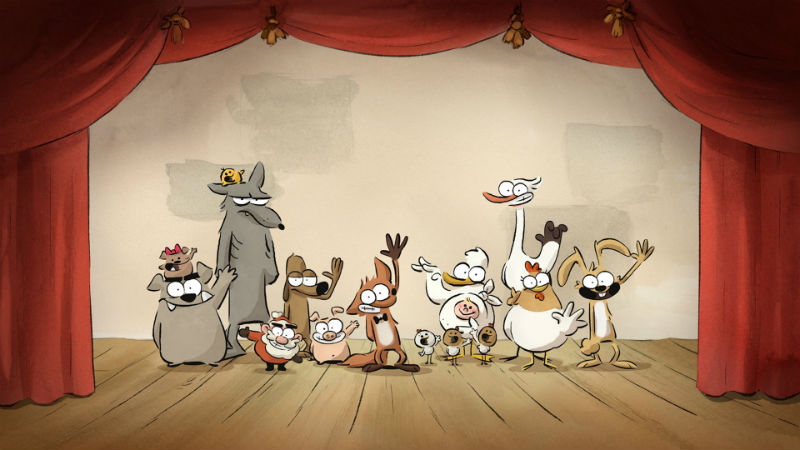 It all begins in a theatre – with red curtains et al – where a group of various animals are preparing for a show. The Fox, who happens to be the host, announces that you’re about to witness an anthology of three short stories. They all take place in an animal farm somewhere in the French countryside. By “animal farm” we mean a farm run by animals!

The first episode is entitled “A Baby to Deliver”. A lazy stork pretends to be injured in order to delegate a baby delivery in Avignon to the farm animals: the clever and grouchy Pig, the careless Rabbit and the clumsy Duck. Along their journey, they will encounter enormous obstacles, including a hungry wolf and a mysterious animal from China.

In the second episode, entitled “The Big Bad Fox”, our host stars as the protagonist. He steals three chicken eggs, but eventually becomes attached to the three chicks, who take him for their mother. Meanwhile, the same hungry wolf from the first episode wants to eat the three chicks. Their real mother (a hen) is also desperately looking for her long-lost children, in the hope to create a real family. 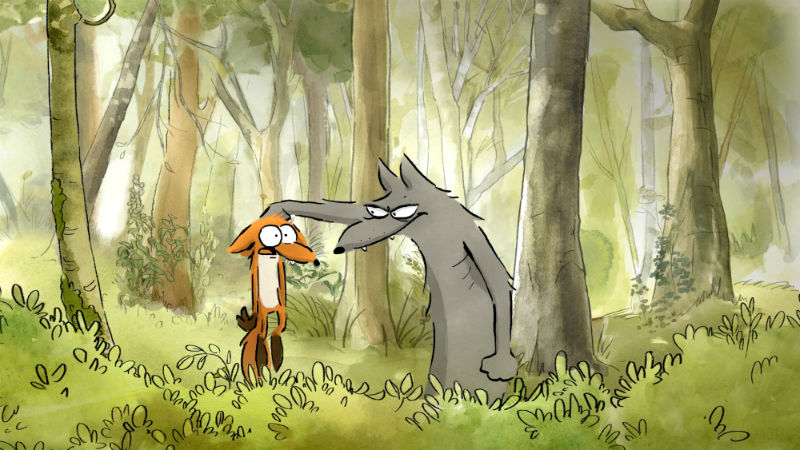 The third episode is a little out-of-season, particularly in such a sultry and oppressive Summer. “We Must Save Christmas” follows the Rabbit and the Duck, who believe that they ruined Christmas after accidentally destroying a plastic Santa. The two animals go on a quest in order to fix the perceived disaster, and ensure that all children receive their gifts. The clever Pig tries to convince them otherwise, but they all end up locked up in the company of a pack of hapless dogs. Ultimately, fate takes an unexpected turn and they meet the real Santa, and the equilibrium is restored.

The Big Bad Fox and Other Tales… is in cinemas Friday, August 3rd. Avoid the dubbed version and seek the French original instead. Otherwise the whole experience might taste a little bit like marmite on brie. Unless, of course, you have a little bad fox who cannot read subtitles!