"Filthy genius movie"
Who's the real animal? Italian film is a spectacular tale of revenge and a catharsis of bestial impulses, as a dog groomer exacts revenge on a friend with his very own hands - on Mubi on Sunday, June 12th; also available on other platforms

In most Muslim nations, calling someone a “dog” is one of the worst insults conceivable. Even in the West, calling a female a “bitch” is far from a compliment. But are our canine friends such horrible creatures? The Italian film Dogman is loosely inspired in the real story of a coked dog groomer who imprisoned a man in a dog cage and tortured him for ages in 1980s. So perhaps it’s us humans who are barking mad, and far more bestial than out furry companions.

In some unnamed and extremely impoverished coastal town in the South of Italy, Marcello (Marcello Fonte) runs a small dog grooming business aptly named Dogman. He is also a part time coke dealer. He befriends a Neanderthal thug called Antonio (Edoardo Pesce). Together they engage in a life of petty crimes and nights out. They seem to complement each other in s very strange way: Marcello is puny, ugly, calm and with a squeaky voice, while Simone is bulky, considerably better-looking, extremely irascible and with a hoarse voice. 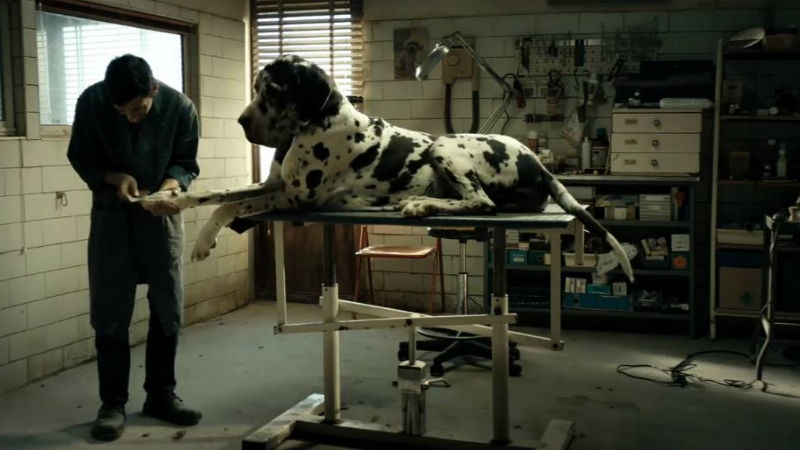 Marcello is a very morally ambiguous character, and at first it’s difficult to understand his psychologically. He has a very kind and sweet side, particularly when he’s with his daughter or with dogs. He handles his clients – a bulldog, a dalmatian, a chihuahua, a poodle and many more – with uttermost care and affection. He returns to scene of robbery upon finding out that one of his associates put a chihuahua in the freezer, in one of the film’s most moving moments (well, at least for a chihuahua owner, like me). Somehow, he manages to reconcile his pure and humane side with his dark and hedonistic adventures with Antonio. One thing is certain: Marcello’s most human side emerges when he’s in the company of animals.

It’s unclear what sustains Marcello and Simone’s friendship. It seems like the frail and diminutive Marcello is strangely fascinated and infatuated with the manly Simone (the bromance type of infatuation). Simone finds it extremely easy to manipulate Marcello with the currency he handles best: violence. Marcello is willing to take the blame for a robbery in order to spare Simone from incarceration. After a one-year stint in prison, however, something clicks inside Marcello, and his fascination morphs into anger and a very twisted type of revenge. He finds a very unorthodox way of asserting his masculinity and exhibiting it to town. 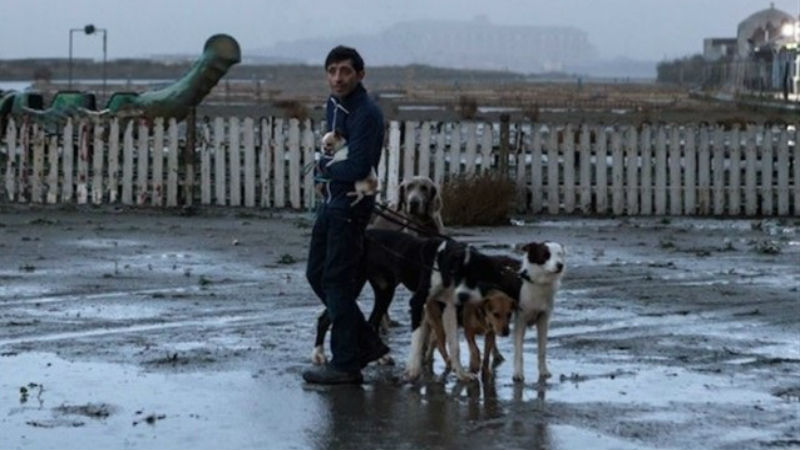 The crumbling buildings, the collapsed walls and the broken pavements partially covered in sand from the beach provide the perfect backdrop for Marcello’s broken masculinity. The photography is nothing short of spectacular. In the final 10 minutes, Marcello parades through town at dawn with his newly-found trophy. The greyish skies gradually turn baby blue sky, reflecting Marcello’s state-of-mind. He’s elated by his very own demeanour. Plus, he’s in the company of man’s best friend. These images will stay with you for a long time.

Dogman showed in the competition of the 71st Cannes Film Festival, when this piece was originally written. Marcello Fonte won the Best Actor prize. The film premieres in the UK a part of the BFI London Film Festival taking place between October 10th and 21st. It is out in cinemas on Friday, October 19th. On Mubi on Sunday, June 12th (2022). Also available on other platforms