"Dirty gem"
Despite being doused in saccharine and carefully crafted to elicit tears from audiences, Wim Wenders's latest doc carries urgent messages of tolerance and solidarity - now available on Netflix

Pope Francis remains as avuncular and charismatic as ever. He’s also the only pope in history who comes from the Americas. And from the Southern Hemisphere. And who was a Jesuit. And who decided to adopt Saint Francis of Assissi’s name, the patron of animals, merchants and ecology, credited with revolutionising the Catholic Church by placing care for the poor at its very heart. It takes a singular filmmaker such as the Wim Wenders to make a documentary about such a singular pope. But it’s also an easy and safe choice for the German director, given thePope’s popularity. It’s hardly surprising he didn’t make a film about Pope Francis’s predecessor, his fellow countryman Ratzinger (aka God’s Rottweiler).

The movie opens in Assissi, as a voice-over narrates the history of the Saint. It then blends footage from various public events, ranging from Brazil to the Philippines, with an extensive and exclusive interview with the Pope. He faces the camera and preaches with his usual flare, charisma and magnetism. It’s impossible not to be moved by Francis talking about love, tolerance and solidarity. There is also dramatic footage of carefully picked events, such as refugee boat capsizing in the Mediterranean, corpses landing on the beach and a refugee child drawing people drowning at sea. 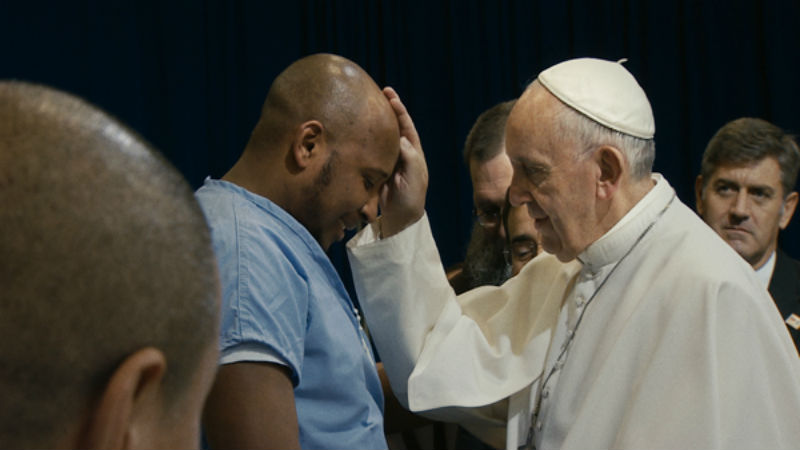 The audacity of Pope Francis’s rhetoric and attitude is what makes this documentary so riveting. He challenges the arms trade and xenophobia while addressing the American Congress, clearly bringing tears to the eyes of even the most hardened Republicans. He says that we should embrace immigrants “regardless of their big numbers”. He reminds us that we are all foreigners, in one way or another. He argues that building walls is not the way forward. He explains that the “globalisation of indifference” is a major danger to mankind’s existence. The environment is also high on his agenda, as he consistently warns the world against the dangers of a throw-away society. He’s a hard line pacifist. He emphatically shuns proselytism. He preaches about integration and tolerance of atheists. He visits the Blue Mosque in Istanbul. Audiences learn that Saint Francis of Assissi was a champion of religious tolerance, and strongly opposed the crusades. All spot-on and urgent messages for our increasingly reactionary world.

Pope Francis’s relatively demure lifestyle is also a central topic. He opts to live in a small household in the Vatican, and travels in the least extravagant cars available (an American commentator compares his vehicle to Mr Bean’s). Whether this is just propaganda or not, at least Pope Francis is getting the right message across. 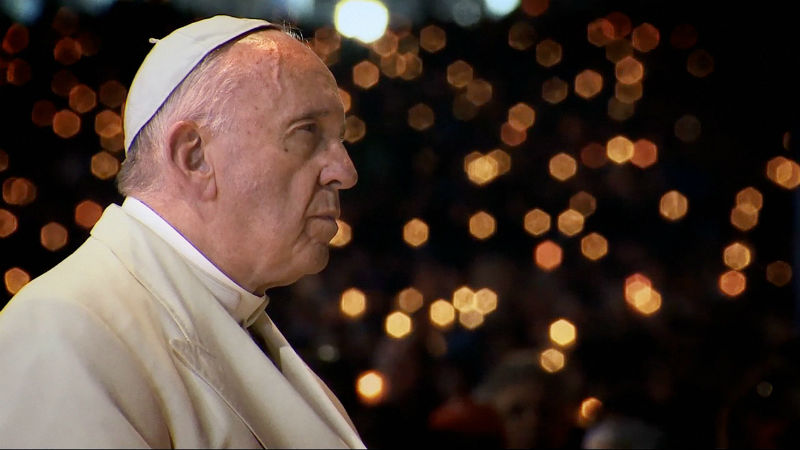 The current head of the Catholic Church is indeed a very liberal religious leader. But his progressiveness also has limits. While quickly touching on controversial topics such as the “gay lobby” and paedophile priests, Pope Francis – A Man of His Word doesn’t investigate these issues in too much detail. Critics would argue that Pope Francis has conveniently turned a blind eye on sex abuse allegations (not such “a man of his word” after all?). Transsexual and transgender people are not very happy about Pope Francis either, whom the holy man describes as victims of “manipulation”. Wim Wenders’s film conveniently avoids these incendiary issues. All in all, Pope Francis – A Man of His Word feels a little like a Vatican-sponsored piece, if a very progressive one.

The soundtrack includes spectacular songs delivered by Mercedes Sosa and Patti Smith (the subversive American rocker is an outspoken fan of the Catholic Church). The instrumental parts, on the other hand, are a little sloppy and might get a little on your nerves.

Pope Francis – A Man of His Word premiered in Cannes in May 2018, when this piece was originally written. Wim Wenders and his team received a passionate standing ovation. Many people in the audience (including myself, a militant atheist) were crying as the lights went on after the film credits. The iconic Pope and the emblematic filmmaker make an explosive tear-jerking duo. The film is out in UK cinemas on Friday, August 10th. On Netflix in January.