"Filthy genius movie"
Argentinian film produced by the Almodovar brothers about prolific and sexually "deviant" serial killer excels in originality; it's literally a film to die for - now on Amazon Prime

Carlitos (Lorenzo Ferro) has the face of Macaulay Culkin, the lips of Angelina Jolie and the hair of an angel. Yet he epitomises evil. He’s a staunch robber and serial killer. He doesn’t believe in ownership of goods, and so he will steal anything that comes his way, ranging from cars and posh mansions to a gun store. He also has a profound disregard for life, and so he will kill just about anyone who stands in his way. The action takes place in 1971.

Carlitos befriends the dark-haired and also extremely good-looking Ramon (played by Chino Darin, son of Argentinian über-actor Ricardo Darin), who soon becomes his partner in crime. Ramon’s parents also become enthusiastic accomplices. Angel’s parents Aurora (Cecilia Roth) and Hector (Luis Gnecco), on the other hand, suspect that their son is up to no good, and do not approve of his behaviour. But there’s little they can do in order to stop their deviant and untrammelled angel. He carries on with his crime spree undaunted.

All the characters in The Angel have a weird and creepy Lynchian feel. They are not like the people you meet everyday on the streets. In fact, Carlitos comes across as the most plausible and even likeable person in the film – despite his homicidal tendencies. Carlitos sees Carlitos as entirely normal. And so will you. Ortega manages to naturalise violence without celebrating it. This is a brilliantly twisted movie. Simply dirtylicious.

There are also many elements of Almodovar. First of all, The Angel is Camp as hell (forgive the pun). Secondly, the plush colours of Almodovar are everywhere. Almodovar’s favourite colour red is used sparsely yet very cleverly and significantly. Blood is red, and so are Carlitos’s socks, shirt and underwear in the most key moments. But the most Almodovarian element of The Angel is his sexuality. Carlitos is openly effeminate and sexually ambiguous. He dates a girl and yet he is not ashamed of expressing his attraction for both Ramon and his father. 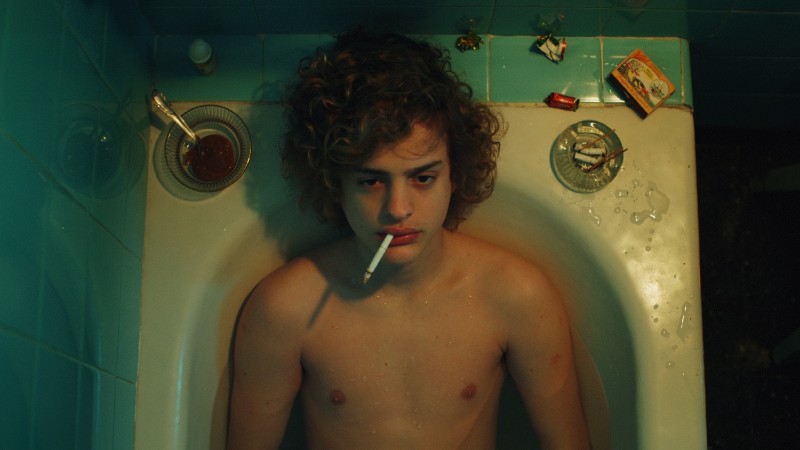 The film montage is very deft. A metal worker’s torch suddenly replaces a cigarette. A car enters a tunnel suggesting that Carlitos and Ramon had intercourse (very much like the train in Hitchcock’s North by Northwest, 1959). This orgasmic sequence acquires a further dimension when the unexpected happens just a split second later. The French word for orgasm “la petite mort” (“the little death”) is very appropriate to describe what happens. The consummation of Carlitos’s orgasm could be fatal. Sadly, I can’t explain exactly what I mean without spoiling the film. So I’ll just leave you guessing instead.

What I can reveal is that there is no shortage of penetration in the film. Bullets penetrating every part of the body. Yet no penises. There are so many murders entirely preposterous in their nature that you’ll be grateful this is just a film. A story so absurd it could never be real. Except it is. Carlitos Robledo Puch did exist. In fact, he’s still alive and in prison. He’s best known as “The Black Angel” or “The Death Angel” of Argentina, and one of the country’s most prolific and certainly the most deviant and infamous serial killer. Carlitos is the real-life Argentinean Marilyn Manson: glamorous like Marilyn Monroe (he likes wearing earrings and being compared to her) and murderous Like Charles Manson.

Despite borrowing a lot from Lynch and Almodovar, this is an surprisingly innovative film with an identity entirely of its own. The soundtrack blends Argentinian/Spanish rock, pop and chanson. And everything feels very South American.

The Angel premiered at the 71 Cannes International Film Festival (in 2018), when this piece was originally written. It was part of the Un Certain Regard section, and so it did not vie for the event’s top prize the Palme d’Or – which is regrettable. It premiered in the UK a part of the BFI London Film Festival October 10th-21st. It’s out on Amazon Prime in October 2020.