"Mostly clean movie"
Japanese sensibility, British accent. The first animated feature from Studio Ponoc, created by people previously working at Ghibli, is fine, elegant and moving. But there's also a problem with it. A very British problem! In cinemas Friday, May 4th.

Yonebayashi managed to carve out a career for himself as an animator at Studio Ghibli so successfully that he became one of the few employees not only to graduate to directing features there (Arietty/Kari-gurashi no Arietti/2010; When Marnie Was There/Omoide no Mani/2014) but also to receive consistent critical acclaim for them. So there’s great excitement that he should have quit Ghibli and formed his own animation company Studio Ponoc from which Mary And The Witch‘s Flower is the first release. Yonebayashi seems to be carving out a territory all his own. Like Ghibli’s Howl’s Moving Castle/Hauru no Ugoku Shiro/Hayao Miyazaki/2004), on which he worked as a key animator, Yonebayashi’s three films as director are all adaptions of children’s books by English women writers (Mary Norton for Arietty from her Borrowers series, Joan G.Robinson for Marnie and Mary Stewart for Mary) and he appears to warm to such material. 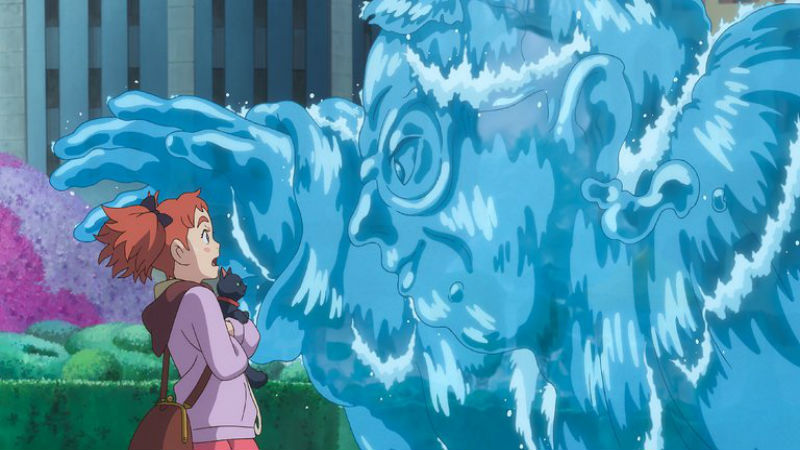 Mary And The Witch’s Flower is set in and around a village in Shropshire where Mary lives with her ageing Aunt Charlotte. Following black and grey cats named Tib and Gib through a forest, she discovers a strange flower which, it turns out, is called fly-by-night and can grant her the powers of a witch. As in Ghibli’s marvellous Kiki’s Delivery Service/Majo no Takkyubin (Hayao Miyazaki, 1989) there are no evil undertones to witchcraft here, it’s more about flying around on a broomstick and dealing with herbs, flowers and medicines. Mary’s flying takes her to Endor College run by Madame Mumblechook and home to demented scientist Doctor Dee who, when they learn Mary knows the whereabouts of the extremely rare fly-by-night, suddenly become very interested in her. Then one of the cats and its owner Peter, a boy about her own age from the village, mysteriously disappear…

Leaving aside for a paragraph the issue of the less than satisfactory English language dub, this is a splendid children’s adventure with sympathetic child characters, likeable adults and dastardly villains, like the sort of book I would read years ago as a kid. But it’s not a book, it’s a drawn animated movie and the pleasures of this medium are very different – hurtling through the skies or across the land and sea on a broomstick, seeing animals transformed into hideous mutations of their true selves thanks to a magical version of genetic modification, following a black cat who (passing a fallen tree trunk) changes from black to grey and back again – something for which there is a completely rational explanation, i.e. there are two cats, one black, one grey, although you haven’t yet been shown that fact. Other elements include a witches and wizards school which, although part of Mary Stewart’s book (The Little Broomstick) that was first published back in 1971, will resonate with today’s fans of the Harry Potter franchise. Viewers will marvel at visual detail which looks particularly impressive on a really big screen. 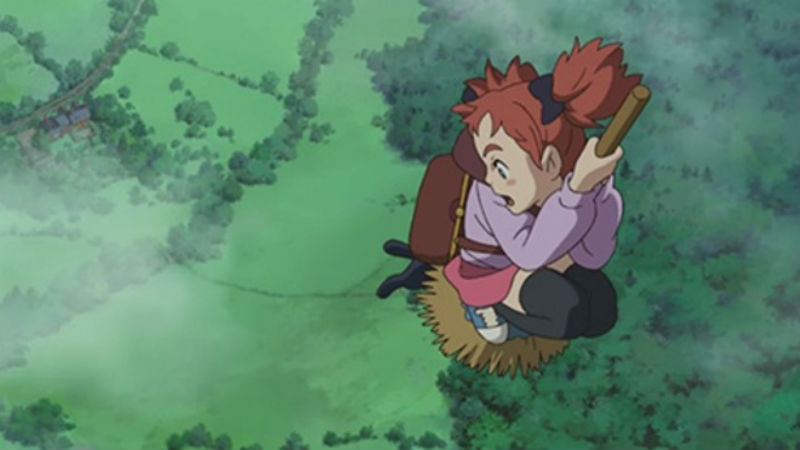 There’s a perception in the UK, right or wrong, that the market for watching films like this subtitled in their original language is very small. Mary is, after all, a children’s film and it seems not unreasonable to want it to reach the largest children’s/family audience possible. That poses a massive problem in the case of this particular film though. Even though Yonebayashi’s films are adaptations of English-based stories, these are stories seen through Japanese eyes and told in the Japanese language with its very different vocal rhythms. If you’re going to dub into English, you need to take account of that and make it work. You need a strong cast and a really good English language dubbing director who understands all that and can guide the actors through it. [It can be done, as Ghibli’s superb in-house English dub of Only Yesterday/Omohide Poro Poro (Isao Takahata, 1991) demonstrates.]

But the English dub of Mary is pretty poor and pales behind the much more captivating Japanese subtitled version (which we’d give **** rather than **1/2). That’s something of a tragedy. While the Japanese subtitled version (if you can find it playing anywhere) is a breathtaking, dirty ride, the English language dubbed version, while quite likeable and possessing the considerable virtue of Shropshire accents, has lost the dirty qualities that make the film magical. This latter version may make you wonder what all the fuss is about and consequently not bother with the inevitable Blu-ray/DVD release (which will almost certainly contain the far superior subbed version as well).

Mary And The Witch’s Flower is out in the UK on Friday, May 4th. Watch the subtitled trailer here:

And compare it with the dubbed one:

One of the most subversive and singular voices of Japanese animation and the co-founder of Ghibli has sadly passed away at the age of 82; huge fan Jeremy Clarke looks back at his fascinating life and achievement - and what made his films different from everyone else's! [Read More...]