The Strangers: Prey at Night

"Greasy movie"
Are you into dirty carnal pleasures? Sequel of 2008 slasher doesn't cut any new ground in terms genre innovation, instead indulging in a feast of penetrative violence - available on VoD on Monday, August 20th

As the door closes on an amorous couple, either clothes could frantically be ripped off for an impulsive fuck, or sensual foreplay could precede the penetrative act that leads to an orgasmic crescendo. Excusing the vulgarity, if able to compare cinema and sexual relations, of momentary pleasure versus a more emotional or meaningful, or even intellectual experience, then The Strangers (Bryan Bertino, 2008) is the latter, whilst its sequel The Strangers: Prey at Night (the film being reviewed here) is filled with an impulsive and violent lust.

On route to dropping their troubled teen daughter Kinsey (Bailee Madison) off at boarding school, a family find themselves the prey of masked killers in a secluded mobile home park. 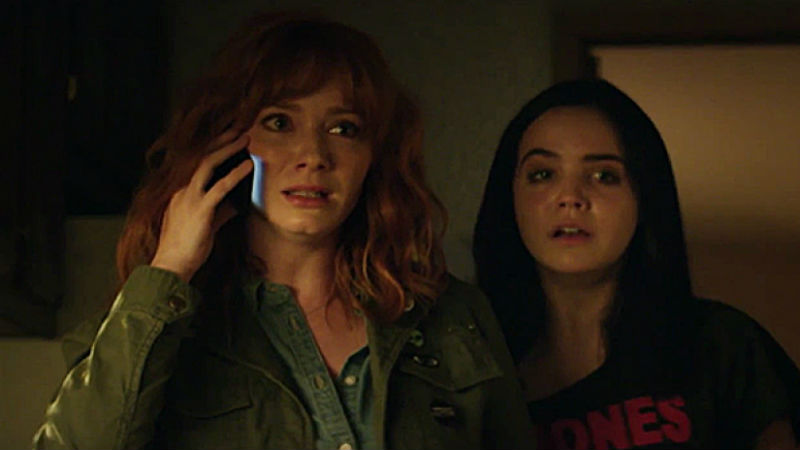 The sequel’s urgency to descend into violent bloodshed, opposite the abstention of penetrative violence of the former, creates a disconnect between the two films. From a suspenseful game of cat and mouse, the series, if there is such ambition for a trilogy or franchise, has journeyed to a focus on the physicality of violence. What we see is the carnal satisfaction of the impulses over a more emotive type of storytelling; suspense then crafted through anticipation versus suspense now of surviving the storm of violence.

Yet this should be respected as the sequel’s director Johannes Roberts, working with a script from the original film’s screenwriter-director Bryan Bertino and co-writer Ben Keatai, oversees a redirection from the home invasion to the slasher sub-genre. Remaining in and expanding upon a world that is plot- rather than narrative-centric is inevitably vulnerable to suspicion, leading to trepidation and tempered expectations. This redirection does not qualify as a whole transformation, the violent home invasion scenario and the underlying theme of pressure to an already fractured relationship is a dynamic carried on over. Yet breaking the claustrophobia of the home and sub-genre, does allow the film to find its own identity in the presence of its older sibling.

An interesting note is the way these two films feed into the theme of escalation and how Pin-up’s closing words in 2008 that “It’ll be easier next time”, are now seen in a new context. The way events transpire here speaks to the inability to contain violence, even by those orchestrating it. The problem is that this fracture lacks the same potency as the first film, which evokes the uncomfortable feeling of intrusion upon a sensitive moment for couple James (Scott Speedman) and Kristen (Liv Tyler), following her rejection of his marriage proposal.

The intrusion of the masked tormentors and their murderous intent only stoked these feelings of intrusion, tapping into that wisdom given to newlyweds for a couple to always end a day as friends. Throughout this resonates with tragedy as a couple are deprived of peacefully resolving an awkward moment that has left their relationship on a precipice. 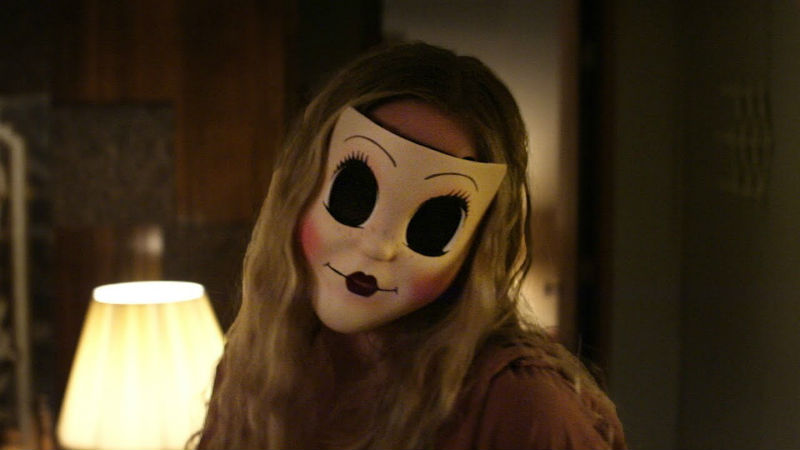 Film functions on an emotive level, evoking feelings within its audience that are both divided between a conscious and unconscious awareness. The fractured family through the teenage recklessness that reminds mother Cindy (Christina Hendricks) of her own youthful mistakes, injects an emotional dilemma of the consequence of one’s actions, with what is a rational and reasonable sense of guilt. Rather than lacking the same potency, in the former the fracture was felt emotionally, whereas here its resonance evolves from an emotional into a philosophical one. Kinsey who if the archetypal ‘final girl’, will have to confront that all too human battle of learning to forgive oneself, which is a direct challenge to the oppressive hierarchical structure of the catholic faith. Meanwhile, her ordeal if survived is one that sees a transformation of her sense of self, that represents a death of the reckless and angry teenager who was first introduced. The Strangers: Prey At Night is a film of metamorphosis on multiple levels, a progression that affords it an independent spirit.

A decade on from the release of the first film, the sequel is no example of exceptional filmmaking, nor is it original, yet neither is it foolhardy or under any illusions of grandeur. Rather its director and writers work modestly in a familiar form, and thankfully they avoid frequent jump scares and other futile attempts to terrify. Instead they choose to craft a humble and therein an enjoyable slasher, and one cannot deny the bond formed with Kinsey as we share in her traumatic ordeal. Here is a pure bout of good versus evil that we can cheer and fist-pump along to, whilst indulging in that tactical ‘what if’ we were in this situation. It is however without doubt a momentary pleasure, a quick and impulsive experience through the tonal contrasts to its forerunner. But every once in a while there is no harm in indulging in a little pleasure, and look a little closer and there is a reminder of deeper human concerns peering through the horrific ordeal.

The Strangers: Prey at Night is out in cinemas across the UK on Friday, May 4th. Available for digital streaming on Rakuten from Monday, August 20th.