"Dirty gem"
People have the power? Documentary follows activists in Cambodia for six years as they fight against forced resettlement and the country's illiberal democracy - now available on BFI Player

Film is a powerful weapon against oppressive regimes and also an instrument of international solidarity. In this case, a group of Cambodian activists use both their phones and the foreign director’s camera in order to register police brutality and the government’s anti-democratic stance between 2011 and 2016. The country’s “democracy”, which was reinstated roughly in 1979 after the demise of Pol Pot’s ultra-oppressive Khmer Rouge is very young and fragile. This is a typical example of illiberalism – alongside countries such as Brazil and Tunisia -, ie so-called democratic nations where the erosion of human rights and the state of exception are pervasive.

Most of the action takes place in and around the Boeng Kak Lake area (pictured below), in the country’s capital Phnom Penn, where the local community is fighting against forced resettlement. The government is planning to build a modern block in the area, but the compensation offered to these people is described as “ridiculous”. Their struggle against developers becomes heated and violent, and it’s only once the world bank (which is financing the project) steps in in favour of the impoverished dwellers that the government takes action. A truce is finally achieved, but the solution is as brittle as the country’s democracy. And soon the struggle resumes. 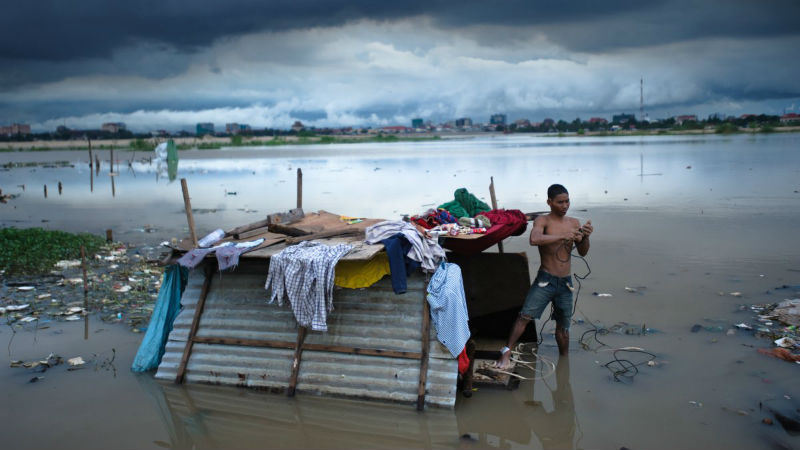 Predictably, this is not lighthearted viewing. This 130-minute doc will hit you right in the face with its candidness and straightforwardness. This is not a fly-on-the-wall type of film. You too will right inside at the heart of protests.

There are constant mentions of Pol Pot and Khmer Rouge. To these Cambodians, the current regime is equally oppressive. “The difference is that violence here is expressed through corruption”, one of them clarifies. The government’s view of democracy is a little perverse, to say the least. The governor of Phnom Pen explains: “you don’t do democracy on streets, but through dialogue”, in order to discourage and delegitimise protests. So you don’t do democracy on the streets. That’s a new one for me!

It isn’t just democracy that’s been subverted here. Religion (Buddhism, in this case) is used for very unholy purposes. The Supreme Patriarch is aligned with the corrupt government, reminding us of the dangers of a religious state. A monk called Venerable Sopach (pictured below) refuses to abide and instead sides with the people. He’s the true expression of altruism and care for the poor. Yet the “monk police” threaten to defrock him, and he’s eventually evicted from the pagoda where he dwells. His offences: “illegally attending court” and fostering demonstrations. “A Pagoda is not a place for protest”, he’s told. 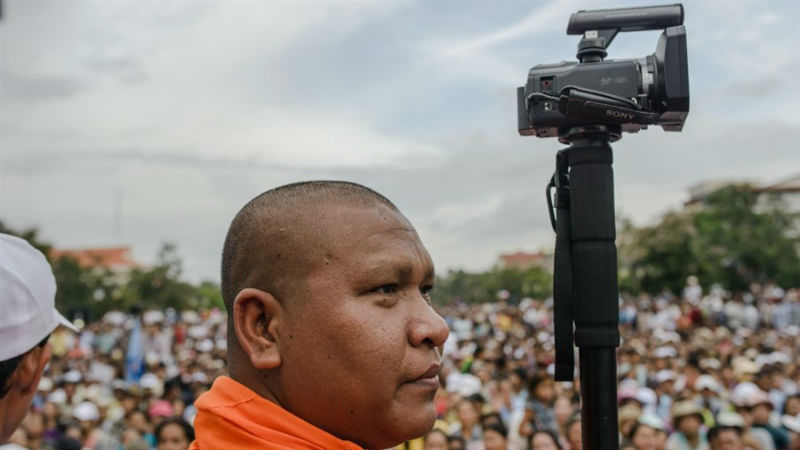 A female activist called Vanny Tep is the other protagonist. She eventually travels to the US in order to speak at the World Bank and to meet Hillary Clinton and Christine Lagarde. A major achievement, of course. Yet I’m not convinced that talking to these two lovely ladies is necessarily a victory against capitalism.

The resilience of Baung Kak protesters is remarkable, but their cause eventually gets diluted into a much bigger effort for democracy, as 100,000 garment factory workers go on strike and the country takes to the streets in order to protest against Hun Sen’s rigged elections. They are joined by the opposition leader, and together they finally reach an agreement with the government. It didn’t last long. Just last November, just after the film was completed and premiered in Europe, Cambodia’s top court dissolved the country’s opposition, in what’s clearly yet another major blow to the country’s (travesty of) democracy. Hun Sen is still the country’s Prime Minister to this date.

A Cambodian Spring was out in cinemas across the UK on Friday, May 17th. Available on BFI Player from Friday, January 25th.