"Greasy movie"
Documentary centres on a criminal court judge who organises a running club, comprised of inhabitants from L.A.’s Skid Row in the hope of discovering some sense of worth - now available on VoD

The films that tell how men with questionable pasts who turn to sport for redemption has been told from Rocky (John G Avildsen, 1976) to Moneyball (Bennett Miller, 2011), but this is a true story, one that documents the real ruined lives of those on screen and those who seek to change it. There is little of the beauteous Chariots of Fire (Hugh Hudson, 1981) glamour here. Instead, Skid Row Marathon follows five runners, running away from the streets of Los Angeles to run marathons globally. It’s arduous, but hopeful. And the participants feel the benefits, as Ben (who entered the Mission at 300 pounds, he admits) tells the camera during an opening interview segment “whatever is going through your head, go to the practice, things will happen”.

The film explores how these varying characters befriend each other, as scenes flicker from Judge Craig Mitchell congratulating Rafael on his parole (having spent nearly three decades incarcerated) and David, during an insightful talking heads moment, admits he once nearly gave up on everything before finding life through the tracks. It’s an insightful look at the human soul, soaring through times of sorrow. 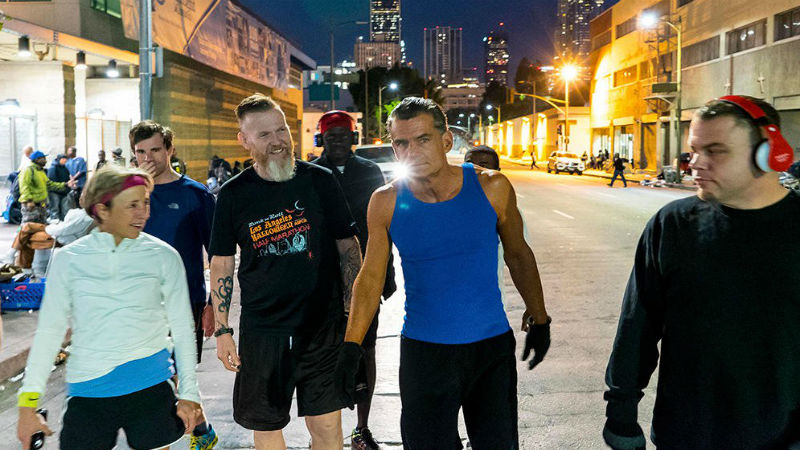 The film is strong in its content. But it lacks directorial command and flair. There is a poor use of panning and editing, as scenes cut abruptly from one to another, carelessly juxtaposing a darkened city night with the pretty painted pictures of an art studio. It’s a leap that takes viewers out of the movie, a lack of style and technique is evident. Similarly, the music cues come across too strongly as a reggae track appears too loudly over a beach scene and fades as quickly as it entered.

But documentaries aren’t solely based on vision or technique, and the interviewees have some very strong moments of potency and poignancy. Rafael dictates to a class how remorseful he is at his past crimes (which have cost him virtually a lifetime in prison) and there’s a tenderness and brutal honesty to his words. As Mitchell injures his back while running, his agony is caught on camera, and it’s a raw, intoxicating watch of agony. 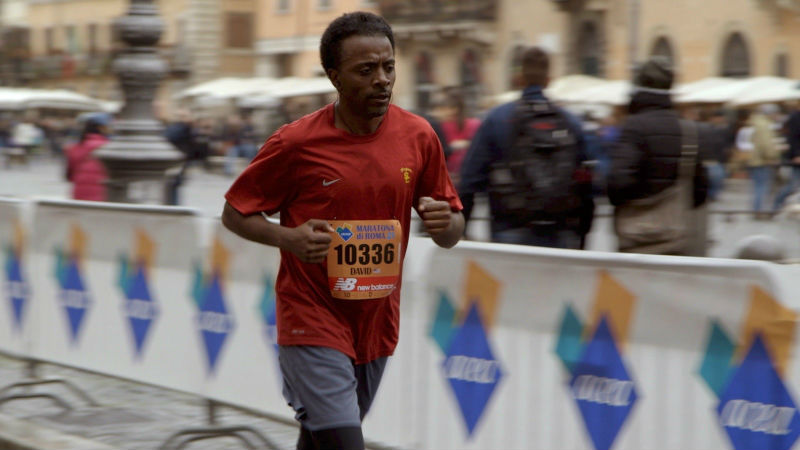 The continued motif of the members running is a fine motif, reminding how the pathway is a way of ridding demons both metaphorical and literal, and the characters are so likeable and engaging, audiences cannot but wish these people luck throughout their lives.

Skid Row Marathon was shown an exclusive, one night only, Event Cinema release on Wednesday May 9th (2018) in more than 100 selected multiplex and independent cinemas nationwide. The film was released in association with The Big Issue, Runners World, The Running Charity and Marathon Talk.

A docudrama covering the 2013 Boston Marathon bombing, the citywide manhunt that ensued and the lives of professional and ordinary citizens caught up in that day and its aftermath - now on iTunes [Read More...]

What are the inevitable consequences of bullying? French Canadian LGBT drama exposes the disturbing face of high school life if you're gay, with a very surprising twist at the end - in the MyFrenchFilmFestival (online) [Read More...]