L iving in a world filled with very little, Xolani (Nakhane Touré) works in a Queenstown (in Eastern South Africa) warehouse for a white boss. Introduced during such labour, his social life is left as an aside from the filmmakers. Yet, away from his professional commitment, every year “X” ventures outside of the city to help his former rural community with a traditional circumcision – Ulwaluko. Placed in charge of nurturing young teenagers into men, he must tend to their titular wound during a long secluded period in the barren wilderness.

Responsible for healing a young city kid, Kwanda (Niza Jay), X’s deepest secret – his homosexuality – is slowly identified by the boy. Orientating in an age-old practice, the unavoidable primary focus of The Wound’s efforts lay in the depiction of masculine pious values. Besides this, one cannot look past its acute representation of not just homosexuality, but the pitfalls of loving someone too much. 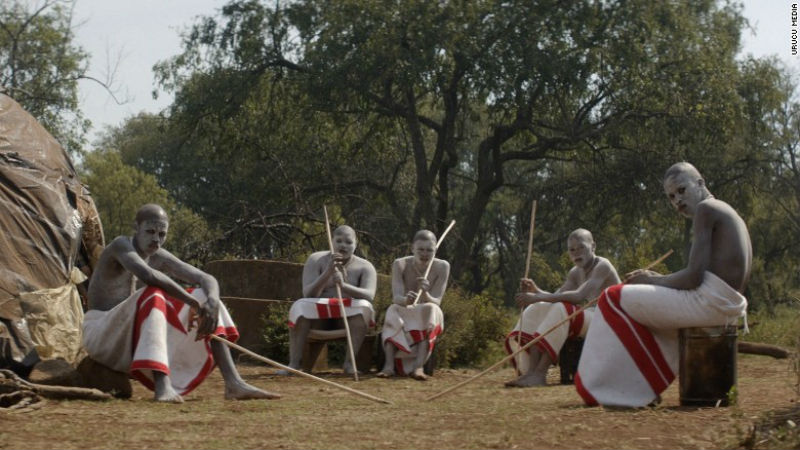 A thin veneer susceptible to crumbling under pressure, the masculinity of Xolani, eloquently portrayed by Touré, is a fragile one. Expressed in absent glances into the distance, his own Ulwaluko evidently has not created a strong macho character, as intended by this patriarchal society. When arriving at the rural camp, he is greeted by an old friend and fellow khaukatha Vija (Bongile Mantsai). Married and with three children, Vija, like Xolani, hides his true self from the world. Two alternative sides of the same coin, the rural space allow their desires for one another to come to fruition. However, in director John Tregove’s crafted realism, a distinct lack of bucolic imagery arises in this link between desire and nature. Similarly, their relationship is nothing more than a form of exercising lust for Vija, unknowingly to Xolani.

Instead of romanticising their sexual encounters, Paul Ozgur’s camera and lighting initially capture their intercourse against the backdrop of low key lighting, until an explicit scene towards the film’s end. Unobtrusively filming these sequence with a clear eye, both the cinematographer and director retain a desirable presence, whilst exhibiting the vulnerability of Touré’s character. Imbuing a central dynamic between love and hiding his true self from the world allows director John Tregove’s feature debut to express the fundamental conflicting nature that inevitable lays in all humans; regardless of class or gender. Furthered not just through one’s sex but likewise in sexuality speaks to societies’ expectations to define gender into stereotypes. 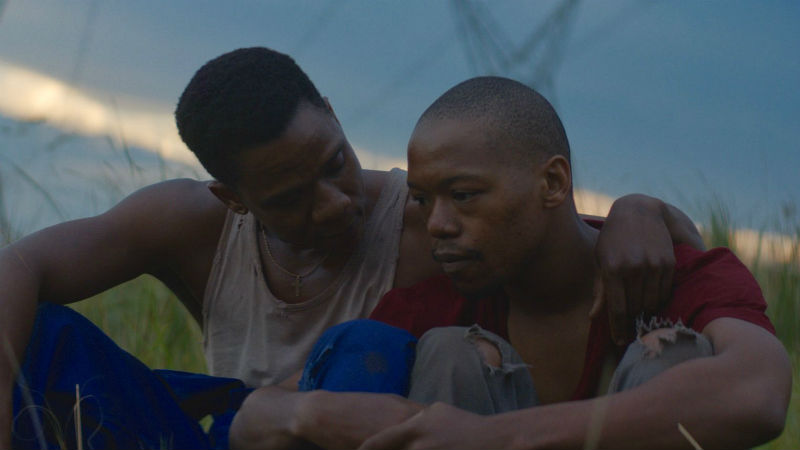 Managing Kwanda’s slow healing, the boy is ridiculed by the more rural ‘initiates’ for his adoption of wearing trainers with traditional African robes. Covered in white paint, their innocence is emblazoned upon their skin. Possessing similar imagery to Rungano Nyoni’s Bifa award-winning debut, I Am Not a Witch (2017), the entrapments of highly patriarchal societies interlinks the two, making for a perfect double feature. Absent of any sensei-apprentice qualities, the relationship held between Kwanda and Xolani is an arduous one for both parties. A stark contrast to the authoritative ways of Vija, X does not place virile pressure on the boy. Voyeuristically observing other people’s action, Kwanda comes to recognise himself in Xolani’s shy reclusive personality.

Accompanying the visuals, the diegetic sounds of Xhosa chanting fill John Tregove’s film with a spiritual ambience. Performed by the cast whilst at the moment, tribe chants as Somagwaza, Uyingew and Siph’Umentabeni create a distinct soundscape. Such traditional songs are consequentially juxtaposed against Kwanda’s one moment of engagement with the real world; listening to a techno based track in a car. A clash of cultures in the music evidently informs the filmmaker’s intentions to illustrate an abundant disparity in Xolani’s sexuality against the heteronormative milieu.

Unfolding in its final act, as the bandages of Kwanda’s wound similarly do, The Wound’s lasting impact is one of melancholy. A means of all this, the haunting use of the formerly mentioned native chant Siph’Umentabeni unnervingly lingers over the credits. Capturing the character’s in an impartial manner, John Tregove delivers an atmospheric piece, one that is sure to become a canonical film in world cinema’s archive.

The Wound is out in cinemas across the UK on Friday, April 27th, and then on VoD the following Monday, April 30th