"Greasy movie"
To infinity and beyond! Numerous heroes from the Marvel Cinematic Universe descend on one movie to confront the deadly supervillain Thanos, but is there anything dirty about Disney's latest endeavour? Out on VoD on Monday, August 20th

Movies have always been in the middle of a war between making money on the one hand and having something meaningful to say on the other. There is no doubt whatsoever that Avengers: Infinity War is at the top of its dirty game in taking money. This is the film where numerous characters from the Marvel Cinematic Universe (MCU) converge, some to die onscreen, some to fight in another movie. The Marvel movies are huge at the box office and as long as this one doesn’t screw up (which it doesn’t) it’s set to make a killing. Reviewers are already fawning and Disney’s money men will clearly be delighted.

Some basic, hopefully spoiler-free plot. Thanos (Josh Brolin) is a massive-bodied, intergalactic villain bent on randomly wiping out every other inhabitant of any world he can get his hands on starting, at the beginning of the film, with Asgard, home of Thor (Chris Hemsworth) and Loki (Tom Hiddleston). His purpose will be much easier to accomplish if he can obtain six ‘infinity stones’ – Loki has one, Dr.Strange (Benedict Cumberbatch) has another – as these will enable him to simply snap his fingers and obliterate half-populations. It’s up to the Avengers and a roughly thirty strong host of Marvel superheroes, including the Guardians Of The Galaxy, to stop him. 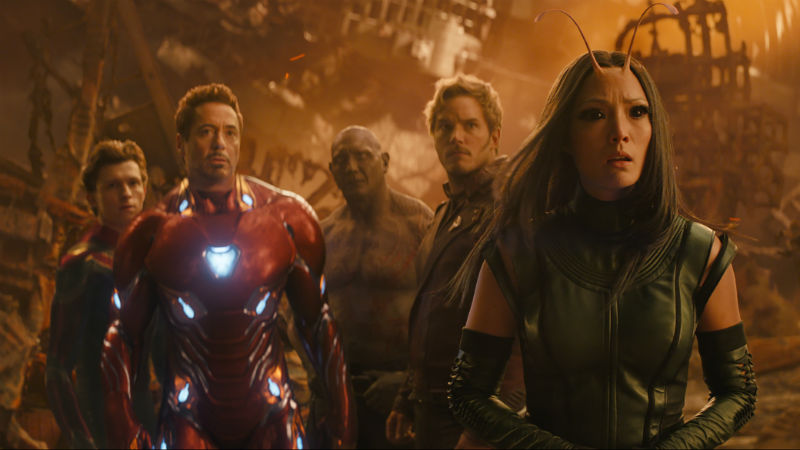 So far so good. But so much is piled into two and a half hours here that there isn’t enough time for the material which would really make the film get under your skin. For example, the romance between Iron Man/Tony Stark (Robert Downey Jr.) and his assistant Pepper Potts (Gwyneth Paltrow) is reduced to an early scene on earth and a later one where she is heard berating him over an audio comms link about going into battle and not coming home. There are lots of instances where one or two characters get a scene or two that you want to see developed but somehow it gets lost inside the bigger whole – Mantis (Pom Klementieff) and Star Lord/Peter Quinn (Chirs Pratt), Vision (Paul Bettany) and Wanda the Scarlety Witch (Elizabeth Olsen) – and there’s also the father and two daughters dynamic of Thanos, Gomora (Zoe Saldana) and Nebula (Karen Gillan). Good showbiz maxim: leave them wanting more. Trouble is, I’m not satisfied with what I’m being served here.

Then there are endless (well executed) fights between Thanos and assorted minions on the one hand and various Avengers or other good guys on the other. It may keep the fans happy, but it gets a little wearing after a while. Special effects, production design, cinematography, editing are all top notch but that does not in itself make a dirty movie. We need something more than groups of people in costumes flying through the farthest reaches of space and beating the crap out of one another on a series of planets with fancy names. 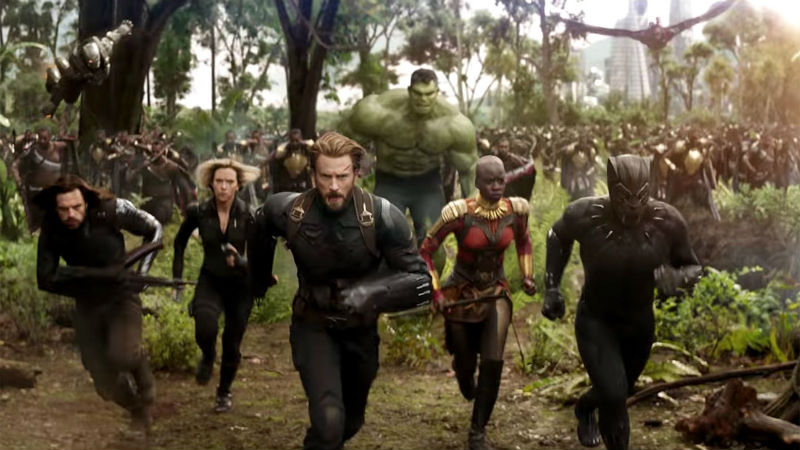 To be fair, after the commendable black bias of this year’s earlier Black Panther (title hero: Chadwick Boseman), that film’s characters crop up in the final third and are given a rather better airing than I would have expected: they feel like much more than a mere token black presence, which is to be commended. But even here, the sheer number of good guys – not to mention the villains and their massed armies – come at you so fast on the screen that it’s hard to feel any empathy for them. For the record, the film also includes the Hulk (Mark Ruffalo) and Spider-Man (Tom Holland).

Could the film have been otherwise given the sheer number of characters it crams in to its two and a half hours? In other hands perhaps it could. There are films out there like, to pick but one example, the thriller The Silence Of The Lambs (Jonathan Demme, 1991) which pack an extraordinary amount of plot and character into two or so hours. Here at the apex of the MCU, though, the franchise is the thing. You’ll have a wild time in the cinema but when the dust has settled, you may wonder where the gravitas was or what was the point beyond selling you the next set of Marvel movies. So really not very dirty at all.

There have been better Marvel movies – and better movies, period.

Avengers: Infinity War is out in the UK on Thursday, April 26th. Available on all major VoD platforms on Monday, August 20th.