The director revisits the main character of his earlier, three hour long My Sex Life… or How I Got Into An Argument/Comment Je Me Suis Disputé… (Ma Vie Sexuelle)(1996). Anthropologist Paul Dédalus (played once again by Mathieu Amalric) prepares to leave Tajikistan for Paris to take up a new job in the Ministry of Foreign Affairs. He remembers childhood trauma, political intrigue and the love of his life as a young man in and out of the Northern French city of Roubaix (incidentally Desplechin’s home town).

The childhood trauma involves irreconcilable differences between small boy Paul (Antoine Bui) and his mother Jeanne (Cécile Garcia-Fogel) which result in lengthy shouting matches between parent and child and the boy moving out to live with his grandmother while his younger brother and sister remain with their mother. It’s gripping stuff and lasts maybe ten minutes. The young Bui is a beautiful bit of casting: you immediately see him and think he’s Amalric as a boy. 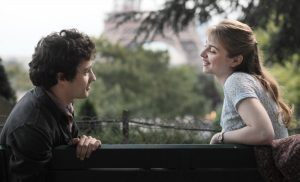 The political intrigue takes place when sixteen year old Paul (Quentin Dolmaire, who sadly looks nothing like Amalric or Bui and therefore defies believability as the same character) via his best mate Zyl (Elyot Milshtein), full name Marc Zylberberg, agrees to bunk off a school trip to Minsk so Zyl can deliver a package of money and other items to a refusnik community and Paul can give his passport to a refusnik teen who looks like him. It all goes horribly wrong, but because they’re privileged Western kids they return to France without too much difficulty. Shortly after this, the Zylberbergs move out of Roubaix and Paul loses contact with Zyl.

The story comes to light in the present day frame story when Paul is stopped at French airport customs owing to passport irregularities: specifically, a second Paul Dédalus holds a passport with many identical details. Again, it all works out fine. This episode runs about twenty minutes and feels less focused than the opener. 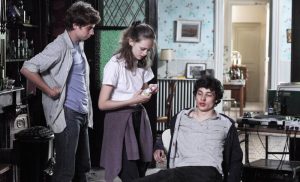 This leaves an hour and a half for the third flashback about the love of his life which again features Dolmaire as Paul in his student days, occasionally mediated by present-day recollection scenes featuring Amalric. It’s the story of his initially tentative, subsequently full on and finally disastrous romance with Esther (Lou Roy-Lecollinet, recently seen in I Got Life!/Aurore). She seems to have several men in tow from the moment he first meets her and their relationship goes from teaching her to play Go through passionate letter writing to a combination of letters when Paul is away from Roubaix and a consummated physical relationship when he’s there. Eventually, as he spends less and less time in that city, she dumps him for a rival who actually lives there.

The romance delivers some striking scenes. When Esther/Roy-Lecollinet enters a crowded party, she’s electrifying as the camera lingers on her. When she can’t say goodbye to Paul when he boards a train, you’ll be on the edge of your seat. But a few strong scenes among a lot of so-so ones does not a great film make. The relationship meanders all over the place with no sense of what was so amazing about it. When Paul embarks on an affair with the older Gilberte (Mélodie Richard) in Paris, you don’t particularly care.

And in a way that’s like the overall film. Someone looks back at their life. And…? What was so significant about that? What’s different, or remarkable, or special about them or their life? In this instance, it’s hard to pinpoint anything. Former cinematographer Desplechin ensures the film looks good overall, and his matter-of-fact shooting of sex scenes as narrative development rather than gratuitous titillation is to be applauded. Ultimately, though, his meandering script with its overall lack of focus proves an insurmountable obstacle.

My Golden Days is out in the UK on Friday March 16th. Watch the film trailer below: