In Jeanette Winterson’s magic-realist novel Sexing the Cherry ‘Time has no meaning, space and place have no meaning, on this journey. All times can be inhabited, all places visited.’ This very notion is permeable towards the sci-fi genre, specifically Alex Garland’s latest feature Annihilation. Roughly adapted from Jeff VanderMeer’s 2014 novel of the same name, the cinematic imprints of Stalker (Andrei Tarkosvky, 1979) and Arrival (Denis Villeneuve, 2017) are plainly in sight. Nevertheless, behind these influences rests a complex composition of human grief. As always with the fascinating genre, it serves as a mirror to which contemporary societies’ anxieties and fears can be projected and reflected upon. 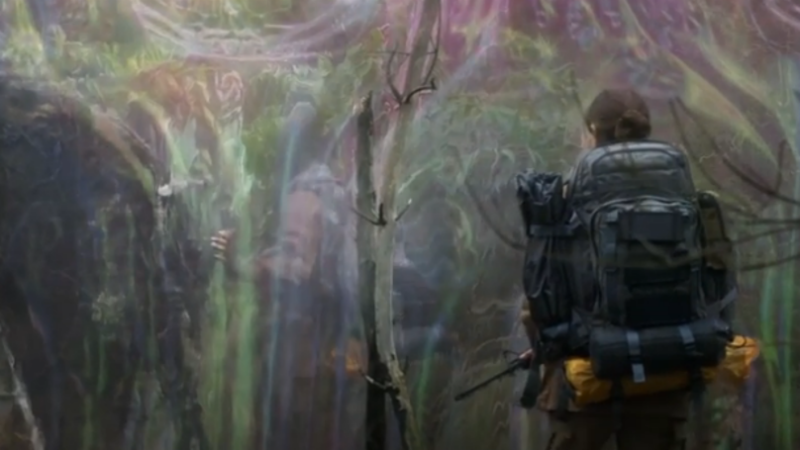 Following in the footsteps of Alex Garland’s first feature Ex-Machina (2015), the film opens with Lena (Natalie Portman) caged inside an interrogation room as Lomax (Benedict Wong) questions her. Compressed inside a radiation suit mask, the face of Wong is alien and unwelcoming. The nature of his cross-examination is a force known as ‘The Shimmer’ – a growing strange zone that takes no prisoners (in an apparent reference to The Zone in Stalker). Consequentially flashbacking to Lena in a state of deep grief surrounding her husband’s, Kane (Oscar Isaac), departure for a disclosed mission 12 months previous, life is a macabre affair aside from her biologist work.

Proceeding further back in time, Lena recalls being enwrapped in her lover’s company. Simply observing Rob Hardy’s colour palette in these scenes, it’s plainly a brighter time for both of them. Part of the military, Isaac’ brutish physique informs the viewer on everything about his demeanour. In his decision to initial interchange time, its swift employment creates an eerie imprint when Kane suddenly returns home. The result is a questioning of Lena’s mental state and recalls the chilling execution of the occult in David Lowery’s A Ghost Story (2017).

Jumping forwards, Lena is compelled to venture into ‘The Shimmer’ with a team of fellow scientist to discover the true origins of this alien force. Comprised of Dr. Ventress (Jennifer Jason Leigh), Thorensen (Gina Rodriguez), Sheppard (Tuva Novotny) and physician Josie Radek (Tessa Thompson), it is a team filled with some of the best minds. An antithesis to the U.S. Government’s previous designs of sending solely military men, including Kane, the new approach is a last chance to make it to the source The Shimmer – a lighthouse where a meteorite sparked the whole occurrence. 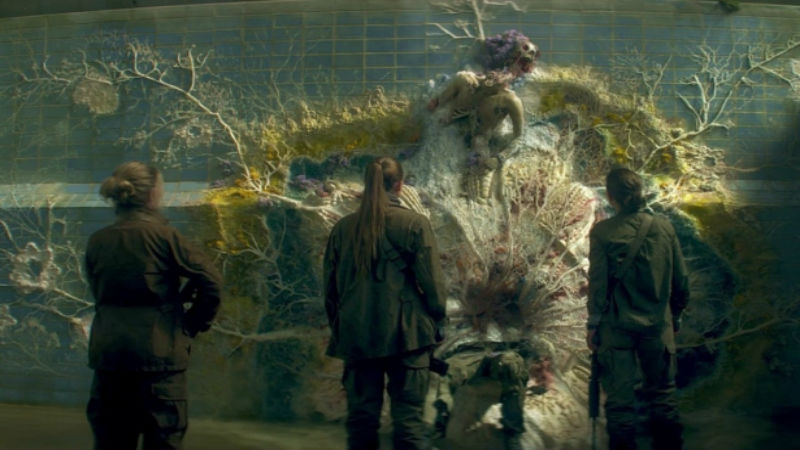 From the moment the team enter the alien environment, the production, art direction and design of the milieu entrances you with its beauty and danger. Dually eliciting both in the nature world of The Shimmer, as the team get deeper and deeper into its grasps, the more vicious nature’s power. Stated previous, evoking Tarkovsky Stalker is always a danger game to play, yet Annihilation’s powerful aura simply could not exist without the former. In this, the intuitive reaction to key scenes in Garland’s film are primitive moments of awe filled fear. Formulated with inventive CGI work from Milk VFX and Double Negative – who worked on Ex-Machina – the creature and natural surroundings that inhabit the screen are staggering.

Maintained by responsive performances from all the cast, particularly Portman who emulates the physicality of her lead role in Darren Aronofsky’s devilish Black Swan (2010), Garland follows up one sci-fi masterstroke with another.

After being dropped for theatrical release in the UK by Paramount for seemingly being too ‘intellectual’ for contemporary audiences, Netflix have picked up a genuine rare species of film. Sadly observing the film on my TV, its cinematic charm would only be heightened in an amphitheatre, as referenced with Sweet Country (Warwick Thornton, 2017; out in cinemas right now). Irrespective, Annihilation only reiterates that in contemporary film a piece can never be above an audience’s intellect. Working from the script to screen, Garland is slowly becoming a distinguished auteur, with his latest feature more than contributing generously to his stunning milieu.

Annihilation is out on Netflix on Monday, March 9th.

My mother on Tarkovsky’s dirty mirror

Tarkovsky reflected the image of his mother on the cinema mirror; can I do the same on this dirty website? [Read More...]