"Dirty gem"
Superb Australian drama with photography akin to Lawrence of Arabia paints a human, fallible, credible touching portrait of an aboriginal man, without ever resorting to clichés and caricatures - now available on all major VoD platforms

The adorning vistas of F.A. Young’s photography in Lawrence of Arabia (David Lean, 1962) are a testament to the 2.20:1 aspect ratio and the power of celluloid. Adopting a similar ratio (2.35:1) Warwick Thornton’s Sweet Country is a sweeping epic that tips its hat to those sand filled landscapes of Young. Set in Australia’s Northern Territory during the 1920s, Thornton’s Special Jury Prize winning film, received at Venice 2017, holds morality and the law close to its thematic chest. Enclosed with enthrallingly subdued performances and a requirement to be seen on the largest screen humanely possible, Sweet Country packs a meaty cinematic punch.

After killing a delirious white farmer in an act of pure self-defence, aboriginal farmer worker Sam (Hamilton Morris) is forced to flee into the desolate Australian landscape, and with it an odious bloody man hunt ensues. Lead by Sergeant Fletcher (Bryan Brown), the nearest town’s hierarchical leader, he is a man painted in shades of grey, not simply black and white. With touches towards his reserved romance towards a barmaid in the township, Fletcher is tinted with humanity, regardless of his brutality. Still, fuelled by the burning heat of the country, every sweat seeps off the screen into a curdle of tense anxiety. 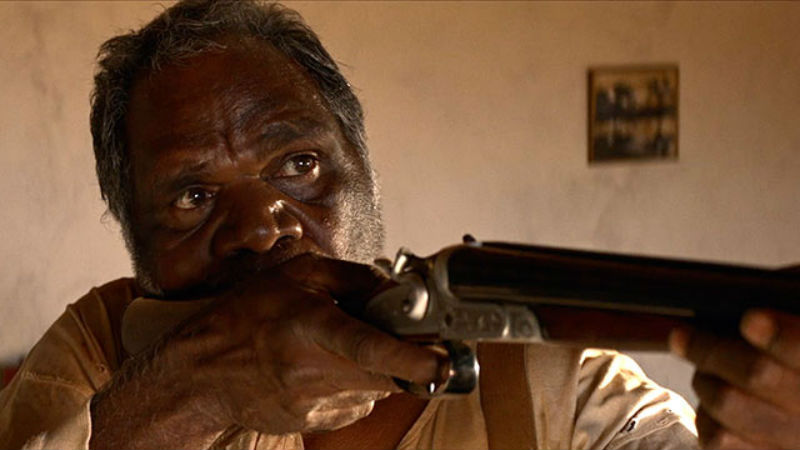 In the barren scenery, a disconcerting absence of justice permeates everyday life. To the white farmers Harry March (Ewen Leslie) and Mick Kennedy (Thomas M.Wright), their aboriginal workers are as lowly as their cattle. Required for the film to absorb the audience, in initial scenes, a bedrock of racial and sexist prejudices is established by Thornton. Handled with an agile touch, the abuse on screen is never deployed in sadistic practice. Practising Christian values in the most hellish place, Fred Smith (Sam Neil), works with Sam and his wife on a small plot of land where the couple have their own home. A stark juxtaposition to March and Kennedy’s treatment of their ‘property’, Archie (Gibson John) has been programmed, most likely through violence, to call every white man he encounters ‘boss’. Though the phrase is used by Sam similarly, the lexical repetition of the noun in Steven McGregor and David Tranter’s script constantly elicits white supremacy.

In the hands of a lesser director, Hamilton Morris’ Sam could have been deployed as a noble savage figure, outlined in Michel de Montaigne’s essay ‘Of Cannibals’. Thought at its time of creation a liberal and genuine notion, it is an idea one that seeks to divide natives into a category. Selecting to imbue Sam with complexity, Thornton offers an empathetic perspective to his lead character and his wife (Natassia Gorey Furber) – away from the noble savage theory. Sam is a fully fleshed out human being and not just a caricature or silhouette for white notions to be projected upon. 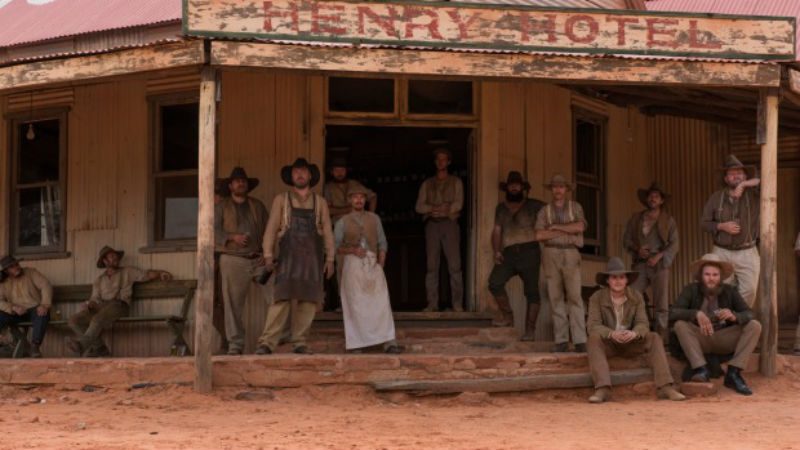 Recalling the harsh realities of the wild in S. Craig Zahler’s Bone Tomahawk (2015) – whilst recanting the sweeping grandiose of Dee Rees’ Mudbound (2017) – Sweet Country requires to be seen in the cinema, away from screaming. Unlike Rees’ film, thankfully Thunderbird Releasing are handling the proper theatrical run of film and not Netflix. Comparable, Alex Garland’s latest feature Annihilation will suffer the same fate of being restricted theatrically in the UK to the small screen. Thornton’s epic is a timely reminder of cinema’s place in an amphitheatre, and not at home.

The director Warwick Thornton is of aboriginal background himself. His mother Freda Glynn founded and was the first director of the Central Australian Aboriginal Media Association (in the remote Alice Springs).

Climaxing with a moment of pure compassion, knowing little about the film before viewing, it’s hard not be in awe of Sweet Country’s stirring its cinematic and poignant trappings. A true knockout from down under. It is showed in cinemas in March. It’s out on all major VoD platforms on Monday, July 2nd.

Alasdair Bayman is a recent graduate of English Literature at The University of Manchester...

Kiwi director of James Bond uses family violence as an allegory of colonial violence, in an epic Maori tale of love and oppression [Read More...]

Look at the guarani-kaiowá indigenous people of Brazil in the eye, plus experience their culture, spirituality, strength and revolt firsthand, as they engage in a battle against eviction and genocide - screening on April 19th [Read More...]

The never-ending war: American WW2 veteran has to fight against racial segregation on his very turf upon returning from the battlefield abroad - in cinemas [Read More...]