Yugo-nostalgia checks into the present!

Swiss-born director Nicolas Wagnières talks about his film Hotel Jugoslavija and the Balkans, a region grappling with nostalgia of a defunct country as well as the rise of nationalism

Enjoying its European Premiere in the Panorama Section of the Berlinale last month, Hotel Jugoslavija is latest film from Swiss director Nicolas Wagnières. Telling a personal story about his relationship with the hotel in Belgrade and its symbolic relationship to a country that no longer exists, the film is a mesmerising documentary about identity, nationalism and nostalgia.

Our dirty writer Redmond Bacon attended the event and sat down with the director to discuss why he was drawn to the hotel, why Yugo-nostalgia persists and the current rise of populism in Europe.

Redmond Bacon – Where did the idea for the film first come about? When were you first inspired to make it.

Nicolas Wagnières – The very first idea was unconscious in a sense. I did a shooting for my diploma film in 2005, for the film school in Geneva, and my inspiration came from [visiting] Belgrade. I did some short fiction in the flat of my grandparents there. And for the film I had to find a hotel for one scene and I found the Hotel Jugoslavija. It was still open and I was [spoke] with the employees. They were very nice and curious about my interest. And I learned that the hotel was about to close, it was privatised, it was about to be transformed into a casino, and I said, I have to do something with this.

RB – The name has not changed. The fact that it’s still called Jugoslavija represents a certain Yugo-Nostalgia. This is very strong for some people. Why is there such a strong nostalgia in countries such as Serbia and Bosnia for Yugoslavia when it was still an authoritarian regime?

NW – That’s a difficult question, and as I say, my particular position is I haven’t lived there. I didn’t experience the regime. As far as I know it was still authoritarian, but it wasn’t like Stalin. Yugoslavia did a split with the very hard-line communists. And without judging the political I was more focusing on the level of it [being] an alternative. There was something like East, West and this country trying to do a third line. I think within the socialist regime, there is something that always goes with the identification to the country that is really stronger. And the country, I mean it ended really badly, but it had a nice golden time.

[Josip Broz] Tito was very charismatic, maybe a bit too extravagant with the film stars, with his way of showing off, so I think that’s building some very strong identification to your country. So when all this falls apart you miss some like Father Figure almost. When you think about a country that only exists because of one man and disappears when this one man leaves, something is wrong. The country should be still going without it.

NW – Yeah kind of. The very difficult social economic situation that came after the war, after the corruption, after all these awful things, I can understand that people think of some better times earlier with some nostalgia.

RB – I want to talk about Serbia in general about how it might be viewed by the outer world. You end the film with a shootout scene [from Luc Besson’s Three Days to Kill, 2014]. In traditional Hollywood movies, there’s a stereotype of Serbians that they are petty criminals or gangsters. Why do you think this endures so much?

NW – It wasn’t that much [of an] intention. I’m wondering why they came to Belgrade to shoot this scene. For me, this film goes more in parallel with this other fiction that goes in the film, with the 1970s Black Wave Yugoslavian film. Which is more for me to say how is this building used in its image, and how can we relay it to a moment of the society? In the 1970s movies, I think [its] more of a powerful critique. These anarchist gangsters go partying and have drugs and sex and alcohol in this building. It’s a strong meaning. And today we rent it to some Luc Besson, EuropaCorp massive production that explodes everything. Its more about the value that this building is carrying within its image in a film. And the figure of the Balkan, I don’t know, something is always a bit stereotypical. I mean, there’s strong mafia in Balkans, Montenegro is supposed to be a massive entry for drugs. So it’s not only an image you can have I think. 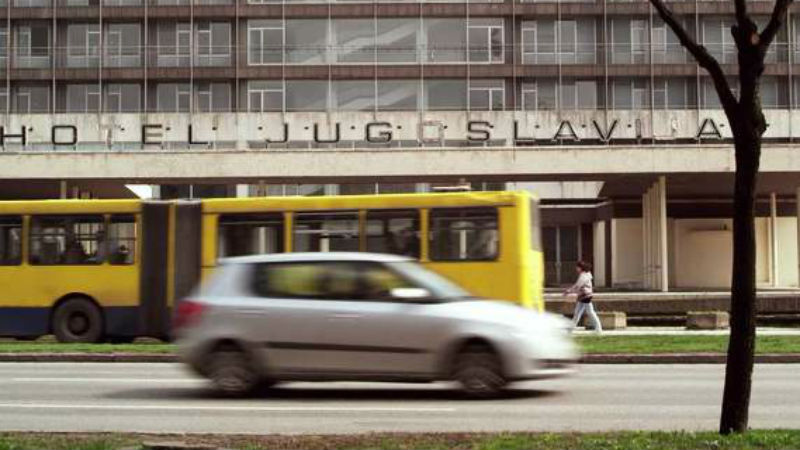 RB – So about 7% of the population of Switzerland is Balkan, and I wanted to know what the relationship between the two countries was. Why did so many people moved to the country from Yugoslavia?

NW – Switzerland has always been more prosperous than other neighbours. When I was a kid my mum was already a seasonaire — coming to work for one season. At the time they could have [a] work permit for nine months. Before it was the Italians who came to Switzerland, then Yugoslavians. My grandfather did his studies at the polytechnic school in Zurich. As people from Yugoslavia were not completely stuck in their country, not all the family but part of the family could move and study abroad and come back. Exchanges were made, and Switzerland has always needed a stranger population for its economy.

RB – There’s a lot of archive footage for the film? How did you find it?

NW – Mainly big searches at Television Serbia. And a structure called Filmske Novosti, which is the old news on film. [Typing in] “Novy Belgrade”, “Hotel Jugoslavija” keywords and spending time watching rolls and rolls. I found all the 1940s, 1950s material there. Then I had precise ideas. Because the film took some time, I had time to hear on the internet there was some footage just after the bombing by Nato. The Interior Minister came to shoot the thing, so I knew it existed. I tried to find out about this footage.

If I had to find out everything in two months it wouldn’t be so interesting. But because of the time, somebody told me about this 1970s movie Young and Healthy as a Rose (Jovan Jovanovic, 1971) – it’s amazing, everything happens in the hotel. And then you find out on the internet there’s a film shooting with Luc Besson, because people post pictures and you see it and think it looks funny. Finding image[s] where the hotel was used— it could be advertising, it could be [a] video clip or whatever —was not just illustration but it would support a real subplot narration for the film. 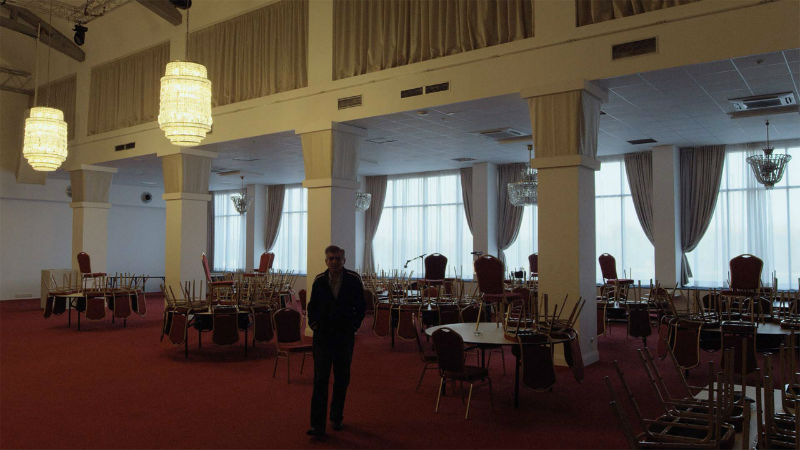 RB – The film is only 78 minutes. But how much did you shoot in total?

NW – The shooting was organised at three different moments. The first moment was in 16mm, so with this material we don’t shoot gigabytes — you just shoot rolls. We had an hour for the first images. And the other one we shot on digital so we had a lot of material. Only 5% is used, I couldn’t tell exactly. We went all throughout the building without any real intention apart from filming the state of this place. [There] was a very big work on the editing table to find how to construct this — there’s basically three moments where we see the building in this different state. But yeah we used a small amount then.

RB – Did you have the narration in your head before it started or did it come later?

NW – I think the populists [are] pretty strong in Switzerland as well. The right party has a lot of power in the election, and Switzerland is against Europe. Well I think that we are at a moment that politically, socially, economically, we didn’t find out the right way to really understand what’s happening with the immigration question. What is it exactly, what is it[s] meaning after colonialism and all the wars and the Western world there? And we are at the start of understanding the new implication of all of that. It won’t be the solution to close border[s]. This will just go to civil wars or massive violence. I don’t have the answer. 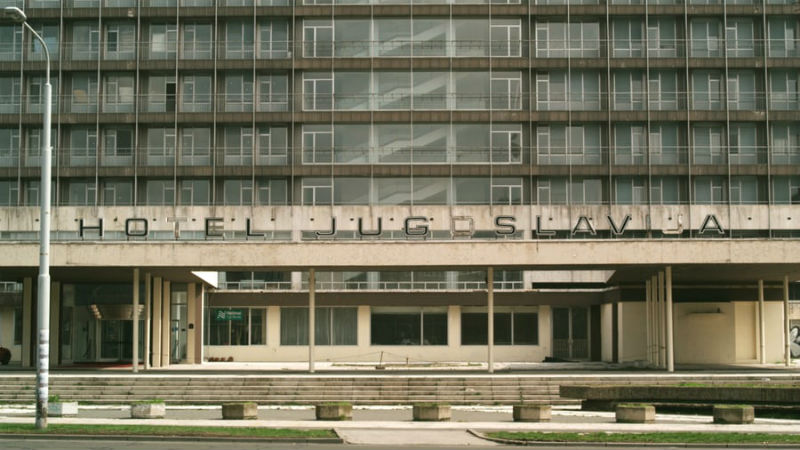 NW – I don’t think it’s important to keep. It’s my first time in Berlin and I haven’t seen much. I’m sure Germany is still not that clear about its past and its own history and I’m sure they are kind of in between two ways of wanting to erase something and wanting to keep [it] at the same time. Serbia still has big work to do. They still don’t recognise the concept of genocide, so they could make a memorial for what happened in Bosnia. It’s not so much keeping the building in a museum[-like] ideal, but respecting history somehow and where you come from. I don’t know whether it’s better to keep the thing, but just to destroy [it] completely and have no respect for architecture or cultural value – that may be a problem.

Death in Sarajevo (Smrt u Sarajevu)

The red Danube: the wounds of genocide carried out by Milosevic in the Balkans show in the walls, on the land and even in the waters of the River Danube - hypnotic documentary entrances audiences and takes home the main award at the Open City Documentary Festival in London [Read More...]