"Greasy movie"
In the name of the Father, the Son and the Holy Flag! Latest movie by emblematic Texas director has his usual realistic and humanist streak, deep diving into the world of three war veterans grieving over the death of a young soldier (the son of one of the men); sadly the anti-war message eventually gets a little diluted in nationalism - in cinemas

American identity is intimately associated with military belligerence. The country thinks, eats and breathes its wars. The establishment thrives in perpetuating military conflicts, even when it has to lie and engage in completely unnecessary action merely for political gain (as Spielberg investigates in The Post, also in cinemas right now). And the average American – particularly males – more than often see their lives inextricably connected to bloodshed and tragedy.

The three males in Richard Linklater’s Last Flag Flying all bear scars of the Vietnam War, where they served together. Sal Nealon (Bryan Cranston) suffered brain damaged, and has experienced a life on benefits, while Mueller (Laurence Fishburne) has a bad leg. The third man Larry “Doc” Shepherd (a deliciously avuncular Steve Carell, pictured below) bears psychological scars: he ended up in jail for two years for a BCD (which stands for a “bad conduct discharge”, or, as he prefers to call it, “best career decision”). The movie takes place in December 2003, nine months after the illegal occupation of Iraq began. 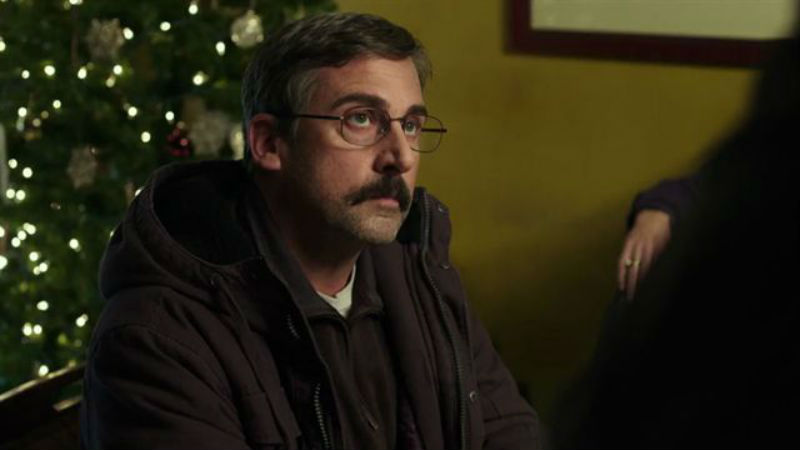 Larry turns up at Sal’s private and pretty run-down watering hole. They soon fetch Mueller as the three men embark on a road trip in order to attend the funeral of Larry’s son, a young Marine killed in Iraq. They go to Arlington National Cemetery, only to find out that the body is in a difference location in Delaware. And so their funereal quest goes on.

This is a superbly acted film with a multi-threaded script meandering gently through issues of race, religion (Mueller is black, and also a preacher), ageing, failed masculinity and the consequences of war for American soldiers and their families. The depth of the dialogue and the performances is remarkably profound. There is a conversation on a train, as the three man take the coffin back to Larry’s home in New Hampshire, that’s particularly moving. You too will brood and laugh over the conversation as the three men reflect about the meaning of war and reminisce about their sexual adventures in Vietnam three decades earlier. 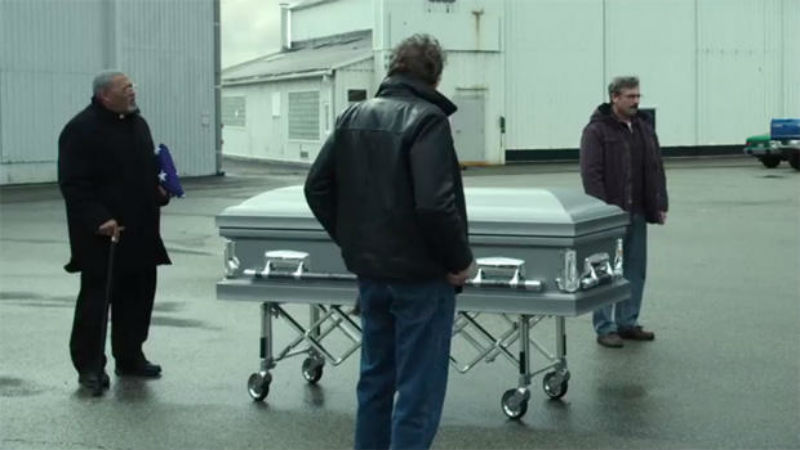 The first 110 minutes of this two-hour film come across as very anti-war. Larry questions the conflict, the lies about weapons of mass destruction and he even refuses to give his son a military burial, instead taking the body back home in order to bury him in his school attire (instead of the military uniform). But then Linklater finds a very strange and unexpected closure to his film, perhaps a change of heart. The unflinching duty to serve the country is the message lurking in the background throughout the entire film, and I got the impression that the filmmaker was going to kill this possibility in the end. But instead the message comes full circle. It’s precisely in having served the country that these men find redemption. And their son, too.

This is a film that attempts to be anti-war, but ultimately slips into jingoism. The director proposes patriotism as the solution to war, but this is a fallacy. Patriotism is the very root of war, and so it can’t be used as a remedy. This proposition is like the “hair of the dog”: a misleading solution that ends up perpetuating the problem (in fact, the canine expression is used by Sal in reference to his own alcoholic predicament). “The last flag flying” is not synonymous with “the last man standing”. A flag is no substitute for a human being.

Last Flag Flying is out in cinemas across the UK on Friday, January 26th.