"Greasy movie"
It’s a small world (after all)! Husband and wife Matt Damon and Kristen Wiig are shrunk to miniature size along with many other volunteers in an attempt to cut down consumption of the Earth’s limited natural resources – in cinemas

This being a Hollywood movie, you may find yourself worrying you’re at the right film when it starts off with a Norwegian scientist in a lab. No matter: it soon goes through momentous discovery to big international conference where one Norwegian scientist takes to the stage and opens up a box to reveal another of his colleagues – who has been ‘downsized’ and is now a mere five inches tall. It’s the solution to too many people living on planet Earth with its finite and inadequate resources.

Cut to people watching this on TV in public spaces, among them occupational therapist Paul Safranek (that American everyman Matt Damon). He and his wife Audrey (Kristen Wiig) are currently experiencing budgetary problems and over the next few weeks and months they discover couples that they know who have ‘downsized’ and think it’s the best decision they ever made. 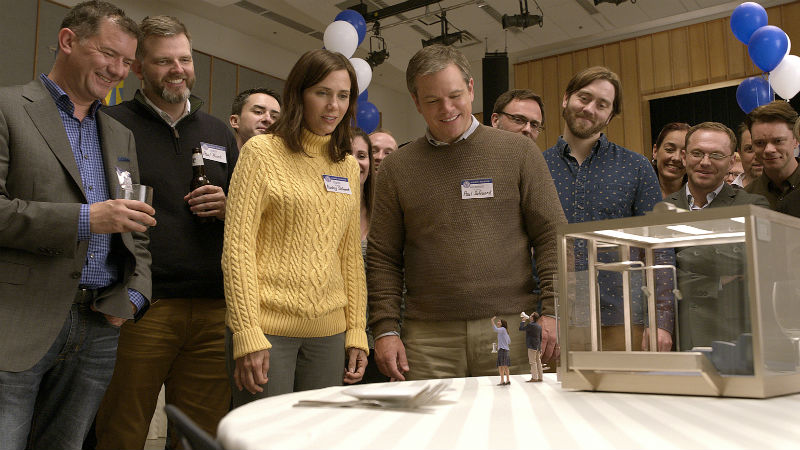 So the couple take a visit to Leisureland, a miniature resort where ‘downsized’ people live after the non-reversible procedure. They learn that if a full-sized person becomes downsized, the financial assets of an average income would turn from just about enough to get by to a millionaire’s income. They’re hooked, the paperwork is signed, the process undergone.

On the other side of the process, it all seems too good to be true, although Paul isn’t really sure if he fits. He is even less sure he likes his constantly partying, Serbian upstairs neighbour Dusan Mirkovic (Christoph Waltz) and his business partner Konrad (Udo Kier). And as Paul watches the TV news he learns there are global issues with the process too: people in repressive regimes are being downsized against their will, such as Vietnamese activist Ngoc Lan Tran (Hong Chau). Who one day turns up as the head cleaning lady in charge of a small posse of cleaning ladies tidying up Dusan’s flat after one of his parties.

If this seemed initially like a utopian existence, Leisureland turns out to suffer from all the financial inequalities that beset other human societies: there are haves and have-nots. Tran takes Paul to her home in the hope that he can administer medicine to her seriously ill flat-mate – on a bus through a vast tunnel to outside the Leisureland complex where the poor live in substandard, run down blocks of flats. The narrative has stranger things to deliver still, as Dusan takes Konrad and the other two to visit the original downsized Norwegian colony… 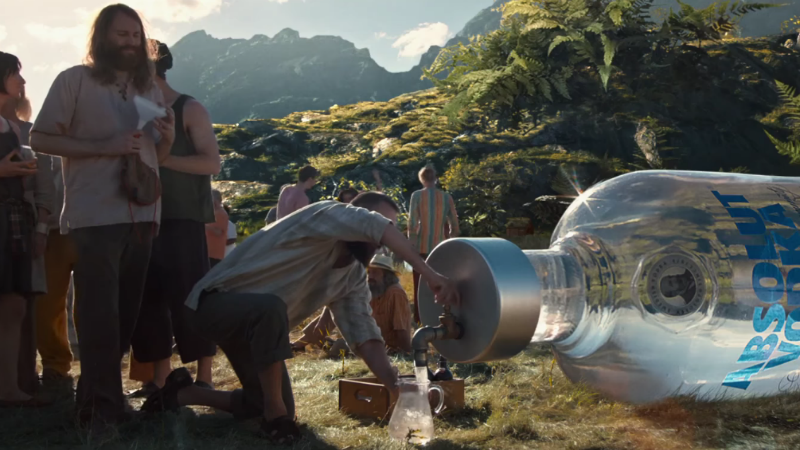 Sadly, however, while downsizing is a visionary film brimming with radical concepts it’s equally an infuriating narrative exercise where potentially rich ideas, themes or characters suddenly appear only to disappear shortly afterwards before they can be fully explored. So for instance, the ill neighbour for whom Paul supplies inappropriate tablets which Tran gets her to ingest one week is gone when he visits the next week. What happened? “Oh, she died”, says Tran matter-of-factly. No shock, no grief, patently unbelievable. Something similar happens towards the end of the film when Paul, in an episode with the Norwegian scientists’ colony worthy of When Worlds Collide (Rudolph Maté, 1951), has to decide whether or not to accompany the departing colony members into a huge Brave New World deep underground.

Were it not for such serial errors of judgement, this could easily been the film of the year. It’s still worth seeing, though, despite its faults.

Downsizing is out in the UK on Wednesday, January 24th. Watch the film trailer below:

You won't die laughing with this extremely long, caustic and strange Scandinavian comedy, but the movie does have some arresting and clever moments - Palme d'Or winner is in cinemas Friday, March 16th. [Read More...]