Ever wondered why people support Brexit? Three mainstream films from the past 12 months provide a clue: British cinema is infested with nationalism and anti-German/European resentment

The past 12 months saw three major British war drama hit UK cinemas to a lot of noise. All three dealt with WW2. First came Jonathan Teplitzky’s Churchill last June, then the following month Christopher Nolan’s Dunkirk was released, and finally Joe Wright’s Darkest Hour – with an Oscar-baiting performance by Gary Oldman, pictured below twice – was launched last Friday in cinemas across every corner of the country.

The fact that these three films take place during WW2 isn’t the only similarity they have. These movies also have a subliminal message of tub-thumping nationalism and anti-German resentment (and, by extension, anti-European) in common, which resonates with Brexiters. In other words, while not overtly pro-Brexit, these movies instill a sense of self-righteousness and moral superiority in the British people. The analogy is quite simple: the Germans are evil, Europe is under their control and therefore we must out. 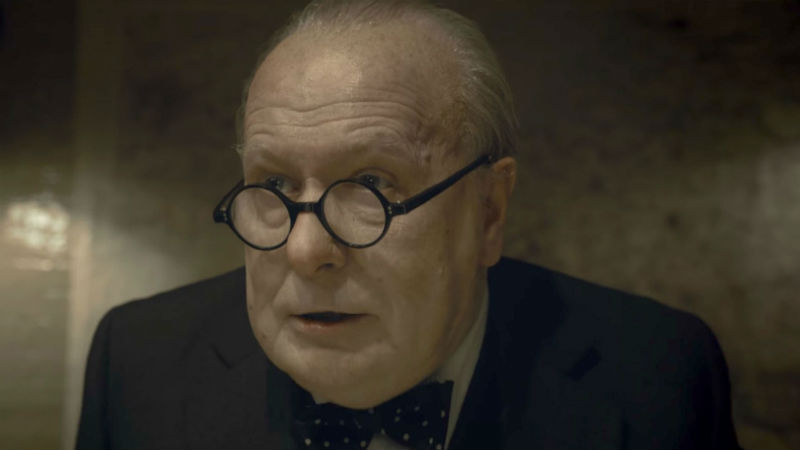 The writing is NOT on the wall

I’m not saying Teplitzky, Nolan and Wright are rabid nationalists and everyone who worked on these films is pro-Brexit. Subliminal messages are far more nuanced, often beyond the control of the filmmaker. They are driven by a much broader historical narrative that paints British soldiers and Churchill as heroes as the Germans as plain evil. There’s a dangerous Manichaeism, which conveniently omits the dark side of Churchill and the British Empire. It’s hardly surprising Nigel Farage (pictured at the top of this article) loved Dunkirk so much, and I would hazard a guess he would also like the other two films.

Churchill was not an nice human being. He was indeed an excellent war strategist, but also a ruthless one for that matter. He is directly responsible for the deaths of three million people in the Bengal famine of 1943. Churchill was driven by nationalistic values, not by solidarity with people in gas chambers. He was similar to Hitler on many levels: he was a racist, a vocal advocate of gassing and an outspoken supporter of eugenics (he once wrote: “I feel that the source from which the stream of madness is fed should be CUT OFF and sealed up before another year has passed”, in reference to “the unnatural and increasingly rapid growth of the feeble-minded and insane classes”). 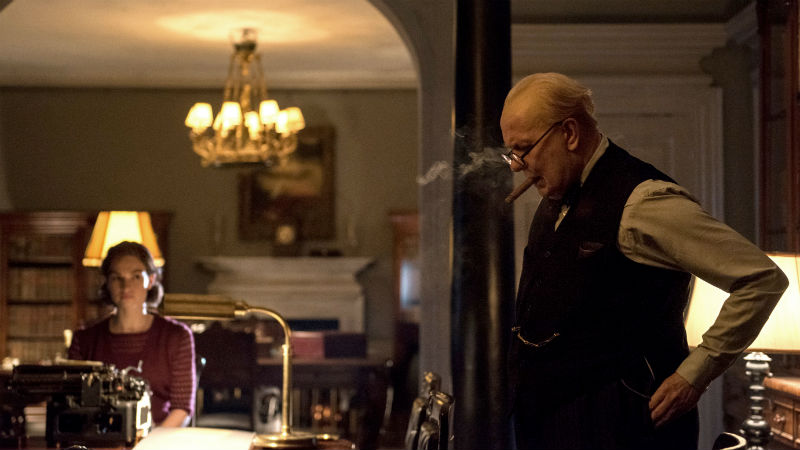 It’s also a mistake to think Churchill was pro-European and would likely be anti-Brexit (I used to think this myself, until I was challenged by one of our sharp readers). Churchill indeed believed in a United States of Europe, but he did not envisage the UK being part of it. His imperialistic values did not fit in with European unity. He once famously said: “We have our own dream and our own task. We are with Europe, but not of it. We are linked but not combined. We are interested and associated but not absorbed. If Britain must choose between Europe and the open sea, she must always choose the open sea.”

All in all, our mainstream cinema lacks historical balance and perspective. The perpetual demonisation of Germans and celebration of “the greatest Briton ever” in British films has played an instrumental role in energising nationalists, thereby letting the ugly beasts of xenophobia, racism and Brexit prejudices out of the cage. And now they are out of control, and no one seems to know how to capture and lock them up again. Under the Brexit logic, Brits are celebrated as war heroes, while Europeans are denounced as ingrates.

Below are some thoughts on the three films mentioned above, and why they help to bang anti-German/European resentment and thereby stoke up the Brexit narrative:

In terms of message, Churchill is not too different from your average BBC period drama, or a film you’d catch on the History Channel. It celebrates British superiority ad infinitum. It comes under the disguise of exposing the frail and errant side of a mighty leader, but ultimately the message is quite straight forward: “the greatest Briton of all times may have been a little shaky and moody, but he cared about our soldiers and knew how to win the War. Great lad! Britain rules!”

Churchill’s boundless altruism is also constructed in the film. He has the most profound and genuine concern for the lives of the British soldiers, and he’s even willing to make the wrong decision in order to spare human lives. The film conveniently forgets that Churchill wasn’t such a pure and kind human being, and that his altruism was highly selective.

This is a movie about withdrawing from Europe, a heaven-sent analogy for frothing Brexiters. But that’s not all. It functions like a adrenaline-inducing video game or canticle, which can be easily misinterpreted. The Hans Zimmer electrifying soundtrack plays out at 140 bpm, in a tandem with your heart. Highly suggestible young people will undoubtedly leave the cinema subconsciously thinking: “wow, this is so cool. War is like a video game, what a wild ride, I want to be part of it”.

Plus there is no blood in the film, which was a conscious decision by Nolan so that he could get a PG13 certificate in the US and a 12A in the UK. These youngsters will think, again subconsciously: “war is not a bad thing at all. Worse that could happen is I will get covered in slime. I won’t get covered in blood”. That’s why a war movie should never be sanitised and made palatable to young people. These are the young people who Nigel Farage wants to recruit for his patriotic and xenophobic cause.

According to this film, Churchill was a solo male figure who, in spite of his fellow parliamentarians’ doubts, stood up against a ruthless German superpower to guarantee Britain’s sovereignty. He even got a popular plebiscite mandate in an imaginary Underground sequence. Ever since the July 2016 Brexit referendum, the UK has faced an onslaught of modern Britain’s most idolised political hero. From polymer £5 notes to Churchill and Darkest Hour, there’s a creeping feeling that we’re gearing up for an epic battle.

War drama about Churchill's rise to power and crucial decision whether collude with the Germans has an spectacularly boring screenplay, plus it's infested with tub-thumping nationalism - on Netflix on Tuesday, August 16th; also available on other platforms [Read More...]