A meal laced with family feuds and sexual demons, West Hollywood transsexual prostitutes, Dantesque critters ready to devour Santa Claus, a hellish shopping spree and lots of violence - what else could you possibly wish for this Christmas?

In a perfect world, Christmas is filled with some of the most jovial depictions of family, friends and community. But this is 2017, with grotesque creatures such as Donald Trump and BoJo calling the shots and presiding over our future! In this light, it is out with the Frank Capra’s It’s A Wonderful Life (1947) and in with some of the dirtiest Christmas related films to have ever graced celluloid.

Though not a direct overview of the dirtiest Christmas films to have graced 2017, such a soiled list instead looks at the films that play against conventions of the festive period, character stereotypes and outright devour Santa’s nice list, revering to the naughty one instead. 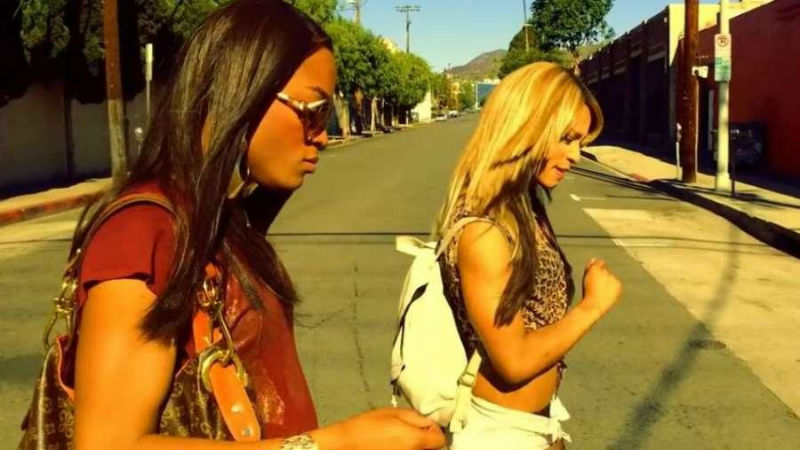 Christmas does not have to included mince pies, snow or presents. In Tangerine (also pictured above), a message of forgiveness and acceptance comes in the shape of a wig traded between two quarreling transsexual prostitutes in West Hollywood. Rejecting the casts of Christmas, Kubrick’s Eyes Wide Shut decomposes the meaning of family. Each time Tom Cruise’s Dr. William Harford returns home, his wife and child are asleep with the Christmas lights creating some atmospheric red lighting to deepen his lustful thoughts. Similarly, the streets of New York city are a vacuous space in which humanities basest desires come to the forefront.

In Elle, starring Isabelle Huppert (pictured at the top), Verhoeven chooses to lace the Christmas meal with sexual tensions, family feuds and dark comedy. Lastly, the likes of Gremlins and Krampus literally have their cake and eat it when approaching the notion of a calm and quiet Christmas. Instilling the holiday season with sheer horror and creatures that snarl and devour, Dante and Michael Dougherty create a stark juxtaposition to the traditional values of the season. Replacing the red wrapping paper is the red of blood.

Sit back, relax and enjoy these rebellious films to Christmas traditions and representations! Have yourself a dirty little Christmas!

Before The Florida Project (released earlier this year), Sean Baker crafted a truly sumptuous Christmas film about two transgender prostitutes who search the mean streets of West Hollywood on Christmas Eve for Sin-Dee’s (Kitana Kiki Rodriguez) pimp and boyfriend Chester (James Ransone). Suffused with foul language and the skirmishes of ethnic and sexual minorities, through it all a level of forgiveness and acceptance is discovered. The contrasts of a Christmas setting with the scantily glad characters is extended in the hip-hop dubstep score, serving to go against the grain of festive songs, and induce one into the world of Sin-Dee and Mya. Filmed on an iPhone with Filmic Pro app, it captures the rawness of human emotion in a fashion now characteristic of Baker’s filmic style. Instead of a Christmas tradition of Miracle on 34th Street, Tangerine should be your new annual festive watch!

Paul Verhoeven’s Elle is a tale that reverts patriarchal notions of society, religion, and one would suggest Christmas, to Michèle Leblanc’s eventual revenge on her rapist. Casting a long shadow over those around her in a room, the gravitas to which Isabelle Huppert brings to the character infuses her with an emotional tapestry. The Dutch director is no strange to provocative filmmaking and this Christmas time why not enjoy the magnificent Isabelle Huppert as an early gift to yourself? Using the subject matter of family and the bourgeoisies in France, the Dutch director and iconic French actor combine to offer a deeply sardonic take on a Christmas meal that goes awfully wrong. The religious elements of the Christian tradition are similarly called into question over its narrative. Costumed by Nathalie Raoul, Huppert is at her finest Parisian chic. Who said it wasn’t the most wonderful time of year?!

No dirty alternative Christmas film list would be complete without these pesky little creatures and their complete and utter destruction of a small American town (Kingston Falls). Accompanied by the literal destruction of a modern Christmas, Gremlins is as rebellious to the notion of consumerism as the little critters are to any human being. Joe Dante brings Dante’s Inferno to the festive season. A dirty classic in every sense of the word.

Featuring a drunk Christmas office party and the ramifications that feature when one drinks too much around someone who you hold a crush towards, Billy Wilder, Jack Lemon, Fred MacMurray and Shirley MacLaine star in this misery infused classic about how unfestive Christmas and life truly can be. With some of the finest dialogue in film, Wilder crafts a stunning piece of dark comedy.

The pick of the modern phenomenon that is an annual horror related Christmas film, 2015’s Krampus plays with the idea of wicked malevolent forces arriving to commandeer Santa’s favourite season. The Christmas spirit is replaced with death, fire and evil demons coming to ruin your presents and much cherished family.

Terry Gilliam and a dirty Christmas film you said, yes, you are correct! Occurring in a time and place alternative to ours, with an examination of bureaucratic regimes, Christmas shopping is represented by Gilliam as it really is: HELL!!!

A Snowman and Michael Keaton should, in theory, make for perfectly harmless viewing on a cold winters evening. Well, think again as in Jack Frost, Keaton plays Charlie Frost’s (Joseph Cross) deceased father who comes back from the dead and becomes a living snowman who attempts to make amends for his failures as a father. Besides this strange plot, the character design of the snowman is a far cry from the cute Snowman from The Snowman cartoon of 1982. Less walking in the air and more walking with a palpable sense of horror!

Every year there are always films which are considered absolute stinkers and none more than so wannabe Tomas Alfredson’s Nordic noir. Set in the depth of winter with a serial killer on the lose who cuts off the heads of women and then places them on snowmen, and who appears to have the artist brain of a four-year-old, this thriller deserves to be featured on this list simply due to its awful promotional campaign. Leaving your Christmas spirits very lukewarm, its dirtiness derives from the hilarity that ensures at its bad premise and strange acting.