"Dirty gem"
Heavy-hearted Romanian drama about man succumbing to TB during Interwar period reflects on our vulnerability, mortality and triggers of the intellect - watch it now with ArteKino

Following the autobiographical writings of Max Blecher in his continual struggle with bone tuberculosis and constantly plagued by being bedridden, Scarred Hearts is Romanian director Radu Jude’s latest feature, dealing with a plethora of heavy and macabre themes in 1937’s Romania. Accompanied by a distinct visual style and gorgeous academy ratio, it’s a bold piece of European cinema that’s not afraid to patiently let a scene hold and play out, whilst slowly captivating you with its profound writings and opaque poetry. 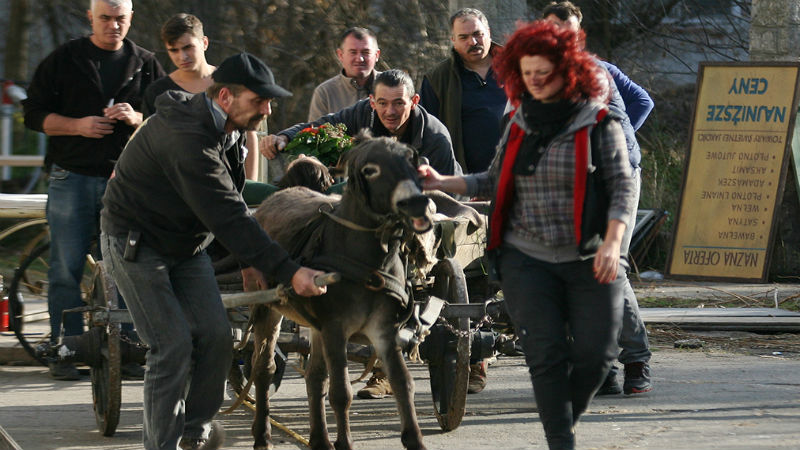 After visiting a hospital with his father, 20-year-old Emanuel (Lucian Teodor Rus) is instantly submitted to long needles, a full back cast and regular operations to keep his tuberculosis at bay, while it slowly eats away at his back. Lacking any sort of establishing shot or location building, Emanuel – and audiences likewise – are instantly confined to the walls of hospital, accompanied by the vistas of the Black Sea. This period setting imbues the film with a sense of transition between two pivotal moments of modern human history, the two great wars. Just as Fascism and Hitler ate away at an ideologically weakened Europe, so does the tuberculosis to Emanuel’s back. In drawing away from setting its narrative during any conflict, Scarred Hearts channels Brady Corbet’s stunning debut Childhood of a Leader (2015) in choosing to explore a pre WW2 Europe – a film which deserves to be seen by more.

Bestowed with a youthful and fragile body, Teodor Rus’ physicality adds a layer of melancholy to the depiction of a youth being stricken down by an incurable illness, even if the doctors testify otherwise. Debuting for the first time, it’s a performance which is so tricky to capture. In the cinematography Marius Panduru, his bed bound action is caught from a side on perspective and rarely in any close shots, broadening the space which Emanuel and his bed hold in the frame. Rus’ performance is all the more impressive in his character’s constant state of institutionalised paralysis. 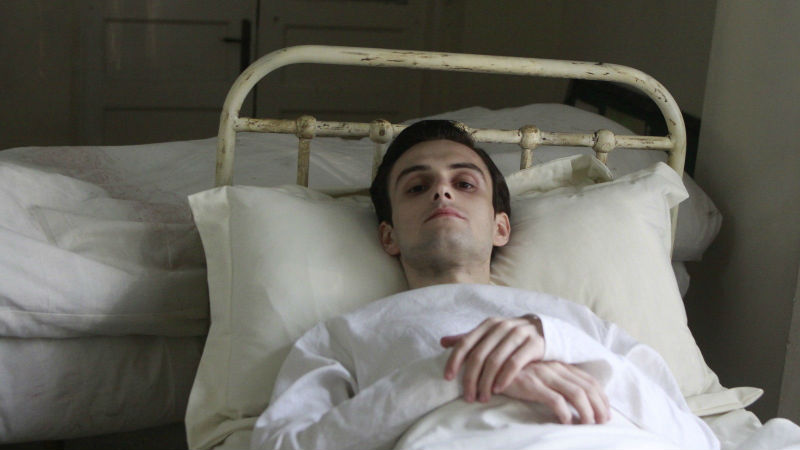 Adopting the period setting in the minutest detail, Christian Niclescu’s production design gives the hospital a strong conservative design. Filled with chequered tiles and baby-blue walls, as Emanuel’s health declines, so does the joy which fills these walls, from intellectual debates to sexual relation, resulting in a relationship, with himself and another part time patient Solange (Ivana Mladenovic). These former deeply intimate acts are captured in the words of M. Blecher which intercut the visuals. To some, this may be a hindrance on the narrative. Still, the voids of darkness which fill the white words in the centre of the screen elicit the emotions of Emanuel in a mature and delicate manner and hold the calming nature of poetry in Jim Jarmusch’s tantalising Paterson (2016).

Filled to the brim with themes such as what stimulates the intellectual, the mortality of man and the futility of illness, Scarred Hearts is a heavy, decadent sitting that brings despondency to the brain even after its final scene has played.

Scarred Hearts is available to view for free until Sunday, December 17th, as courtesy of the ArteKino Festival – just click here in order to accede directly to their website.

ArteKino and Festival Scope have a prezzie for you: 10 European films that you can watch from the comfort of your lounge anywhere in the old continent for free; but HURRY UP, you have to do it before December 17th [Read More...]