"Greasy movie"
What goes around comes around! Serbian filmmaker uses the real story of Serbian soldier who saved Muslim shop owner during Bosnian War in order to reflect on contemporary social-political issues not restricted to the Balkans - watch it now on VoD

Though released in 2013, Circles feels all the more relevant in a society so intoxicated with racial and religious hate, also speaking to contemporary issues of migration. Partially set in Bosnia, 1993 during the genocide of Muslims and Bosnian Croats, Serbian director Srdan Golubovic uses the true story of Marko (Vuk Kostic), a Serbian soldier who witnessed and prevented the death of Haris (Leon Lucev), a Muslim shop owner, from being violently beaten up by the hands of three soldiers, including the brutish Todor (Boris Isakovic).

The beating of Haris has repercussions for all those involved and after an abrupt cut away from 1993, Circles then focuses its narrative 10 years after the Bosnia War has ended. Granted the title can allude towards the circles in which small communities, such as those depicted in the film, orientate in. Still, what it serves to emphasise is the shapes and impacts which are left behind by an act of heroism.

After presenting a Bosnia so consumed by racial hatred in 1993, Golubovic’s shift to a fairly contemporary Europe seething with socio-political issues feels very apt in the current moment. The consequences of Marko’s simple act still bears down upon Haris, Todor and Ranko (Aleksander Berek), Marko’s father. Though it is clear to see that the film’s intentions are to covering a wide variety of social situations and people. The narrative of Circles feels somewhat convoluted by Haris’ decision to shelter a wife and child in Germany from an abusive husband.

The beats which do work, such as Ranko’s decision to not employ a soldier’s son – the father who was present at Haris’ beating- and Nebojsa (Nebojsa Glogovac), Marko’s friend, who faces a dilemma whether or not to make a lifesaving surgery on Todor do however add a level of layered emotional complexities. Choosing to select those closest to Marko and pursuing them only could have been a creative decision undertaken that would have benefited the story. 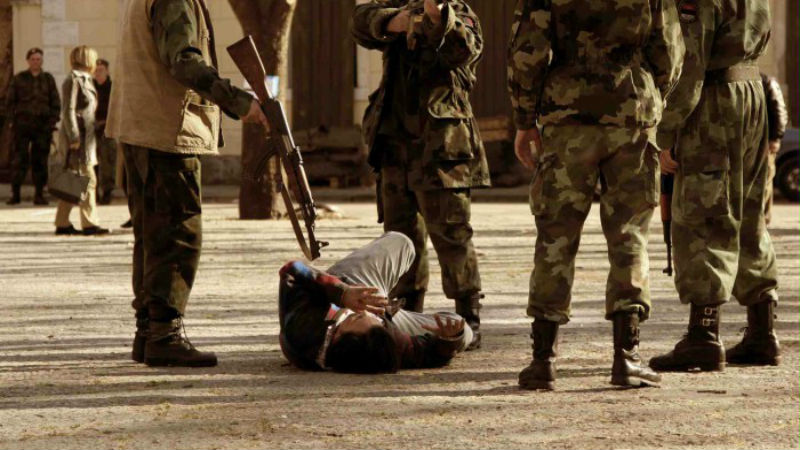 Supported by a plethora of performances, the film has a clear cinematic milieu in its wide lens, capturing the vast social housing and brutalist architecture. Similarly, the lens sits from a side on perspective in a handful of shots to elicit the isolated decision which Nebojsa in particular faces. Pouring out onto the screen, the clear melancholy of the country is presented in a subdued colour palette that feels akin to social realism, thus fitting the narrative. Specifically, in the apartment of Haris, beiges and grey colours fill the room, with the abusive husband hence entering in all black and throwing his families harmonious situation in chaos.

Bookended by the beating and its repercussions, the strength which the film demonstrates in withholding certain information until the final scene is subtle modern filmmaking. In understated political messages that do not inundate the audience, Circles holds an emotional and powerful core; one which shines a light on an act of kindness that defines an individual and communities’ life. It’s a welcome reminder that during moments of darkness, light can still shine through and break the void.

Circles is part of the Walk This Way collection, and it’s now available on all major VoD platforms.