"Greasy movie"
Doc about filmmaker Simon Fitzmaurice, who himself directed a movie while suffering from Motor Neuron Disease, will open your heart and fill the darkness with light! Just don't forget the tissues - now on VoD

The constant struggle between life and death has never been more clearly expressed than in Sigmund Freud’s concept of Eros and Thanatos in Beyond the Pleasure Principle in 1920. In his work, the famous psychologist stated that all life is dependent primarily upon ‘life or death instincts’. Over my academic studies, such a theory became paramount towards my scholarly essays et al.

Yet, away from theoretical thinking, the actual lived in experience of life is what truly matters. In the instance of Simon Fitzmaurice, a constant interaction with death occurs daily as he is wheelchair bound, stricken sadly with Motor Neuron Disease in 2008. Achieved through deeply personal footage shot by Simon himself over the course of his life thus far, It’s Not Yet Dark uses his original novel and extrapolates upon it in the best possible fashion; through film and Simon’s love of family and life. 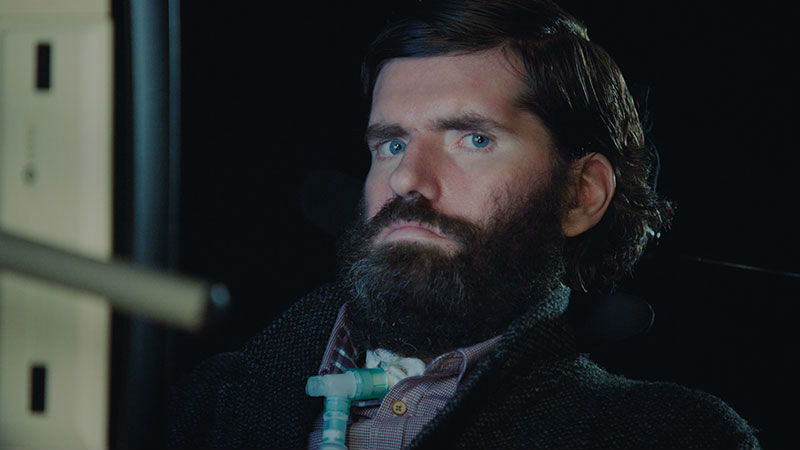 Starting out from humble beginnings in Dublin, it was clear from a young age that Simon was captivated by short fiction. Eventually graduating film school with a 1st Class Honours degree and a short film which took him to NYU’s Short Film Festival and later Sundance, the world was his oyster. Accompanied by a devote love for his partner, Ruth, his life consisted of spiritual and physical fulfilment. Just as things started getting good, the MND started out with a small limp in his leg and later developed into a full bodily paralysis, as we see Simon at the start of the film.

Director Frankie Felton chooses to initially present Simon as his current state is. Motionless but looking to camera with a brooding beard and pushed back hair, his face naturally gives no expression. As the documentary unfolds, the still image of Simon that is originally presented decays into a man glowing with happiness, as created by his wife, numerous children and family. 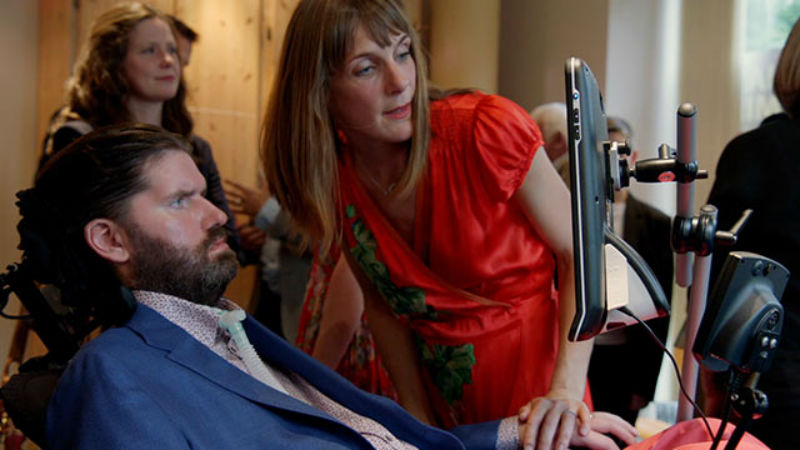 Accompanied by the voice-over narration of Colin Farrell, his story becomes bookend by his five years in the making of a film called A Girl Called Emily, which opened at a local Irish film festival last year. Though Farrell’s participation in the film maybe is viewed as a lucrative piece of star appeal, the actor’s relationship with Fitzmaurice runs deeper than simply narrating his life so far – he was a huge advocate for the fundraising needed to get A Girl Called Emily financed and made.

In life we all have struggles, still, it is the character to which we resiliently persevere that define us. In the instance of Simon Fitzmaurice, he is a shining example to us all that through thick and thin one must love, care and pursue their dreams to the utmost. Though a whole packet of tissues will inevitably be consumed, it’s pivotal to the person that Simon Fitzmaurice is, that those who view the film seek to achieve fulfilment in their lives. Simply carpe diem.

Sadly Simon passed away just a few weeks ago on October 26th due to complications related to MND. It’s Not Dark Yet is available in the UK on all major VoD platforms from November 13th. They include Apple, Google Play, Amazon and Microsoft.

This is one of those fine movies which fits in so incredibly well with our vision that cinema should be used as a tool for personal liberation.