It’s easy to argue that people with mental health conditions deserve a fulfilling existence, a happy relationship and even a sex life. But it’s far more difficult to demonstrate it in a convincing and realistic manner. Filmmakers Antonio Santini and Dan Sickles did just that, creating a very tender and touching doc about two people suffering from various mental health disorders, and who you wouldn’t normally expect to tie the knot.

Dina Buno is 49 years old, and she suffers from a “smorgasbord” of mental health conditions, as her mother puts it. She has profound psychological and physical scars from past relationship and she survived a shocking episode of domestic abuse (you will only find out the details in the end of the movie). She’s determined to marry her boyfriend Scott Levin, a Walmart door greeter who suffers from Asperger Syndrome (one of the conditions she also has). She wants to start afresh, despite her painful past and her complex medical issues. 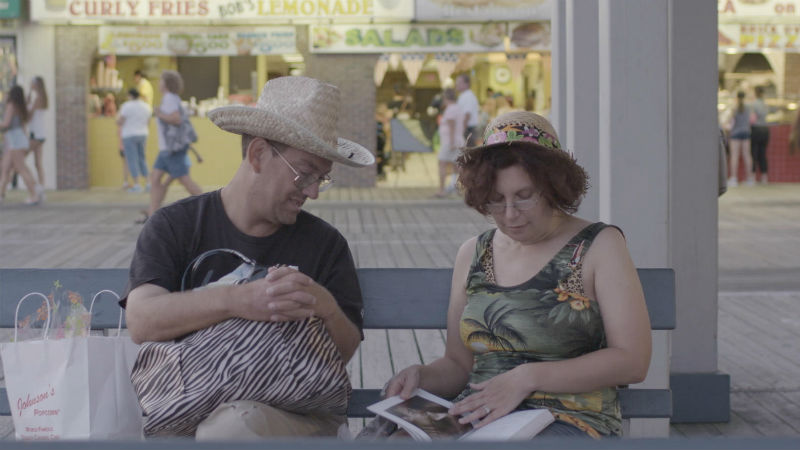 What’s remarkable about Dina is that it doesn’t focus on Dina and Scott’s limitations and problems. Instead, this doc fully enables them. Dina and Scott are not human beings despite their mental health conditions. And they are not defined by their limitations, either. They are just two loving people, and we have every reason to believe that their relationship is feasible and profound enough to survive. There’s an enormous amount of tenderness in a little peck on the lips, in an insightful conversation about sexual fetishes and in a walk on the beach looking at the sunshine and listening to the seagulls squawk. There’s a sense of urgency in their candidness and simplicity.

Documentaries such as Dina, LoveTrue (Alma Har’el) and Quest (Jonathan Olshefsky), all three made this year and distributed by Dogwoof, provide us opportunity to look at the unconventional and marginalised American family in a way very different to reality shows on television. These films are far more sensitive and less manipulative. Dina even has a touch of cinéma vérité, or a home video feel – except that the audio is impeccable. The camera gets very intimate without being invasive.

We live in such a busy world, and we rarely take the time to meet real people, to talk to the eccentric couple living next door, to look them in the eyes and even join their wedding. Films like Dina offer you the chance to do so. It is out in cinemas across the UK from Friday, October 20th.