"Mostly clean movie"
Not a walk in the park: four young men mourning the tragic death of a friend go on a hiking trip in Swedish woods, but what they encounter is far from comforting - on Shudder on March 7th; also available on other platforms

What’s the best way to honour the memory of a dead friend? Take a hiking trip deep into the dark and creepy woods of Sweden! This is more of less how four old college friends from Britain decide to reminisce and to commemorate their mate, who was the fatal victim of an extremely violent assault in an an off-licence somewhere in London (pictured below).

Luke (Rafe Spall), Hutch (Robert James-Collier), Phil (Arsher Ali) and Dom (Sam Troughton) make a clumsy and cumbersome foursome. They argue and quarrel constantly during a trip. Luke feels guilty because he did not help his late friend while he was being attacked, and Dom is never hesitant to point out his friend’s failure. The friends soon begin to collapse both physically and emotionally, and they become too tired to return to civilisation on the same day. They take refuge overnight inside a mysterious and apparently abandoned hut, and that’s when it all begins to go awry. 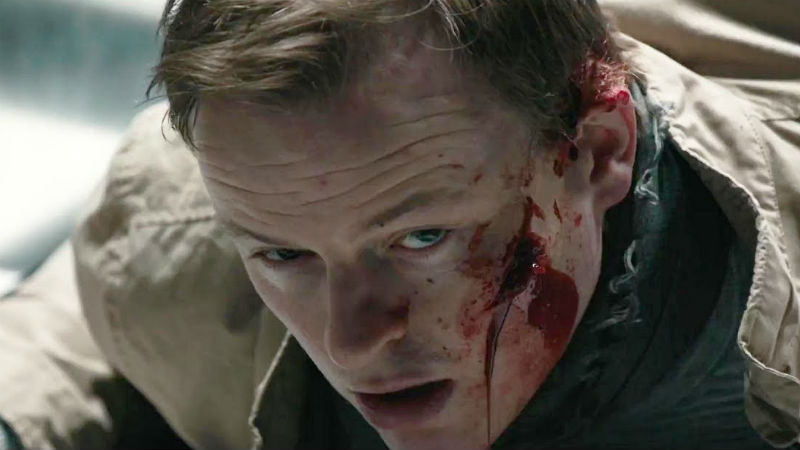 Blending element from The Blair Witch Project (Eduardo Sánchez, Daniel Myrick, 1999) and The Hill Have Eyes (Wes Craven, 1977) in the first half, The Ritual suddenly turns into a completely different beast in the second part. I can’t say too much without spoiling it. All you need to know is that elements of alleged Scandinavian superstition are suddenly thrown in, as well as a device which you might recognise from the emblematic British horror Wicker Man (Robin Hardy, 1973).

The visuals deserve a special mention: the CGI creations at the very end of the movie are quite fascinating. Plus there are some good scares. The problem is that the plot becomes too ambitious and eventually goes entirely off-rail. I think it tries to convey some message of failed camaraderie, but I’m not entirely sure what it’s trying to say. The bits and bobs just don’t gel together at the end. In a nutshell: not a terrible film at all, but the “huh?” feeling might linger with you as you walk out of the cinema.

The Ritual is out in cinemas across the UK on Friday, the 13th. On Netflix in March 2o20. On Shudder on Monday, March 7th (2022). Also available on other platforms.