"Dirty gem"
Because the heart never stops beating: French movie is an energetic and yet painful reminder of the Aids crisis of the 1980s/1990s and the activism that it triggered - now finally available on Netflix

Looking back at history can be extremely painful, in both a physical and metaphorical sense. Robin Campillo’s 120 Beats per Minute takes a a look at the activists from Act Up in the Paris of the late 1980s/early 1990s, the pinnacle of the Aids crisis. The movie blends passion and resilience with the raw and bleak reality of those infected with HIV, at a time when the disease was almost synonymous with a death sentence.

Act Up (Aids Coalition to Unleash Power) is an international direct action advocacy group promoting awareness of the Aids pandemic, as well as fighting for legislation, medical research and treatment for those infected. The group originated in the US, and it was notoriously active in France – the country had more than twice the number of infections as Germany and the UK (according to the movie). “Direct action” and “fighting” are not euphemisms. These young and energetic activists engaged in extreme activism, including invading a pharma labs and bombarding it with fake blood, handcuffing an executive on stage during a major event, and guerrilla-lecturing schools about safe sex while also handing out condoms to underage boys and girls. The film wraps up with what’s probably the most radical and symbolic militant act that I can think of, but obviously I’m not going to spoil this for you. 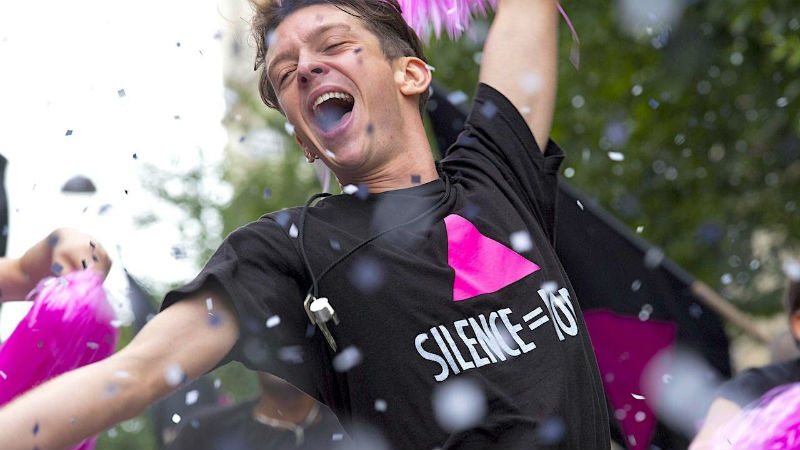 The ensemble cast is composed of a closely-knit group of young activists who meet up regularly in order to discuss the next actions. They are very supportive of each other and also extremely organised. They don’t clap in their meetings so that they don’t interrupt the speaker. Instead they snap their fingers in order to express approval of what’s being said. Their mottoes are remarkable. They range from the silly “I am Aids, you are Aids, we are Aids” to the shocking “When I grow up I’m going to be HIV positive”, stamped on a placard alongside the picture of a child. They are fiery and volatile, prone to emotional outbursts – which is quite understandable given their horrific predicament. Yet their stamina and determination stand above everything else. They are truly inspiring. Their heart is beating against all odds, in very good French style of self-determination – as in the last sequence of Marcel Carné’s Les Visiteurs du Soir (1942). The difference is that in Carné film the heart continues to beat despise the Nazi occupation. Here the heart continues to beat despite the HIV virus and the prejudice attached.

Campillo’s film manages to highlight the ambiguity of the agenda of the pharma labs. They never release interim results, and it’s unclear why they refuse to do so. Are they vouching for the quality of medical research or it it entirely about their commercial interests: The film also examines the agenda of insurers, which is far less ambiguous: “they want us dead”, claims Act Up. 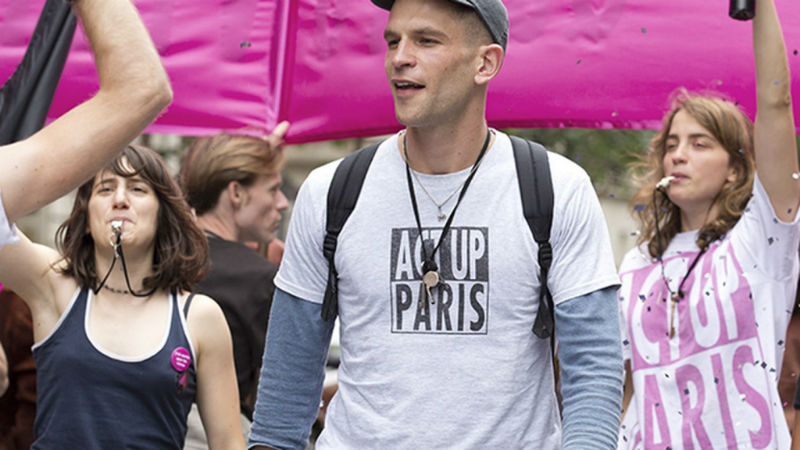 Finally, the movie highlights the double-edged reverberations of radical activism. On one hand, they do a wonderful job in raising awareness of the Aids crisis and the plight of the infected. On the other hand, they also increase publicity for the retroviral drugs AZT and DDI, and this could cause their prices to soar, one of the activists deftly notes. Another problem is the apathy of the hedonistic gay scene, who are very reluctant to engage in the fight out of fear of stigmatisation. These young people have to fight on several fronts at the same time, and their predicament is an uphill struggle.

Some critics have condemned the film for being untimely. I beg to differ. Act Up is still active, and while HIV has been demoted from fatal to chronic disease, the struggle goes on. 120 Beats per Minute is both a meditation and a historical register of our lack of preparedness to deal with a new epidemic, and to reconcile personal, political and medical interests. Other epidemics will eventually come and we need to be able to fight them.

I have sung the praises of the film so loudly, so you might be asking why I haven given it our maximum rating: five dirty splats. 120 Beats per Minute has one shortcoming: its duration. At nearly two hours and a half, the film feels too long, and the narrative doesn’t sustain itself throughout. It should have been at least 30 minutes shorter. That’s 3,600 heartbeats.

The gay Ballad of Narayama? Gay Americans living with HIV move to the desert as they get older, where they calmly wait for their deaths, seek spiritual healing and community support [Read More...]