"Filthy genius movie"
Akin to the unicorn referenced in the 1982 movie, the new Blade Runner is truly a rare breed of a film; it is original without destroying any of the achievements of its predecessor - in cinemas everywhere!

Science fiction hasn’t always been dystopia fiction wrapped with moral ambiguity. After the impact of Ridley Scott’s Blade Runner (1982), combined with the art house aesthetics of Tarkovsky’s Stalker (1979) the future was never the idealistic alluring it once was, now there was only sadness and decay. Following in the style of Scott, Denis Villeneuve brings an astute eye to the paradoxically beautiful yet unforgiving futuristic Los Angeles. Working in the same genre as Arrival, that film’s vast scope for sci-fi proved only the surface to its non-linear narrative and emotive core. Villeneuve’s next step was always going to be interesting, but nobody expected it to be Blade Runner 2049.

Adopting the 30 years later template of Star Wars etc, Villeneuve’s work takes place in the exact same space as the original, only humanity has driven itself into a deeper state of pollution and overpopulation. Not only are have the replicants been modified to be the perfect foot soldiers of the human race, the subsequent years have seen an electro-magnetic pulse blackout, worm farms installed as protein alternatives and the rise of The Wallace Corporation, replacing Tyrell as masters of AI manufacturing. 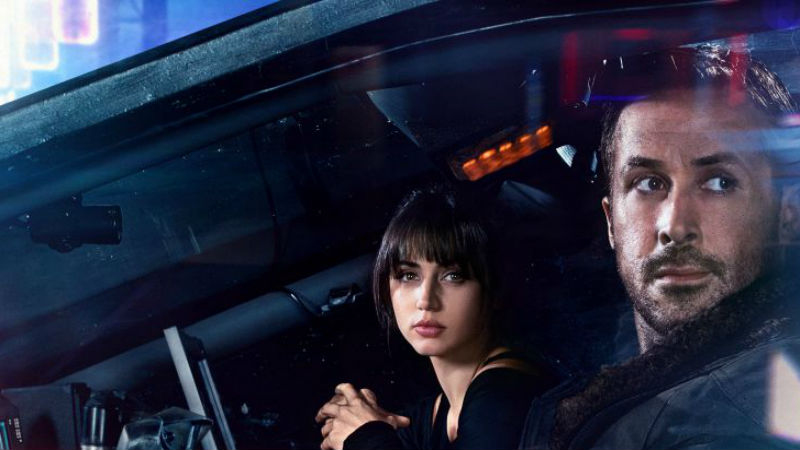 Evolving technologies of holograms, humanity has created a climate that leaves little room for actual human interaction. Granted these themes have been discussed numerous times in poignant films like Ex Machina (Alex Garland, 2014) and Her (Spike Jonze, same year) Blade Runner 2049 somehow manages to find new room in which to illustrate and debate this topical debate – visually and narratively. The logic behind this evolution in human technology and interaction is highly plausible, giving emotional gravitas to K and the relationship he holds with his sex hologram, Joi (Ana de Armas). Commoditised and marketed as the ultimate female pleasure across the city in gigantic neo size, Armas’ beauty is reminiscent of Sean Young’s Rachel.

Part of Wallace’s replicant army is K (Ryan Gosling) works for the LAPD as a blade runner. Unlike Deckard before him, it is made crystal clear from the opening moments that K is not human. The clarity that instantly introducing this character as a replicant frees the film up, leaving the is-he-or-is-he-not debate of Deckard and Blade Runner trailing behind. After an opening encounter with an older replicant model named Sapper Morton (David Bautista), K must track down a further target, leading him to a discover the chiselled Deckard (Harrison Ford). Like the great films of Hitchcock, so much of the film’s plot lies in mystery.

The small-scale models of the original are works of art, helping to create some of the most vivid science fiction world-building from figures the size of a thumbnail. Still, with Rogen Deakins as DoP, Villeneuve imbues a grander scale, with help from Dennis Gassner’s production design. Amalgamating with the sounds of Zimmer and Benjamin Wallfisch, sight and sound form together intrinsically, demonstrating cinema’s visual excellence, in ways that cannot be achieved in other arts. 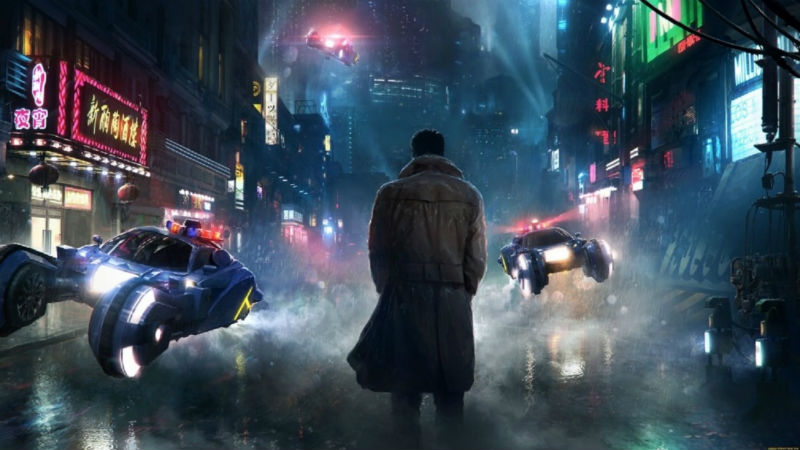 Adopting harsher synth than Vangelis’ score, the diegetic and non-diegetic sounds of dystopian Los Angeles could be found in any ominous Berlin-based nightclub such as Berghain. As in Sicario (Denis Villeneuve, 2015), Deakins’ uses the natural darkness of the frame to illicit chiaroscuro, creating some of the most powerful vistas of 2017.

An extension of the numerous self-assured protagonists he has portrayed over decades, it’s in this performance as Deckard that Harrison Ford gives one his finest, most tender portrayals. Eliciting melancholy in a form some, including myself, thought we would never be seen from Ford again, his Deckard feels tactile and nuanced without feeling overplayed.

Akin to the unicorn referenced in Blade Runner, Blade Runner 2049 is truly a rare breed of a film; it is original without destroying any of the achievements of its predecessor. Villeneuve crafts a true modern blockbuster that will survive in an era of formulaic superhero flicks. Flourishing with a glimmering moment of emotion, Villeneuve closes with an emotive core – comparable to Arrival. As the screen turned to black, I was thankful to emote overwhelming sensations of joy and sadness. Pinching myself, I was reminded of my humanity – this cannot be said of those replicants, who have seen so many things, such as starships burning off the shoulder of Orion…

Blade Runner 2049 is out in cinemas across the UK and the world right now.