Carmen on the Lake

"Greasy movie"
Latin passion with Germanic flavours: Bizet's majestic opera at Lake Constance has been captured in film, so you don't need to travel to Austria in order to witness this elegant spectacle - in cinemas across the UK

Opening with a cinematic prelude to previous famous operas held at Lake Constance in Bregenz (Austria), Carmen on the Lake works within the category of some of the most spectacular operas to grace planet Earth. Still, for the first time in cinemas, this sensational piece of art can be basked in on the big screen with visuals and audio to fill anyone with delight. Captured live from the Bregenz Festival in July.

Based on the novella by Prosper Mérimée, Carmen follows the story of the eponymous character, a young gypsy girl in 19th century Seville whose love proves too destructive towards a young soldier, Jose. Although initially a ploy to help her travellers bring in a contraband. When his infatuation leads him to kill a fellow guardsman in order to prevent her arrest, he becomes a wanted fugitive. Carmen resents his possessiveness and leaves him for a famous bullfighter in Seville. 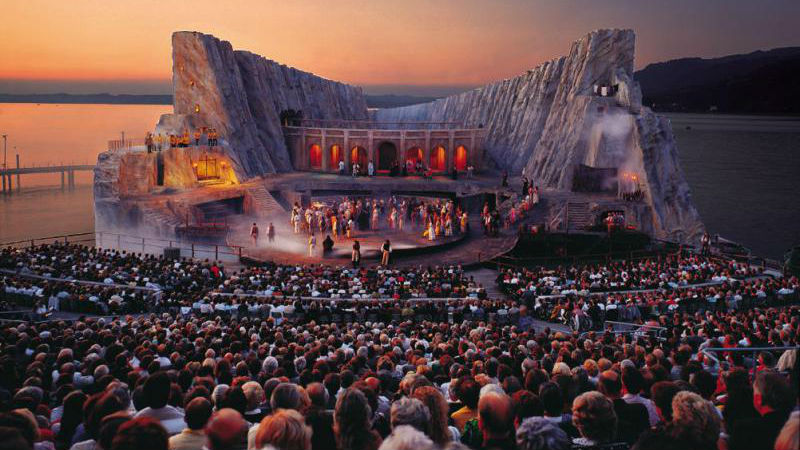 Obsessed and frustrated, a distraught Don Jose follows her to the bullring with tragic consequences. Though necessary narrative waffle, the true star of the show is production designer Es Devlin – who works across film, theatre and music. Recently designing sets for the likes of Kanye West and Beyoncé illustrates her stature in the industry. However, taking four years to create, the stage is an Alice in Wonderland esque layout with floating cards caught between two gigantic hands.

Initially, Act I is filled with natural light and the sexual tensions between both male and female factions in Sevilla. As the plot literally thickens from lust to death and violence, the natural surroundings succumb to the darkness and all that is left is the glorious stage. This transition from light to dark is captured evidently through the use of extreme long shots. The spectacle of the sun setting behind the man-made objects creates a visceral experience that some fictional filmmakers struggle to ever produce. The themes of man versus nature reflect the constant battle between Carmen and Jose of Eros and Thanatos, or sex and death. The opera’s literal representations of its values et al shine bright in the cards of the stage; Carmen is the holder of such cards and hence playing those around her. 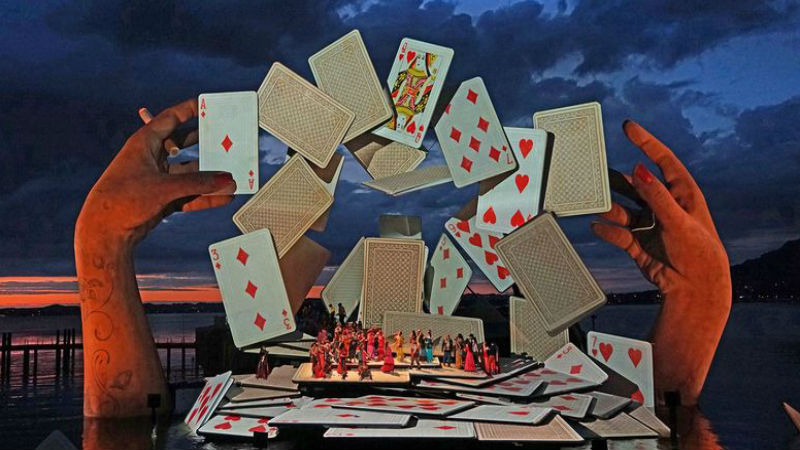 With the original libretto by Henri Meilhac and Ludovic Halévy, music director’s Paolo Carignani and Jordan de Souza do not change the brilliance of Habanera and Seguidilla and Escamillo‘s Toreador‘s Song. These melodies speak for themselves and to not alter them proves the right artistic direction.

Although I’m not an opera fan per se, Carmen on the Lake’s sheer spectacle cannot be ignored. At the root of the opera, the compelling tale of love and passion works in harmony with the visual aspects to engage an audience throughout every act. As a piece of film its cinematic qualities are clearly absent, however the live recording captures the beauty of Bregenz and the grandeur of the set and occasion.

Carmen on the Lake is out in UK cinemas on Thursday, September 14th.

How does a middle-aged and intellectual Austrian rodent gnaw his way through unemployment? With rage and an unwavering lust for revenge - live at Berlinale [Read More...]