"Mostly clean movie"
Dan Bush's hybrid of horror and bank heist stars James Franco; it does work on some levels, but it eventually loses the plot - on VoD on Friday, August 27th

One big star producing and starring in the movie? Tick. Two strong female protagonists? Tick. Innovative genre device? Tick. Major twist at the end? Tick. Predictable moral message? Tick. The Vault has all the ingredients of a highly formulaic 21st century horror. It will surprise and scare you, but it’s in no way a memorable film that will stay with you for a long time.

Estranged sisters Vee Dillon (Taryn Manning) and Leah Dillon (Francesca Eastwood) decide to rob a bank with the support of some accomplices. Later in the movie we realise that they are, in reality, kind-hearted people engaging in a crime for a very altruistic reason: in order to help their mother. Despite their good intentions, they fall prey to a vengeful entity inhabiting the bank’s vault. The institution saw a robbery-turned-massacre decades earlier, and the evil spirit of the dead criminal and his victims just refuse to budge. Will they now impose the same horrific fate on the two sisters and their associates? 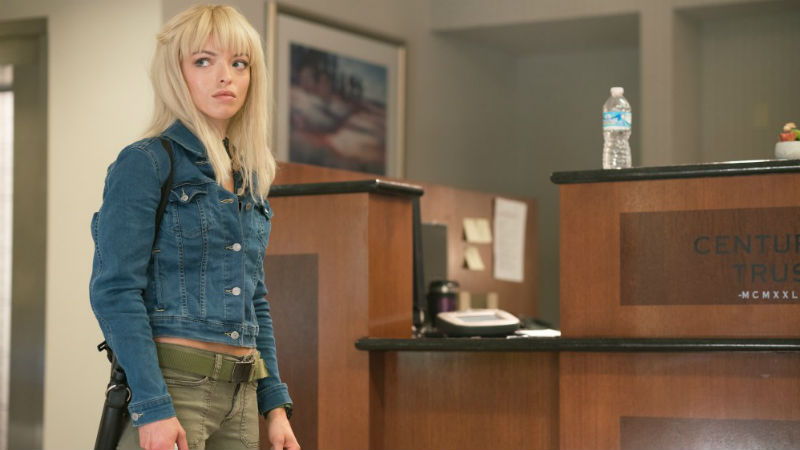 There are some very good jump scares in the movie, and some very disgusting gore. The problem is that the storyline becomes a bit hackneyed after a while, and the twist at the end is highly predictable from the moment James Franco’s character (the bank manager) first shows up in the movie. The very last scene is the biggest conceivable cliché of horror, and you might find it funny rather than scary.

This is uncompromising entertainment, still fun to watch. Eastwood is very good, particularly with wig on (pictured above): she deftly blends moral hesitation with criminal determination. Taryn Manning is also very convincing. The two sisters deliver a passionately dysfunctional duologue. And Franco is very sexy with his corporate moustache, in the skin of the ultra-good guy who will risk everything else for the security others.