"Filthy genius movie"
Despite the movie title, this flick starring Rooney Mara and Casey Affleck is not your average ghost film, but instead a slow-burning and provocative essay on the meaning of existence - on all major VoD platforms

A couple lives in a house. He dies and returns as a ghost (a person with a sheet over his head) she can’t see. She stays for a bit then moves out. Other people come and go. He stays, he waits.

Initially M (Rooney Mara) wants to move somewhere else, but C (Casey Affleck) rather likes the house and wants to stay. After his death, she identifies his body in the morgue then spends some time with his mortal remains. Later, his corpse gets up matter of factly, sheet and all, and leaves. To return to their house. Before moving out, she scribbles a note on a small piece of paper, folds it in to a tiny square and pushes it into a door frame. He tries repeatedly to extract this note to see what it says. We want to know, too. 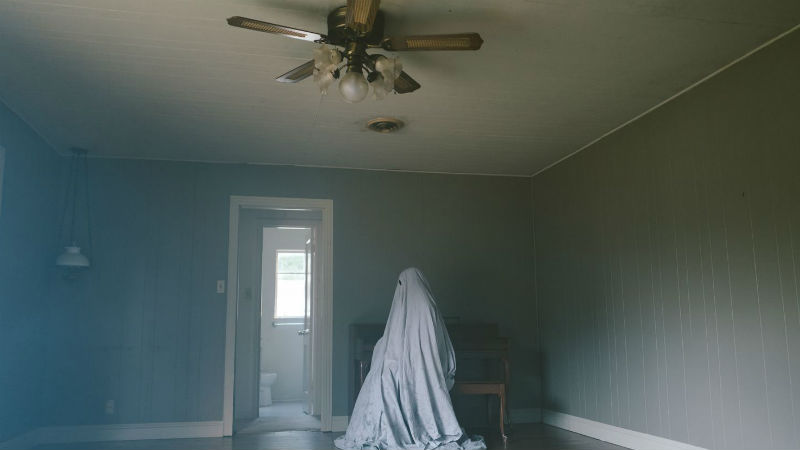 Time moves on but C doesn’t. He attempts to scare a resident mum and her children by hurling kitchen plates at them in an uncharacteristic loss of self-control. He listens to a man at a party pontificate on the meaning of life in terms of what we leave behind. He waves at the (person under a floral patterned sheet) ghost in the house next door. Eventually the houses are demolished and the site is built upon. He goes back in time to watch the settlers who built the first house.

Some very long takes include one of the bereaved M violently stuffing herself with a pie then throwing up. The 4:3 frame with rounded edges throughout recalls projected photographic slides and home movies of yesteryear. Odder still are the noises off which M and the pre-ghost C get out of bed to investigate although they can find nothing. We’re never quite sure what we’re doing in this house or why we’re watching this couple in their very private, home space. We might be some strange, unearthly presence. Such as a ghost. 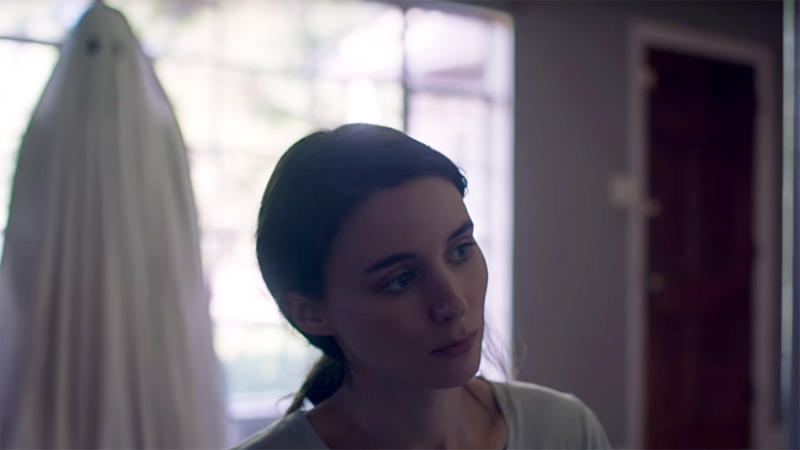 All of which is thoroughly compelling to experience or just to watch. As M drops out of the film, you’ll find yourself wondering what C’s ghost is still doing there, why hasn’t he just vanished at death or gone on to whatever place we go to when we die. If the film ponders such questions, it never attempts to impose easy answers. That lends it an incredible power.

C’s death is violent but we see only its peaceful aftermath. There is violence however in both their lives: M’s violent eating reflects C’s when we eventually see him eat in flashback. His violent outburst with the kitchen plates suggests something latent in his character but elsewhere he seems relaxed. The violence expresses a pent up frustration lurking beneath. What matters in life? What happens if it’s suddenly cut short? What exactly do we leave behind us?

A Ghost Story was out in cinemas in August 11th, when this piece was originally written. It’s out on all major VoD platforms in February 2018.

This very unusual French ghost movie is a kaleidoscope of genres, references and nationalities, hardly comparable to anything you've seen before [Read More...]

Demon-infested or moonstruck? Empathetic and non-intrusive doc gets under the skin of Italians 'possessed' by demons without passing judgment and breaking the dysfunctional characters - in cinemas [Read More...]