"Filthy genius movie"
As weird as it gets: documentary about the highly controversial avant-garde band Laibach's concert in extremely secretive North Korea offers unique insight into an extremely peculiar and explosive event - from DokuFest

Not very often you will come across a combination as dirty and explosive. Firstly, think of the Slovenian band Laibach, who have always loved controversy: their name is German for their country’s capital Ljubljana, a very unwelcome gesture in Tito’s Yugoslavia (where the act was formed back in 1980); plus they’ve constantly made provocative usage of Nazi symbols and so on. Now place such band in the most secretive and possibly most oppressive regime in the world: North Korea. What’s the outcome? Perhaps something very different from what you would expect.

Laibach and North Korea have something in common: they both claim that they are highly misjudged and misunderstood, and that most of the world does not grasp their real intentions. They are the alleged misfits of the political and of the music world, and so they decided to officialise a very bizarre marriage through a singular event: Laibach performed two concerts in August 2015 at Kim Won Gyun Musical Conservatory in Nampo-dong, Pyongyang, to coincide with the 70th anniversary of the end of Japanese colonial rule in Korea. This was a first time in history a foreign band performed on North Korean soil. While you may not agree with the good intentions of the heady European band and the obscure Asian country, few would challenge that they indeed perceive themselves as the misconceived underdogs just waiting for the right opportunity to shine. 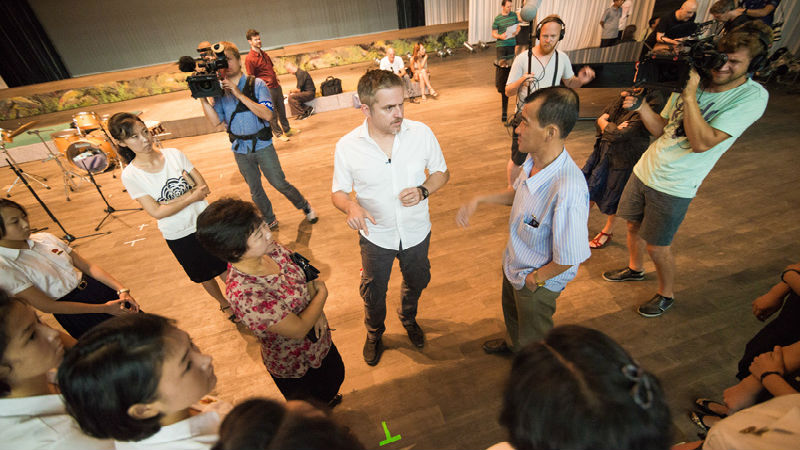 Directed by the Latvian filmmaker Uģis Olte and Norwegian Morten Traavik (who is also in front of the cameras most of the time acting as some sort of narrator, moderator and peace broker) and filmed in the days preceding the concerts, finally culminating in the event itself, Liberation Day couldn’t get any more bizarre. And yet it works extremely well. While not stated in the movie, it is obvious that the helmers could only film in locations picked by the strict regime, and I have little doubt that politicians also inspected the final footage in minute detail. Despite the censorship, the film offers an extremely interesting insight into the world’s most closed country.

Laibach also had to adapt their repertoire, and their setlist was absolutely dirtytlicious. They offered the perplexed crowd of North Koreans a medley of songs from The Sound of Music (Robert Wise, 1965), a movie very well known in the country. Of course this isn’t your jolly and gay Julie Andrews rendition, but instead a performance infested with heavy drumming, industrial flavours and a deep voice singing in German – very much the antithesis of the original musical. There are also bits of Opus’s Live is Life and We Will Go to Mount Paektu (a song in praise of Kim Jong-un) mashed into the whole ordeal. 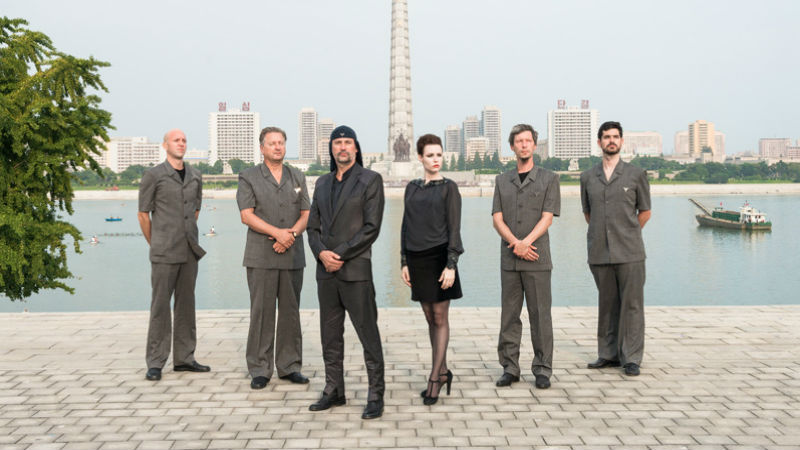 The imagery within the movie is beautifully constructed, with elements of Soviet/ North Korean propaganda iconography blended with the idyllic hills of Austria (from the 1965 movie). And the performance at the end is priceless in both its campness and awkwardness. Think of the most bizarre act you’ve ever seen on Eurovision, and you’re not even halfway there.

From a moral perspective, is the making of such film questionable? Yes. Did the directors and the band collaborative with an oppressive regime which willfully conceals extreme poverty from the rest of the world? Yes. On the other hand, this is also a subversion of a regime which does not embrace change, a challenge of censorship and a singular opportunity for two very different worlds to establish to communicate channel, however limited it may be.

There is an unintentional reminder of the oppressive ways of the North Korean regime in the film. The American student Otto Warmbier, who was arrested in North Korea for a stealing a propaganda poster from his hotel room, is shortly featured in the movie. He died in April this year (after Liberation Day was already finished), shortly after being returned to the US. The reason of his death is likely related to mishandling while at prison and forced labour camps.

Liberation Day is showing this week at DokuFest, one of the largest documentary film festivals in Europe, which is taking place in Kosovo right now. The location of the screening isn’t insignificant at all: Kosovo and Slovenia were both part of Yugoslavia when Laibach was created 37 years ago!