"Filthy genius movie"
Dunkirk is a film miracle: read Jeremy Clarke's verdict of what he describes as "the likely film of the year" and a gauge of "British conformism, value judgments and prejudice" - on Amazon Prime on Thursday, April 1st

British filmmaker Christopher Nolan – now one of the highest-grossing film directors in history, with the Dark Knight Trilogy under his belt – has created a complex and multilayered film that cleverly interweaves three separate narrative strands: 1) on land over a week a young soldier (Fionn Whitehead) after he arrives alone at Dunkirk beach and falls in with others (including the music superstar and heartthrob Harry Styles); 2) on sea over a day a small, requisitioned, civilian boat (crew: three) go to bring home trapped combatants; and 3) in the air over an hour three Spitfires fly a sortie. Nolan is fascinated by time and runs these in parallel so that an incident partly revealed in one strand is later retold in another revealing more. There’s a constant sense of the clock ticking differently in the three time frames: mind-bending and exhilarating stuff.

The impressive analogue 70mm IMAX version puts you in there as if you’re escaping death on the way to the beach or in a Spitfire cockpit shooting at/being shot at by the enemy. It has everything you expect from a big screen war movie that small scale drama Churchill lacks. It’s a remarkable insight into the dirty side of being part of a war. The issue is survival: if not everyone can be rescued, who will be? The top brass organising the operation led by Kenneth Branagh must confront this issue to transport the maximum number of men home. 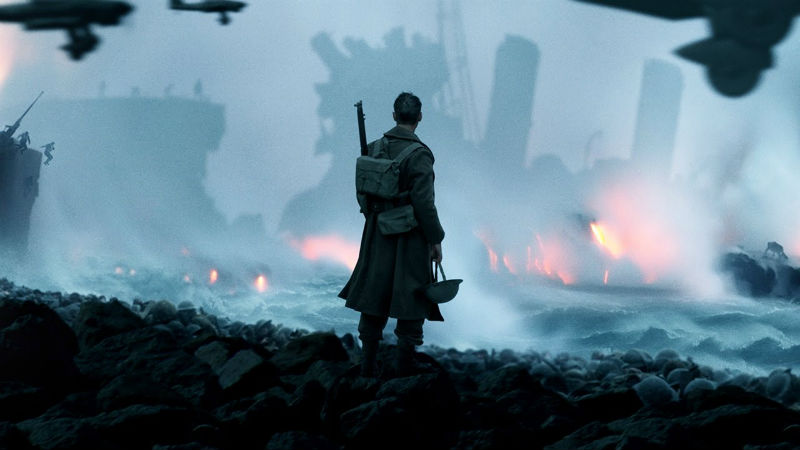 For those who are not familiar the events, the film depicts the Dunkirk evacuation of Allied soldiers from the eponymous beaches and harbour of France, between May 26th and June 4th 1940. It is believed that the extremely risky and unexpectedly successful operation saved the 330,000 British, French, Belgian, and Canadian troops from almost certain death under the surrounding German Army. Hence the “Miracle at Dunkirk” accolade.

As in the best horror films, anyone can die at any time. Not that this is a horror film. English soldiers are gunned down by French friendly fire. Spitfire pilot Tom Hardy’s broken fuel gauge makes him reliant on the pilot in the next plane relaying how much fuel that plane has left. Civilian boat captain Mark Rylance sails into a war zone with no weaponry or means of defence so he can rescue combatants. Shell shocked soldier Cillian Murphy completely loses it and injures someone trying to help him.

Men trapped in a beached boat are fired on from outside the hull by unseen assailants. People are trapped in spaces large or small which water threatens to fill cutting off their air supply. Swimmers covered wholly or partially in oil from crashed aircraft are forced to choose between staying underwater and not breathing and coming up to breathe when an inferno rages above the surface. Life and death situations. 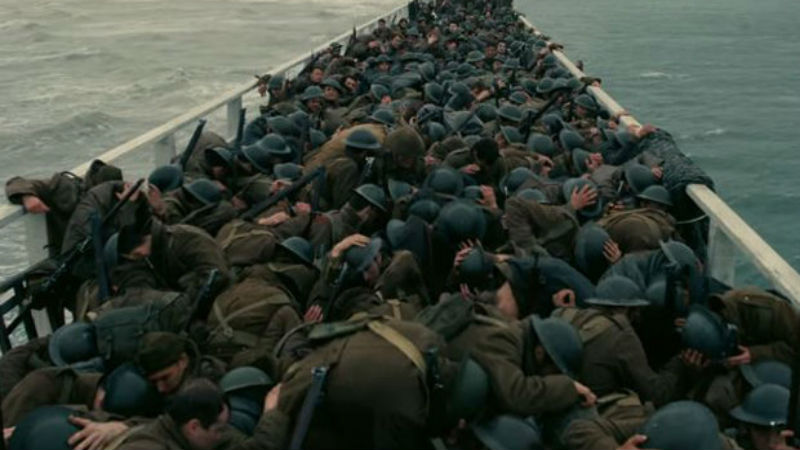 Nolan manages some worrying tilts at British society circa 1940 which resonate today. A young soldier reaches the beach and joins a queue to be told to go elsewhere as this line is reserved exclusively for the Grenadiers. Another soldier who doesn’t speak much is accused by others of being a German spy. And an airman who nearly drowned in action is asked by an embittered evacuee, “where were you when we needed you?” British conformism, value judgments and prejudice are alive and well in the fight for survival. But so too are heroism and being prepared to give one’s life in the fight for a better world. Britain, now as then, is both good and bad.

Dunkirk, however, is consistently good. In fact, it’s likely the most impressive film you’ll see this year. It’s out in the UK on Friday, July 21st (2017). See the analogue 70mm IMAX version at BFI Waterloo London, The Science Museum London or Vue Printworks Manchester if you can.

On Amazon Prime on Thursday, April 1st (2021). Also available on other platforms.

And click here for our review of another British historical film set around the same time, and still out in some UK cinemas.