"Mostly clean movie"
Take a walk on the wild countryside: travel almost 1,000 years back in time and join Edith the Fair in her pilgrimage towards the body of her husband tragically killed in the Battle of Hastings - Andrew Kotting's latest film is out in selected cinemas

Sometimes a medieval love story, sometimes a historical reconstruction, Andrew Kötting’s new film, like its protagonist, meanders about. Edith Walks is a tribute to Edith Swan Neck (or Edith the Fair), “handfast” wife of King Harold II. She became a fixture of English folklore because she traveled 108 miles on foot from Waltham Abbey to St Leonard’s-on-Sea in order to meet her husband’s body, who was killed during the Battle of Hastings – a journey which the film attempts to recreate.

To be honest, she does walk. Despite being dead for almost a millennium, she also speaks. Unfortunately, despite the filmmakers’ best intentions, she neither goes far nor says words of profound wisdom. Instead, our trip into a emblematic historical event becomes, unlike the real Edith, a bit aimless.

The film borrows much from the oral history format, based on interviews with those familiar Edith’s story. The English writer Alan Moore is one of the most knowledgeable interviewees, and he talks at length about her journey. The project’s insistence on serendipity, however, doesn’t spawn exciting scenes, unlike masterpieces such as Visages Villages (Agnès Varda, 2017). Varda’s film made full use of the characters found along the way in order to touch the viewer. Here, it just feels like we’re eavesdropping. 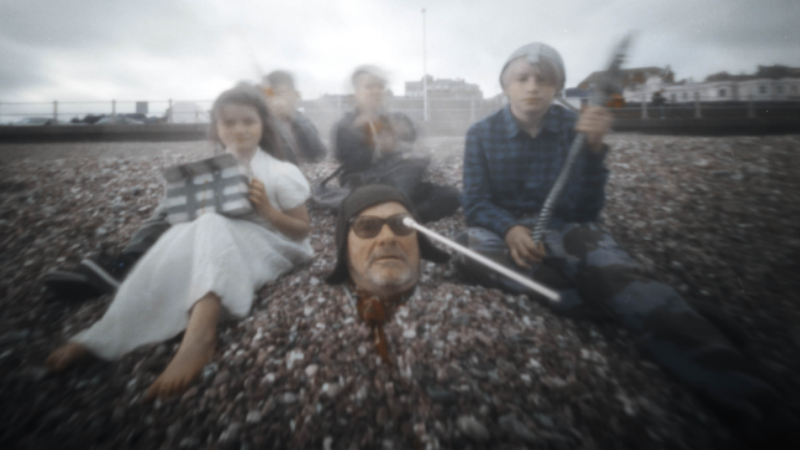 Claudia Barton functions well as the protagonist Edith, always fully-clad in medieval attire. She refers to the real Edith in the third person, thereby stripping the historical figure of a voice. While willfully done, this comes across somewhat clumsy. Nevertheless, Barton manages to sing a few medieval ballads to keep thing going.

The poor quality of the images doesn’t help either. Many scenes are so distorted that we can only see blobs vaguely resembling human beings. This is Kötting’s style though, and fans of no-budget and highly experimental cinema may be pleased with this. Others, however, may find that such aesthetics render the film a little amateurish, almost video art or home video feel. At a frugal duration of just 61 minutes, Edith Walks never feels like a conventional feature film.

In a given moment, death is defined as “just your length in time”. That notion implies that the dead and the living are forever intertwined and affecting each other. It’s a fine concept and very much present in art, as we keep seeing works that reference deceased individuals. Unfortunately Edith Walks got a bit lost midway while hurtling towards a more in-depth philosophical analysis.

Edith Walks is showing in selected cinemas across the UK from Friday, June 23rd.