"Greasy movie"
Nail-biting Irish horror about a ghost haunting a woman recovering from an accident in a hospital will make you want to jump from your seat... but what if your body refuses to budge? In cinemas this week

What if you wanted to scream but a machine prevented you from doing so? Dana (Shauna Macdonald) is paralysed on a hospital bed connected to a respirator, following a very tragic hit-and-run car accident. She can only communicate through a computer-synthesised voice (more or less à la Stephen Hawking, minus the metallic tones) generated by words she types on a keyboard. There’s a ghost haunting Dana, but no one believes it. Her doctors and family instead think that she is going insane. She is voiceless, both in the literal and the connotative sense of the word.

The first feature by the Irish filmmaker Dennis Bartok has all the ingredients of a good and conventional horror movie: a vulnerable victim who no one takes seriously, a sense of entrapment (on a bed in this case), empty corridors, plenty of blood and so on. The story development is also quite conventional: those who doubted Dana will inevitably pay a very high price. 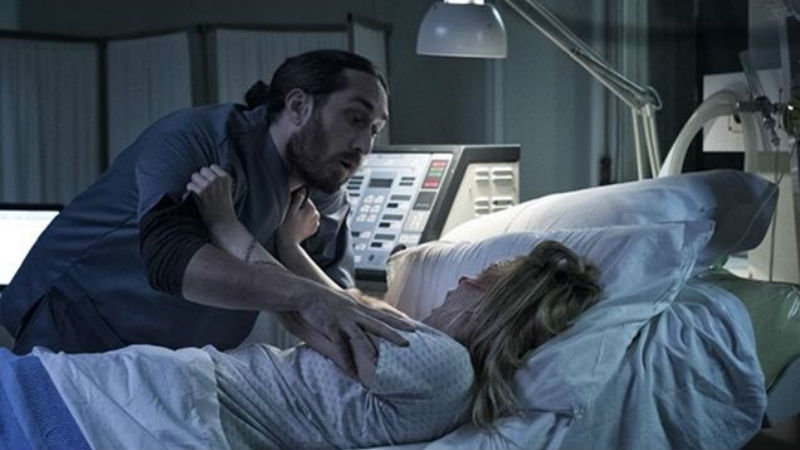 The outcome is very effective: the suspenseful pace holds the film together throughout, and the jump scares and gruesome images progressively build up to great results. The director deftly makes use of various media (CCTV, computer cameras, etc), also a very common horror device nowadays. Some images from the film will likely materialise in front of you once you close your eyes, which is more or less what a horror movie is intended to do.

But Nails isn’t a perfect movie. The first problem is that the climax at the end of the movie has too many loose ends, and many of the narrative threads (such as infanticide and a visit to the hospital during Dana’s childhood) never weave together even into a vaguely coherent plot. And while Shauna Macdonald is very good, some of supporting actors are a bit iffy: sometimes it feels like they are a little late delivering their lines.

Nails is out in cinemas across the UK and Ireland on Friday, June 16th.

Click here for our review of A Dark Song (Liam Gavin), another Irish horror out this year and worth watching out for.