The first feature film by Polish filmmaker Rafael Kapelinski tells the story of a group of friends -Jake, Kyle and Jarred – who always hang out together and whose conversations almost inevitably centre on girls, sex, and pornography. And they always go to a club that is run by an odd guy called Shrek. The movie takes place in London.

Jake who is the most interesting and complex character within the film. He is quiet and sensitive, and still a virgin. Butterfly Kisses introduces the subject of peer pressure with a gripping hand: the teenager must lose his virginity at any cost. The movie depicts Jake’s journey towards self-discovery in a delicate and realistic way, and this path will reveal some disturbing secrets.

Jake apparently has a crush on his neighbor Zara, whose room he always spies from the top floor of his apartment.  The two get closer, but in the end Jake is hopeless. As the film goes on, the clues from the beginning of the story confirm the horrible truth: Jake has paedophilic tendencies. Butterfly Kisses touches gently on the inflammatory taboo subject, but then it moves away in a different direction. 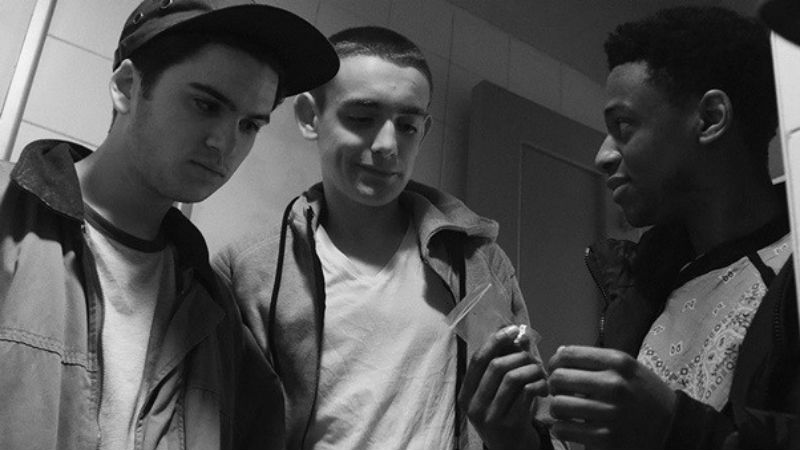 Kapelinski’s sense of direction is remarkable: he uses the horse as an allegory that drives the story plus in the end it appears as an intermittent vision. Still, the movie is not perfect. There are also weaknesses. The story is not totally fluent and fluid and sometimes it ends up being slow and not convincing enough. Some of the characters are a bit contrived: for example, Zara can be perceived as the victim, but she is also merciless with Jake. Some of the protagonists are full of inconsistencies and do not grab out attention.

The cast delivers great performances. Humans’ Theo Stevenson is spot-on in the interpretation of Jake and Liam Whiting; Rosie Day and Byron Lyons are great counterparts. The shining star is the Thomas Turgoose whose presence adds a certain je ne sais pas quoi to the movie. Nick Cooke’s monochrome cinematography is adequate and coherent to this bleak narrative.

Butterfly Kisses may not enrapture you with its narrative, maybe because the characters aren’t entirely relatable. On the other hand, it will entertain you while still touching on complex and potentially incendiary topics. The movie will show in London as part of the East End Film Festival, which will take place throughout June.