No family drama is too simple. There is a sense of tragedy in every fall out, and yet there is hope in every small gesture. Your good fortune lies in the trivial actions, the banal discussions, the petty events and the unexpected minor twists. After the Storm investigates the professional collapse of Ryota (Hiroshi Abe), and the consequences for his immediate family, as well as his attempts to make up for his shortcomings. The Japanese director Koreeda is best-known for the films Nobody Knows (2004) and Still Walking (2008).

Ryota used to be a prize-winning author, but his success has now faded away, and he now makes money as a second-class detective blackmailing some of his victims (such as unfaithful wives), and he also has to placate a gambling addiction. He can hardly pay for child support for his son Shingo. He often visits his avuncular, aging and still very active mother Yoshiko (Kirin Kiki) following his father’s death, and he suspects that his sister is trying to sponge her off. He is sheltered in his old lady’s house with his ex-wife Kyoko (Yoko Maki) and their son as a typhoon hits town, and he takes the opportunity to try to make amends with them.

The movie is populated with glib yet strangely amusing pearls of popular wisdom, particularly coming from Yoshiko. She explains that “the longer the man sits, the more the flavours set in”, in an indirect reference to the fact her son is also growing old. She also notes that more friends at her age just means “more funerals”. Such comments combined with simple yet very intense dialogues render the film very universal and relatable. There’s beauty in the technical frugality, realistic precision and urgent simplicity of narrative.

Another one of the film highlights is an extremely unusual and visceral link between mother and son kept inside a box. 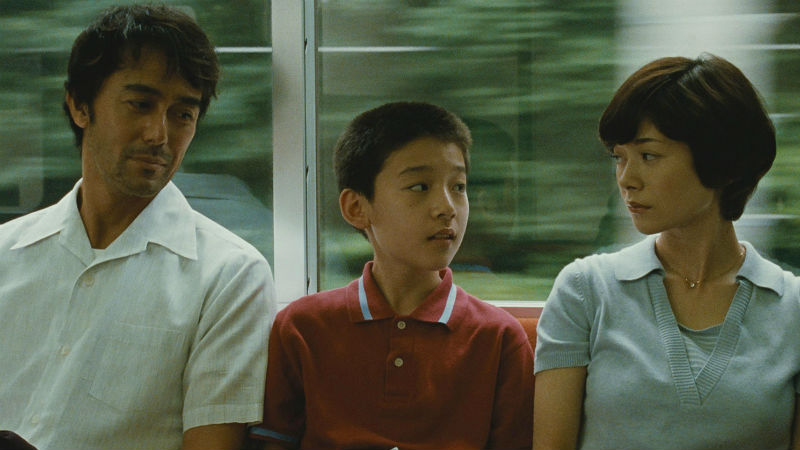 It’s not coincidence that the most important events in the movie take place during a typhoon. The violent natural phenomenon is a wake-up call, and it forces Ryota inside the safest of all places: his tiny mother’s flat, the equivalent to the maternal womb. In fact her dwelling is so small you have to move away from the table in order to open the fridge and the bathtub (pictured at the top) is about the size of a sink (in fact it’s a Japanese ofuro).

The attempt to reconnect with a different generation plus the location of the film in Tokyo will inevitably generate comparisons to Ozu’s 1953 classic Tokyo Story, possibly the most successful Japanese film ever made. The difference is that here it’s the son, not the parents, who is trying to rekindle the relationship, and the the elderly lady here seems very content in her predicament. It’s worth mentioning that After the Storm is a very personal film, written by Koreeda and filmed at the block where he grew up with his mother (not too different from what Tarkovsky did in Mirror in 1975).

In a way, the mundaneness of the movie is also an ironic commentary on the challenges that a former successfully writer such a Ryota has to face. His son grimaces at the definition of literary talent, thereby highlighting a challenge that any writer – including filmmakers – have to face: how do you constantly find freshness and originality in the trivial and banal? And this also one of the problems with After the Storm: it takes a long time before it enraptures you – with me it happened towards the last third of the 119-minute saga.

After the Storm was out in cinemas across the UK in June, when this piece was originally written. It was made available on BFI Player in the first week of October.

Tuning the pump organ: Japanese thriller in family drama clothing has a man’s old friend just released from prison teach a child how to play a music instrument, to devastating consequences - in cinemas this week [Read More...]

In this Corner of the World

A shock to the system: animation examines a young Japanese woman’s life in wartime up to and including the atomic bombing of Hiroshima - in cinemas this week [Read More...]