If you’ve hit a certain age, you may remember Edward Norton’s character in Fight Club (David Fincher, 1999) justifying a life of insomnia: “Everything is a copy of a copy of a copy”. Strictly speaking, Laura Nasmyth’s 8:30 isn’t about insomnia, but it does seem to come from that same state of mind. It’s as if the sleep disorder materialised right in front your very eyes.

This Austrian film follows the misadventures of a young sales agent (Florian Nolden) that travels to some unnamed suburban place and becomes trapped, in a surreal fashion, since the train he takes keeps bringing him back to the same godforsaken station. Madness ensues.

The funny thing (of which there are plenty) is that the sense of being trapped is established from the very beginning, way before we realise the protagonist’s fate. The framing that leaves the characters uncomfortable amidst the locations’ stern architecture belies their inadequacy, having to walk in these spaces not made for them, which looks like a cue straight from Roy Andersson’s playbook and also brings to mind Robin Collyer’s photographic work of street signs with no text.

We see the sales agent go on with his daily duties with three colleagues, with whom he never talks directly, only through wireless phones. They go about not actually managing to sell anything, being miserable in the most matter-of-fact fashion and even do an impromptu tribute to Reservoir Dogs (Quentin Tarantino, 1992). This is the collapse of 21st century youth. 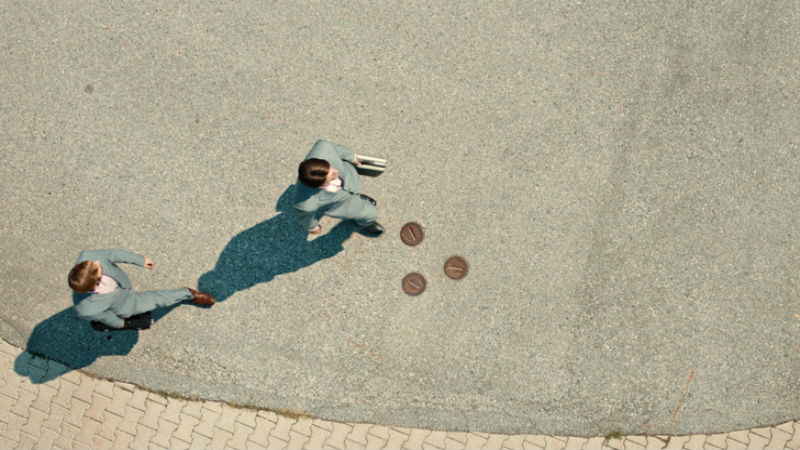 Once we enter the Lynchian part of film, however, other themes surface: like the 70-year-old American filmmaker, the director blurs the line between real and unreal by having their main narrative interspersed with commercials, talking heads interviews and dream sequences, that start to borrow from each other so much that they eventually blend into one being.

For the whole of its running time, the film does not provide much dialogue or even much of a plot, relying on its visuals, that have the look and feel of an art installation, to get its message across. 8:30 is an Austrian production, directed by a Brit, with bits in English, German, Spanish and Italian. In this world of extreme connectivity and a myriad of languages, the helmer proposes that the lack of communication is not due to lack of tools, but a lack of will and focus. In the film, all around the protagonist’s story, content is always been consumed but conversations rarely take place.

Despite its social critique and relatively short duration of just 70 minutes long, the movie does overstays its welcome during its final third. Yet it does manage to create some inspiring surreal moments, specially the one that takes place on a swimming pool (no spoilers there, it’s in the poster). Overall, it seems more suited to museums than to theaters, but that’s hardly a bad quality.

8:30 will show in London as part of the East End Film Festival, which will take place throughout June. It’s a part of the Discovery section.