"Dirty gem"
This warm and tender Irish drama about homophobic bullying in a boarding school is simple and lighthearted on the surface, but the message is no less pertinent and compelling - on Disney + UK on Friday, July 29th; also available on other platforms

Ireland is a fast-changing nation. The profoundly Catholic country was the first one in the world to legalise gay marriage by the means of popular vote, despite fierce opposition from the Church. The society has suddenly come out of the closet, and cinema is keeping the closet doors open so that no one is left inside.

But gay marriage isn’t the only issue that matters to LGBT people. Handsome Devil touches is a very touching and moving gay drama, urgent in its simplicity, delving with two woes that remain pandemic: gay bullying in schools and LGBT representation in sports – the latter is often described as the last and most resilient stronghold of homophobia. The movie succeeds to expose both problems and the destructive consequences for the afflicted with a very gentle and effective approach.

Puny and nerdish Ned (Fionn O’Shea) and handsome sportsman Conor are forced to share a bedroom at their boarding school. Conor is strangely lonely and introspective, despite his looks and the popularity that the sports bestow upon him. He slowly begins to mingle with Ned, with whom the shares a taste for music. Their bond is then tested by the school authorities, with only the teacher Dan Sherry (Andrew Scott) supporting their friendship and musical affinity. Ned, Conor and Sherry are accomplices of each other’s sexuality. 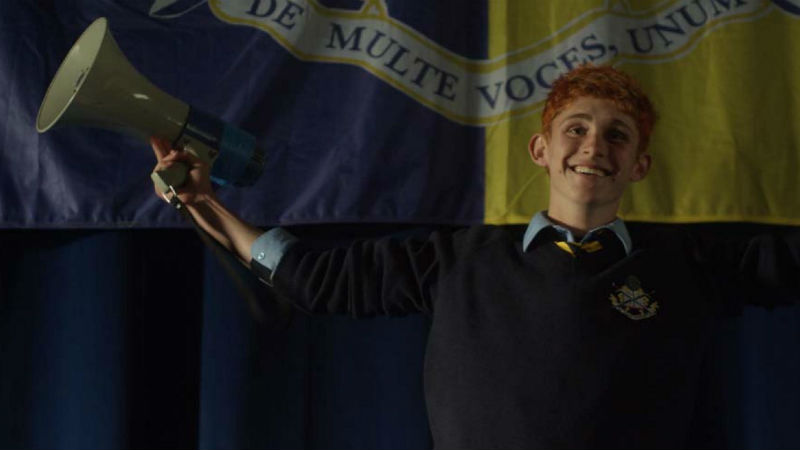 Partly narrated by the unabashed and unrepentant Ned, as if he was recollecting a dark chapter of his life and of his country’s history, Handsome Devil contrasts the grotesque masculinity often associated with rugby against the alleged artistic sensitivity of homosexuals. Of course the equations “straight = sports” and “gay = arts” are not accurate. Instead they have been pushed upon us in attempt balkanise and stigmatise people with diverse sexualities. Thankfully Ireland is now moulting its old layers of homophobia, and these equations are set to fall off with so many other prejudices.

The climax of the film towards the end is very powerful, and it’s guaranteed to bring you tears. It’s a turning point in the film, just like the gay marriage referendum in the country. In fact, this sequence is akin to the referendum in more than one way: it forces the film characters to cast a vote, just like Irish citizens did in 2015. Top it all up with Rufus Wainwright’s heartfelt wailing. This is the perfect gay tearjerker, without ever being corny and vulgar. This is a noble film about strong and noble characters.

Little note: this is not a film about sex, instead it’s a movie focused entirely on sexuality and lifestyle choices attached. There are no picante sequences, which may come as a disappointment to those who would like to have their libido tickled.

Handsome Devil is out in selected cinemas across the UK and Ireland on Friday April 28th (2017). on Disney + UK on Friday, July 29th. Also available on other platforms.