"Greasy movie"
Who is the real machine here: the one with gears or the one with hands? Doc exposes the working conditions of textile factory workers in Gujarat (India), contrasted against the vibrant colours of the garments being manufactured

Next time you walk by Camden Market and purchase a colourful saree handmade in India, please don’t fill your heart with altruistic joy. You are not helping a poor Indian artisan, and you are not supporting the immigrant who sold it to you either. Instead you are perpetuating an unscrupulous industry. Camden is at the bottom of the value chain of a deeply exploitative system. Machines investigates the human cost of mass production in our globalised world.

In a long opening sequence without dialogue, documentarist Raul Jain, who was born in New Delhi and raised in the Himalayas, rescues beautiful images from a textile factory in Gujarat (India’s westernmost state) which closely resembles hell. Men and machines are dirty, grey and black, in contrast to the white garments that they produce. The labourers are stern and silent, and they never sing at work. They work, work and work for just U$3 per shift. A shift is 12 hours long and without break. They don’t wear helmets and gloves despite the hazardous chemicals. Virtually nobody is unionised. They have no holidays and bonus. So you wonder if those men ever get angry and rebel against their bosses. 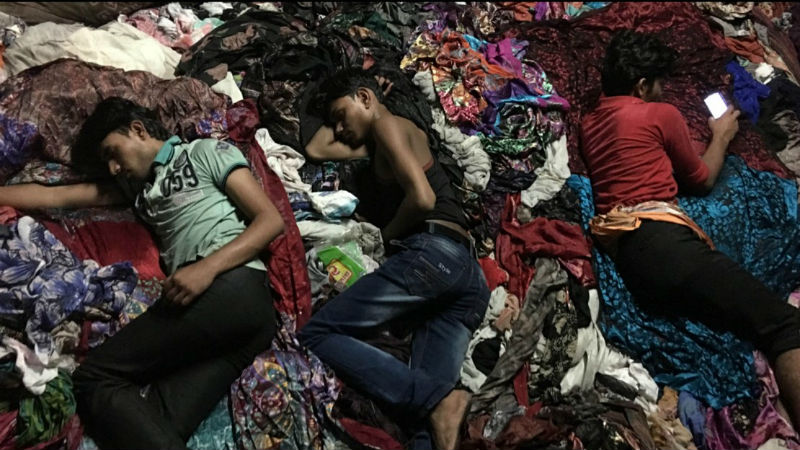 The answer comes in their own voices: “I come here at free will. It’s no exploitation”, says one of them. Indeed, since the 1960s, India has seen unprecedented, unregulated industrialisation. Children and adolescents are amongst the workers. Some of them are so exhausted that they fall asleep while using the machines. “You must learn how to work when you’re young”, declares a scrawny little boy.

The cinematography of the movie is delightful, which was a conscious decision: “There is something that you can’t ignore about beauty. Forcing yourself to find beauty in that which disturbs you can be a good impetus for making films”. Such touching-up makes the film more palatable yet less thought-provoking.

The documentary explores origins and class/caste through the way Rahul engages with the factory workers, many of which are migrants. Some are allowed to share their experiences with the filmmaker, while some ask for help and others just cower in silence. The type of interaction is established by their origin and class/caste.

Machines is an invitation to rethink your concept of work. Next time you plan your annual holiday or contemplate switching jobs, remember the men and machines in Gujarat. Then search your wardrobe and check if there is any shirt made in India. Are you an accomplice of the moneymaking machine?

This piece was originally written when the film was shown as part of Frames of Representation, a festival showcasing the significance of working and its contemporary political and social function across the globe. Machines is out nationwide on May 19th.