"Greasy movie"
Jodorowsky’s second film in his autobiographical cycle takes up where 'The Dance Of Reality' left off, following his life in Chile as a young man as he defies his family to live as a poet - available now on Mubi!

Where Jodorowsky’s 2013 The Dance Of Reality documented his small town childhood, Endless Poetry deals with his subsequent life in Chile’s capital city Santiago. His conservative family wants him to study medicine while he proclaims himself a poet and moves in with the two Cereceda sisters who love art above all things. The older Carmen sculpts while the younger Veronica dances. The latter gives him some money and tells him to go out and find his muse.

He runs into poetess Stella Diaz, played by actress Pamela Flores who also plays his opera-singing, housewife mother Sara. Both women are confident, dominant figures, but where Sara is a devout Catholic, Stella paints selected parts of her body and thinks nothing of, say, exposing her breasts to a male stranger as an excuse for punching him in the face. As they embark on a relationship, Stella proves the dominant force and in time Alejandro leaves her.

Alejandro then meets and befriends the poet Enrique Lihn (Leandro Taub). Their ensuing provocations include walking over a parked lorry and through both an old woman’s house and an underground car park in order to traverse the city in a straight line. 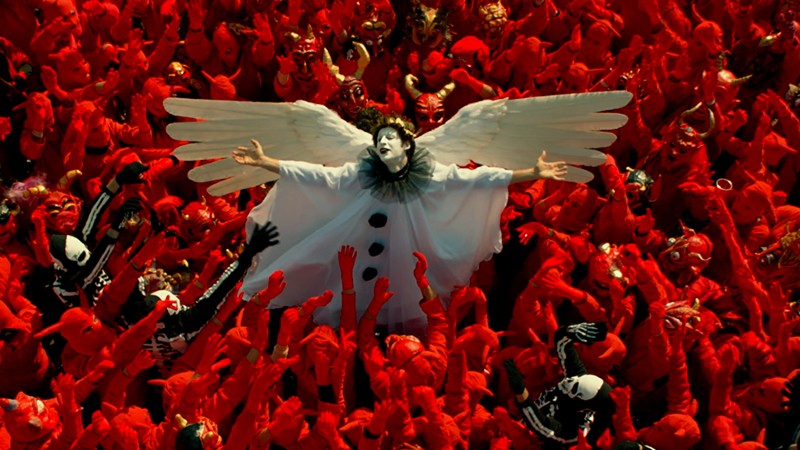 Aiming more at poetic effect than linear, autobiographical narrative, Jodorowsky not only directed but also wrote and designed both productions. At key moments he appears onscreen too as his present day self to offer advice to his younger self (played in Endless Poetry by his son Adan who also contributes a memorable score). His relationship with his father (Jodorowsky’s elder son Brontis) is explored via both an earthquake where father encourages son to be confident however difficult the circumstance and a final parting on a Santiago pier where son is movingly reconciled with father by shaving off the latter’s hair.

Further equally unconventional imagery is thrown at us just as Jodorowsky and Lihn pelt a bourgeois poetry audience with meat and eggs. A man lacking hands instructs male party-goers to use their hands to caress his lover’s body. Jodorowsky has sex with his best friend’s dwarf girlfriend. Maria Lefebre (famed dancer Carolyn Carson) does a tarot reading utilising a naked teenage boy who sports a growing erection. Staged with panache, such unusual scenes deliver a stream of consciousness awash with colourful characters to make for arresting viewing. Yet infuriatingly Jodorowsky’s true self may be hidden behind such autobiographical artifice, compelling though it is.

Endless Poetry was out in cinemas in January 2017, when this piece was originally published. It has now been made available on DVD, Blu-ray and VoD. It’s on Mubi in December 2020.