"Dirty gem"
The never-ending sad story: a child find his comfort zone in a fantasy world populated by a very unusual monster - now on Amazon Prime

Conor is only 13, but he knows perfectly well what will happen just after midnight. He will have the same nightmare over and over again. He’s had it since his mum fell ill. But that night it seems different. Conor hears a voice calling him from the garden. It’s a monster!!!

A Monster Calls revisits the fairy tale genre, with a little help from special effects artists. After all a good fairy tale is nothing but a horror story. A wolf that devours your granny. A poor girl abused by her stepmother and forced to do the house cleaning. Three brothers that insistently witness their houses being destroyed by their worse enemy. Two orphans that are kidnapped by an old ugly cannibal woman. The list goes on…

Spanish director J. A. Bayona plays with the audience’s expectation of reliving childhood. Going back to your past is a ritual. It’s necessary in order to move on. In A Monster Calls, fear is the comfort zone. Based on the award-winning 2011 children’s fantasy novel by Patrick Ness, the film follows the story of Conor O’Malley (Lewis MacDougall) as he retreats into a fantasy world populated with monsters in an attempt to deal with his mother’s illness and school bullying. Dealing with the truth is a real nightmare. 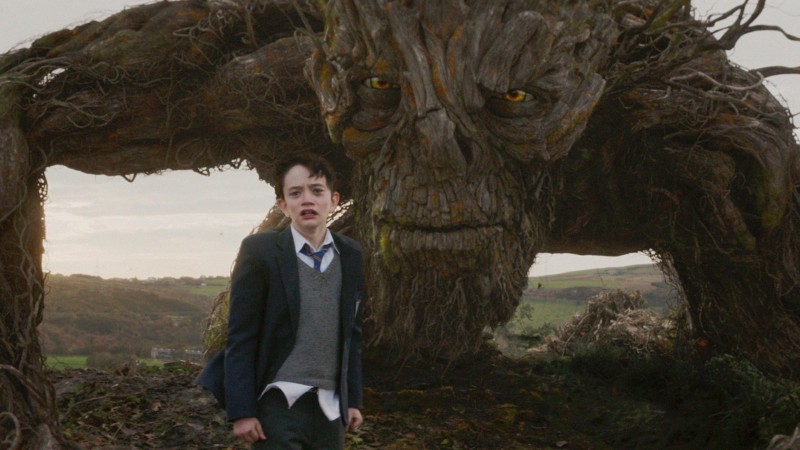 In that sense, the narrative is much more intriguing than a family movie such as Toy Story (John Lasseter, 1995) or any of Pixar Animation Studios feature. The special effects are an allegory of the feelings of loneliness and abandonment. Conor lives with his mother (Felicity Jones), who is constantly doped with medicine. His father has raised another family and there is no space for him in his new house. His grandmother (Sigourney Weaver) lacks interpersonal skills with children. Her house has to remain as immaculate as possible. So Conor imagines a monster (voiced by Liam Neeson), who rescues him from his suffering.

But the rescue isn’t very straightforward, as the monster challenges Conor. Conor is a Brit version of Odysseus. He cannot flee forever. He eventually has to come back home to his harsh reality. He has to take care of himself. His mom has cancer, so he’s become both her caretaker and honorary maid. That means: this kid has to grow up fast. Conor is the opposite of Peter Pan, a deftly subversive device on a classic fairy tale.

J. A. Bayona has won seven Goyas, including Best New Director, with his debut feature, The Orphanage (2008). He is currently working on the sequel of the movie Jurassic World (Colin Trevorrow, 2015). Let’s wait and see whether he finds a way of subverting such a mainstream and formulaic franchise.

A Monster Calls opens is on Amazon Prime on February 1st (2021).