"Dirty gem"
Would you like to see my inner beauty? This German comedy about father and daughter with conflicting personalities and lifestyles is a heartwarming and pleasant surprise from a country not often associated with humour - on Mubi on Sunday, June 28th; also available on other VoD platforms

Last May a big brown hairy monster invaded the red carpet in Cannes – that was a marketing campaign for the German comedy Toni Erdmann, a critic’s favourite at the Festival. Since then the film has sparked audience’s curiosity all over the world. It is not often that a film lifts the mood at such a large event. The same is likely to happen at the BFI London Film Festival this week.

Austrian actor Peter Simonichek plays Winfried, a lonely and pathetic old man who is visited only by his cleaner and the postman. It seems the film will take the same road as Helmut Berger, Actor (Andreas Horvath, 2016), revealing a person with very conflictory relations, except that this time it is a fictionalised character. The name Toni Erdmann is a fabrication of Winfried that comes to life whenever he wants to infiltrate the routine of his only daughter Ines (Sandra Hüller). He wears a funny wig and keeps removing his dentures from his mouth. He is unable to reveal his real identity to her daughter’s friends and colleagues at work. She is a corporate German strategist living in Bucharest.

Although Winfried is perfectly conscious that his daughter avoids him, he decides to pack his things and show up out without warning at her work abroad. His dog has passed away and he has no other plans for the month other than follow his daughter into every single activity she is involved. This includes receptions at five-star hotels, corporate meetings and night clubs. 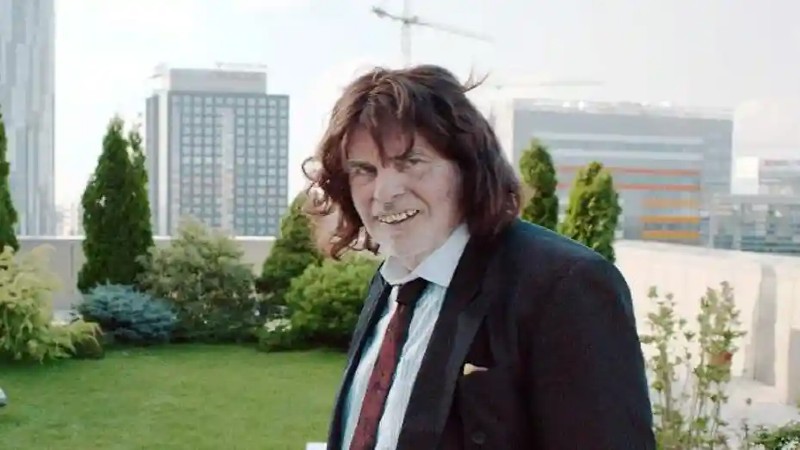 His attempt to reconnect with his daughter culminates in ludicruous and amusing situations. In addition to the comic tone, the film also has at least other two underlying messages. One is the globalisation management and its consequences to countries such as Germany and Romania. Then there is contrast between Ines’s working environment and the surrounding poverty. This is evident when Ines exits the skyscraper where she works and drives to a far location where the Romanian labour force is concentrated.

The film also highlights the contrast between two completely opposite life choices. Winfried hasn’t grown up. At the beginning of the movie kids surrounds him. They are all dressed up like mummies or ghosts and have a heavy black and white make up. There is no distinction between the kids and the main character. He is a man with no ambitions, according to Ines, a go-with-the-flow type. At the other end, stands his daughter. She does everything in order to please her clients, sacrificing her private life to a point that even sex is mechanic.

The film doesn’t propose a middle path, but it is clear that there is something wrong with both lifestyles. Not everything is black and white.

In the marketing clip with the big brown hairy monster, there is a woman who says “he is beautiful”. But beauty, of course, is in the eye of the beholder. just click here in order to watch the clip.

This film played at the BFI London Film Festival in 2016, when this piece was originally written. It also played in cinemas. It i out on Mubi on Sunday, June 18th (2022). Also available on other VoD platforms,