"Dirty gem"
Don't go into the basement! The Japanese hold very dark secrets in their cellar, and it's not mommy's stuffed corpse - Kurosawa's horror is now on Mubi!

Storing food with vaccum packaging may never be same after you’ve watch this 130-minute long Japanese horror flick. After dabbling with other genres (including thrillers and drama, such Tokyo Sonata from 2008), Kiyoshi Kurosawa returns to what he does best and cataculped him to fame in the 1980s: nail-biting horror.

The film is an adaptation of the eponymous mystery novel by Yutaka Maekawa’s. Senior detective Koichi Takakura (Hidetoshi Nishijima) quits his job after failing to use his psychopath theory to stop a hostage situation, which instead ended up in a carnage. He becomes a lecturer and moves to a large house in the suburbs with his young and beautiful wife Yasuko (Yuko Takeuchi).

Yasuko insistently attempts to befriend her eccentric neighbour Nishino (Teruyuki Kagawa, pictured above, and also in Tokyo Sonata), who rapidly swings from a friendly and obsequious mood to a frantic and erratic one. Most of the time, he is secluded at home with his equally creepy and ambiguous teenage daughter Mio (Ryoko Fujino) and a very mysterious never-to-be-seen wife, who apparently suffers from profound depression.

Fears of conviviliaty prevail in the movie. Japanese etiquette when dealing neighbours and strangers is so tense and prescriptive that it may come across as wooden acting to those less familiar with the culture. Kurosawa creates an equally taut setting: bleak and sterile landscapes, claustrophobic houses with narrow entranceways, gardens cluttered with junk and weed, surrounded by tall glass and metal buildings. The lighting is consistently dim. Everything looks soulless and dull, inhabited by human beings uncapable or establishing a relationship with each other. 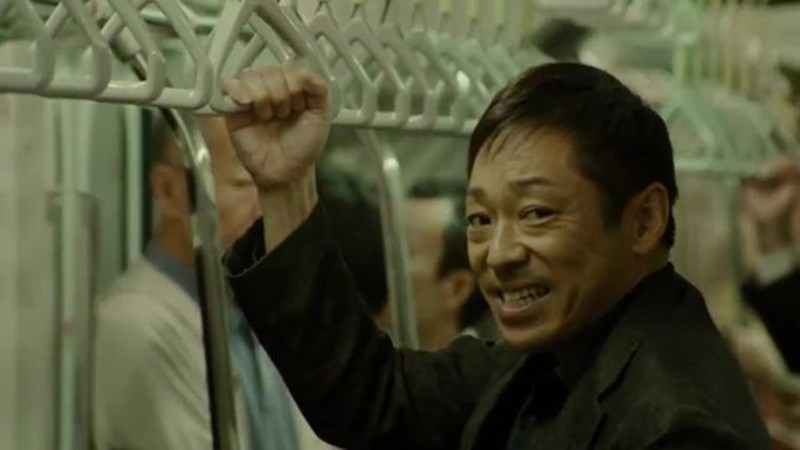 Nishino is a very unusual psychopath. Instead of killing his own victims, he persuades others to do it for him, thereby keeping his hands and perhaps his consciousness clean. He has a long terrifying history to be unveiled, and his family is not quite what it seems. It is unclear, however, how he manipulates people to commit crimes on his behalf: is it pure psychology, is it a drug or does he ultimately have other powers? Paranormality here is replaced by some sort of mysteriously infectious insanity, raising the questions: is psychotic behaviour contagious, and are we all latent serial killers?

The house where Nishino lives is some sort of Bates Motel with some very Japanese perversions: somber, full of corridors and with a cellar teeming with secrets. Most people who go in there end up dead, just like the detective Arbogast in Alfred Hitchcock’s Psycho (1960). In fact, Kurosawa is such a big fan of the British director that he appears in the 2015 documentary Hitchcock/Truffaut (directed by Kent Jones).

Ultimately, Creepy is a film about the ephemerality of trust in the ones you love. How can you kill a parent, a spouse or a friend? Can the evil powers and twisted seduction skills of a stranger supersede such loving relationships? How do you fend off servility when confronted by a very powerful, borderline inhuman force? The answers could be in Nishino’s basement. Cellars and sadistic psychokillers are creepy by default, but what’s really disturbing is how near they could be. Perhaps the psychokiller is even inside you.

Creepy premiered at the BFI London Film Festival 2016, when this piece was originally written. It’s on Mubi in November 2020.

Wife of a Spy (Supai No Tsuma)

The latest creation by Japan's most versatile filmmmaker is a highly conventional and mostly confusing "spy" drama originally conceived for television - live from Venice [Read More...]