"Dirty gem"
The American vulture that kills: families in Paraguay are still mourning and healing from the brutal acts and murders carried out as part of the infamous Operation Condor - taut yet tender movie is streaming now with DMovies

The Paraguayan politician Agustín Goiburú disappeared without a trace while living in exile in the Argentinian province of Entre Ríos. He was the most prominent and vocal opponent of Alfredo Stroessner, the military dictator that ruled Paraguay from 1954 to 1989. The documentarist Paz Encina found a very inventive way to recreate the Paraguayan political context through the memories of three children. These young desaparecidos (missing) reveal intimate memories of a country for the past 35 years without ever appearing on-screen.

The rhythm of the film is very slow. The camera brings to sight an old house in the countryside, its objects and its surroundings. Most of the time, the film portrays children from the Guarani tribe, playing in the river or riding horses. Encina relates Goiburú’s opposition and death to the killings of native indigenous people. The strength is that the feature is profoundly critical of a very violent political regime without ever displaying graphic violence.

One of Agustín Goiburú’s son, Rolando, was just a kid when he and his father were kidnapped by the guards of the president. His memories are of a stolen childhood. He was fishing with his father when the men arrived and asked for their documents. Still on the boat, the guards obliged them and another man to row until they reached a Marine post. The guards carried weapons that were used 30 years before during Chaco War, a conflict between Bolivia and Paraguay over a territory. 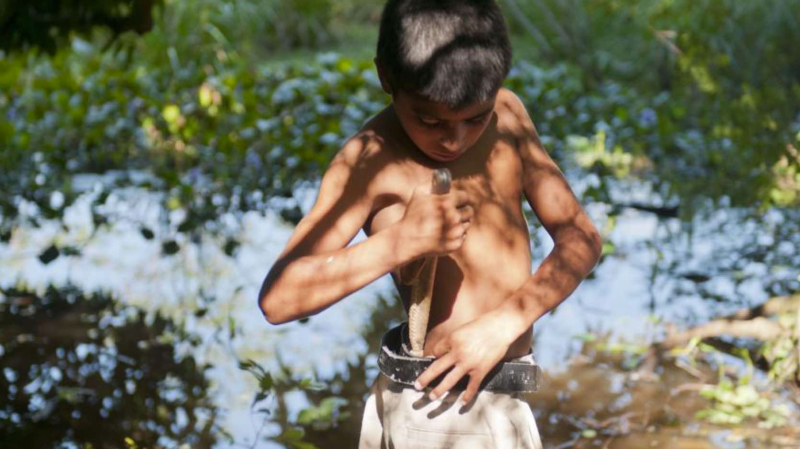 The other son and daughter explain how they learnt to use weapons and always to be suspicious of strangers. Goiburú was a doctor who publicly denounced the torture and violence carried out by Stroessner’s regime. He was also a founder member of Mopoco (Movimiento Popular Colorado) in 1958, a resistance movement that infuriated the dictator.

Stroessner unsuccessfully tried to capture Goiburú for many years. In 1976, Argentine suffered a coup d’etat, and as a consequence Stroessner had the enthusiastic support of the neighbouring country’s new leader. The United States provided technical support and supplied military aid to members of governments in Argentina, Chile, Uruguay, Paraguay, Bolivia and Brazil, in the intelligence operation known as Operation Condor. The dissident doctor was quickly located and murdered.

The most aggressive way to portray history is by comparing the young Guarani kids living in freedom with the the official photos and documents taken by the intelligence service. Goiburú’s family never found the body and were never able to bury him. There is no closure, and so they are still mourning. There is an illusion, an incomplete memory, that consists of a terrifying aspect of life.

Memory Exercises is Encina’s second feature film. It was presented in San Sebastian International Film Festival in 2016, when this piece was originally written. It’s showing in September 2017 at the Open City Docs Film Festival in London.

You can watch it right here with DMovies and Eyelet: