"Dirty gem"
The irresistible naughtiness of being: the director of the dirty masterpiece Tangerine takes a look at the innocence of childhood, in a film set just outside Disney World - now on all major VoD platforms

One of the good aspects of Sean Baker’s work is that he considers his audience clever people. By clever, I don’t mean he wants us to solve a mystery. His films are not thrillers. You don’t need to pay attention to every detail in order to find out who’s the murderer. I am talking about another kind of intelligence and sensitivity.

The Florida Project is “a loving look at the innocence of childhood”, as announced in the film trailer. Everything the camera captures is from the point of view of three children, Moone (Brooklynn Prince, perhaps the new Drew Barrymore, who was also first cast for a movie at the age of 6); Jancey (Valeria Cotto) and Scotty (Christopher Rivera). That means that when those children are on screen, the camera mostly remains at their height. We mostly see a world through their eyes and lenses. We cannot see what solely to the “adult world”. When Brooklynn’s mother has sex in her room, we don’t see the man’s face. 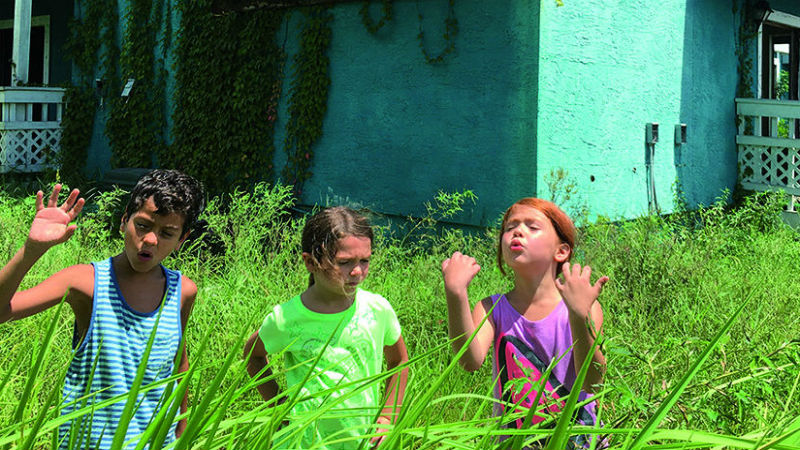 The story takes place in a motel in Florida, just outside Disney World, during the school break during American Independence Day. So the film is a series of children’s holiday adventures. They spend their time playing pranks, which can annoy the audience too. Kids are noisy and naughty. They beg for free ice-cream, they do spitting competitions from the second floor of the motel, they set fire on an abandoned building, they cut off the power of the entire motel. Independence Day is particularly “magical” in Orlando. The Magic Kingdom and Epcot Center each have dedicated fireworks on July 4th. Disney spends from $41,000-$55,000 a night on fireworks. The whole set of adventures the kids take part in culminates in the last scene. The children finally celebrate their own independence.

The film has an astonishing photography. Likewise Tangerine (2015), colours are saturated. Instead of predominantly orange of the previous film, The Florida Project is mainly purple and green, just like the walls on Miami International Airport. With The Florida Project, Sean Baker consolidates his style, also evident in his short movie Snowbird, 2016 (which can be watched here) – these films do not have a plot. The narrative heavily relies on the work of non-actors, on their spontaneity and commitment to reality. Baker represents the lives of marginalised Americans. The director uses photography in order to tell a story. Mooney and Jacey want to get to the pot of gold at end of the rainbow. The colourful rainbow is a symbol of the journey the kids are about to start. They desire to get out of the margins of society. The photography is not only beautiful, but it is a meaningful part of the story. 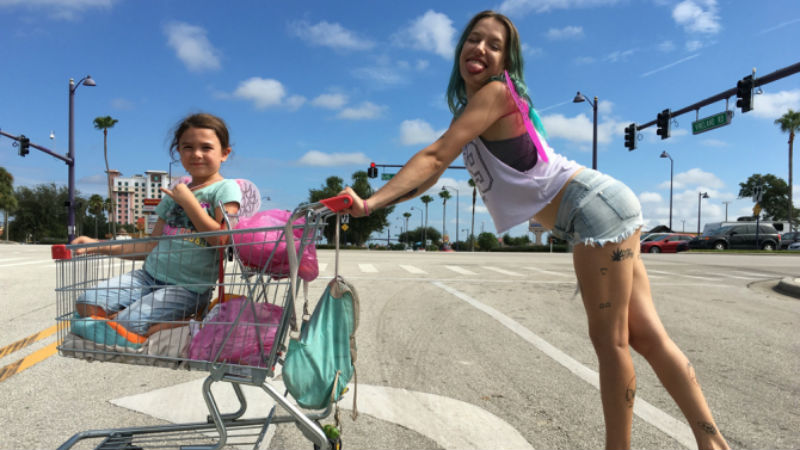 Baker’s strongest characters are not men. In Tangerine, the main characters are two transsexuals. Here, they are children and single mothers, who bend over backwards in order to survive. Many cinema lovers are tired of the mass representation of men. We don’t want to see aggressive males prancing around. At the same time, we can’t banish men from movies. Baker nailed it. Here comes Willem Dafoe as you have never seen before. Dafoe does not play a tortured man as in Platoon (Oliver Stone, 1986); or a stereotypical villain as in Spider-Man (Sam Raimi, 2002). Here he is simply Bobby, the motel manager, and most importantly, an adorable father figure to all those children whose fathers left them behind.

On the other hand, The Florida Project lacks twists and surprises. By consolidating his style, Baker surrendered the deeply subversive streak of Tangerine. Here he plays safe and he doesn’t innovate.

The Florida Project showed at the 61st BFI London Film festival in October. It’s out in cinemas on Friday, November 10th. It’s out on all major VoD platforms in April 2018