"Dirty gem"
US meddling is an ugly monster waiting to be caged, argues Tiago di Mauro about Guillermo del Toro's latest flick - out in cinemas on February 14th

Guillermo del Toro’s latest movie comes tightly packed in a liquid wrapping, and it’s difficult to decide where to start opening it. Fluid and delicate, it’s a tale of a modern time when minorities get together in order to restore dignity in their wrecked lives through mutual love. It all starts out as your standard blockbuster, but suddenly the dirty elements step into the picture: there’s plenty of nudity, female masturbation, bestial sex, plus a very wet and messy orgasm. Nothing is toned down or hidden, like you would expect from your average Hollywood flick. It’s like watching a Disney film in which Lilo shags Stitch. You will eventually get hooked and excited about The Shape of Water. Or maybe even aroused.

The mute protagonist Elisa is played by superb Sally Hawkins, and she might get an Oscar nomination for this role [our writer’s prediction has since materialised]. During the Cold War era Elisa is trapped in a life of silence and isolation with many other people. One day she discovers a classified secret experiment in the high-security laboratory where she works: an aquatic monster from the Amazon, fully alive. In a way, this is a subtle denunciation of Operation Condor and US meddling in Latin America during the Cold War. 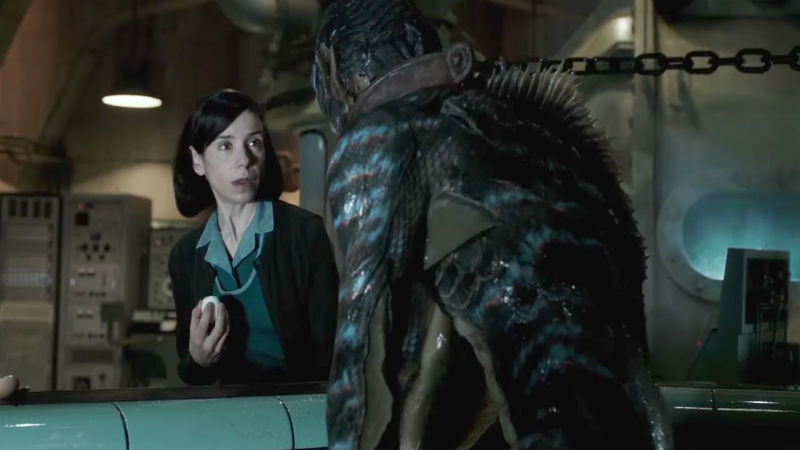 Great timing for such release*. Brazil recently opened a large chunk of its territory to American mining companies, only for a court to annul the decree (incidentally, today). In the film, oppressed minorities join forces in order to fight the foreign invaders, the white American enemy. Amongst them is a black cleaner (Octavia Spencer), an old gay painter (Richard Jenkins), a kind-hearted Russian spy (Michael Stuhlbarg), and many more.

As you’d expect from del Toro, the film comes with an astonishing photography and sparkling with visual effects. But The Shape of Water‘s biggest achievement is to blend Hollywood taboos such as sex and nudity with the fiery topic of American interventionism. The struggle of the minorities is an allegory for the struggle against Imperialism. All doused in del Toro’s dark yet plush filmmaking style. Ultimately, the powerful elites are the real monsters that should be kept silent and caged.

The Shape of Water is out in cinemas across the UK on Wednesday, February 14th.

This review was originally written during the 74th Venice International Film Festival, where the film premiered and also won the Golden Lion, the event’s top prize. The film has since been nominated for 13 Oscars, including Best Picture.