"Filthy genius movie"
Fifty years on, The Graduate remains as young and refreshing as ever with its simple yet extremely effective message of embracing and pursuing love at all costs... and at all ages - in cinemas this weekend!

THIS IS NOT THE ONLY FILM OUT NOW IN CINEMAS DEALING WITH THE RELATIONSHIP BETWEEN AL OLDER WOMAN AND A YOUNGER MAN – CLICK HERE FOR OUR REVIEW OF SOUVENIR (BAVO DEFURNE), STARRING ISABELLE HUPPERT

Loneliness, isolation and crisis of one’s own place in society are not normally synonymous with life after graduating university (or ‘college’, in the US). Such meditative themes are central to Mike Nichol’s 1967’s ground-breaking piece of New Hollywood film, The Graduate. Celebrating its 50th birthday this year, the film is being re-released in a crispy 4k restoration by Studiocanal in the UK. However, as a newly titled ‘Graduate’ myself, the themes in the film are not hyperbolic or especially fictional, yet nuanced and appropriate to finishing higher education. The insulation which university and education has provided over your formative years is suddenly striped away and the ominous working world comes to bare its imprint upon your daily life and thought process.

Returning home to Beverly Hills, California, Benjamin Braddock (Dustin Hoffmann) is greeted by sunny skies and an abundance of wealth, but underneath he is cold and none the wiser to his future. Bathing by the pool, boredom creeps in. Forced to socialise with his parent’s friends, conversation is tedious. That is until the seductive Mrs. Robinson (the late Anne Bancroft), a family friend, charms him into a sexual relationship that distracts him from his former solitude. All comes undone when Mrs. Robinson’s daughter, Elaine (Katharine Ross) steps into the fold. Explaining on plot on a literal level does an injustice to the film’s innovative use of cinematography, soundtrack and dichotomous presentation of love. Elaine and Mrs. Robinson are two sides of the same coin: one is sexual fulfilment, the other one is spiritual through true love. 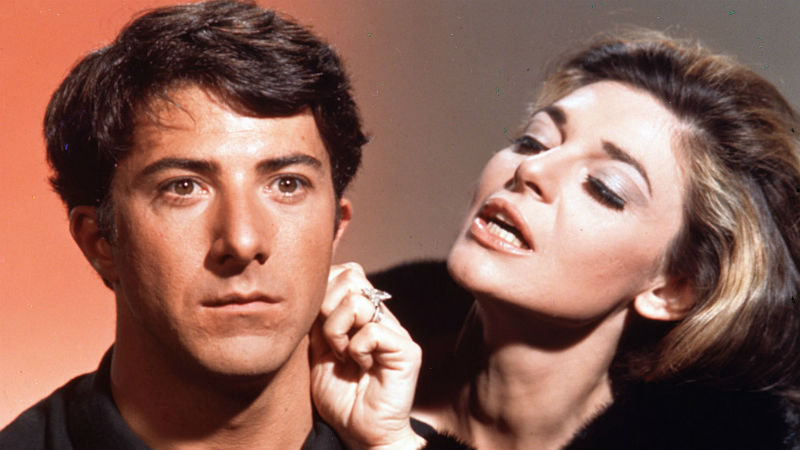 Behind Mrs. Robinson’s flirtatious act, however, she is just as lonely as Benjamin – two lonesome souls drifting together. The balance of a shy reserved character in Hoffmann’s performance is juxtaposed against the mesmeric quality to which Bancroft delivers her lines. This binary serves to initially create comedic moments, such as the iconic ‘Mrs Robinson, you’re trying to seduce me, aren’t you?”, though its creation would not be possible without either actor. The difference in age between the two in front of the camera underscores both actor’s elegance as Hoffmann was Bancroft’s junior by just six years (she was 35, while he was 29). Originally casting Robert Redford and Jeanne Moreau in the roles, the whole piece would have read differently if such a creative decision was followed through by Nichols & Co.

The enduring legacy of The Graduate is testament to its director, Mike Nichols. Gaining an Academy Award for his skills, the variations of shots in the film serve to reflect Benjamin’s isolation from society. Varying from a POV diving sequence which uses the diegetic sounds of Benjamin’s breathing against the excessive laughs of his parents and latter driving sequences across the Golden Gate Bridge deserve to be witnessed and heard on the big screen. 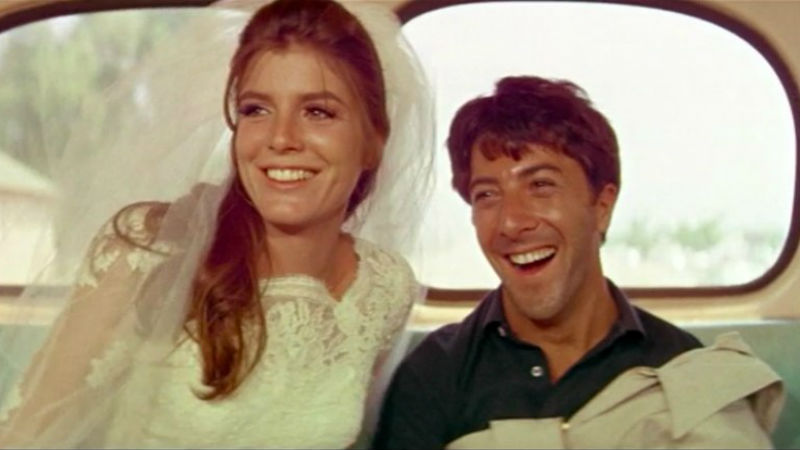 The influence of the New Hollywood, as pioneered by Nichol’s film, Bonnie and Clyde (1967) and Easy Rider (1969), does not only implement itself in the use of performance or cinematography, but soundtrack. Created by folk rock duo Simon & Garfunkel especially for the film, The Graduate’s use of music set in place a template which has been adopted ever since from the likes of Tarantino to Edgar Wright. Still, focusing upon the composition of such songs, S&G’s sounds are reflective of Benjamin’s emotions, none more so than the song The Sound of Silence. Merging the music of this duo and a character’s feelings positions the audience right alongside Benjamin.

Strangely comic in places yet with an emotional core, The Graduate rightly so deserves such a stunning re-release in cinema’s nationwide this summer. With its messages of isolation so vivid in an age of rising tuition fees, expectations upon younger people and similarly a 70% rise in rates of depression and anxiety among adolescents in the past 25 years, Nichol’s et al offer a liberating message of embracing love and pursuing it at all costs. Tainted with an admirably bold final shot on the back of a bus, it’s a film that’s not afraid to illicit questions in the mind of its audience upon the very nature of a messy mature world.

The Graduate is out in cinemas across the world on Friday, June 23rd in order to celebrate its 50th anniversary.