This starts off with images of graffitied walls in a family home and only when an animated puppet hand picks up some coloured pencils does it become apparent that the proceedings are animated. Courgette lives at home with his mum who sits in front of the TV and shouts at it. The house is littered with her empty cans of beer, which Courgette builds into a tower in his room at the top of the house. His mother is killed in an accident involving a trap door. So he’s taken into care and driven to a home by kindly policeman Raymond.

At the orphanage, Courgette finds himself alongside a small number of troubled prepubescent children including the attention-seeking Simon and the quiet Camille. The kids are starved of parental affection but Monsieur Paul and other orphanage staff do what they can to compensate. Simon starts out bullying Courgette, but when Courgette falls for Camille, Simon helps him break into the office to see Camille’s records. These reveal she is traumatised from witnessing her adulterous dad kill her mum and there’s a possibility her abusive aunt may try to take custody of Camille to get the state benefit.

Unlike so many mainstream children’s films which are designed to capture young minds by throwing relentless, rapid fire sounds and images at them, this one concentrates on the plight of its characters and how they deal with deep-seated social issues confronting them. A wry observational humour underscores the whole thing, as when Simon explains to the others that the final point of “doing it” is that “the man’s willy explodes”. 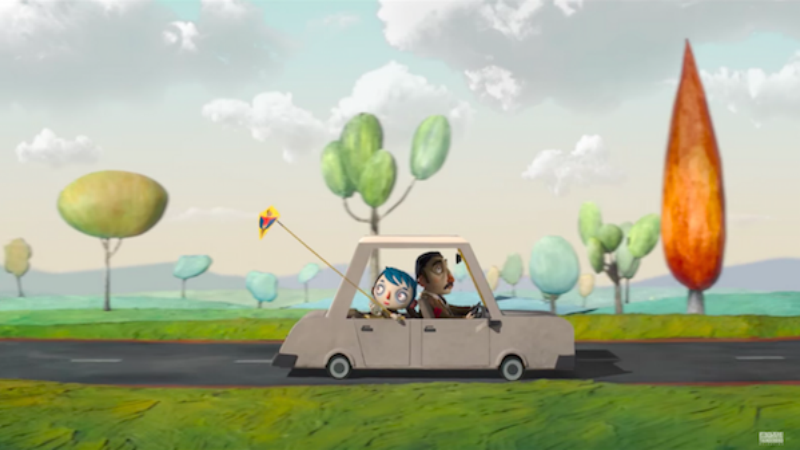 Rather than try to be hyperrealistic, the puppetry adopts a very specific style with big wide eyes for the kids who, despite their plight, are smitten with wonder for the world around them and just want to fit in like everybody else. Yet, one girl expresses her unease with a nervous tic that makes her repeatedly bang a fork on her plate at table while another boy vents his hatred of police by emptying a bucket of water on Raymond’s head whenever the latter visits. An essentially good man separated from his partner, Raymond plans to adopt Courgette and give him a decent home.

These puppets so completely engage the audience that you enter into their world. There’s a very French feeling about the whole thing – the simple architecture of the orphanage reminded this writer of the school in Diabolique (Henri-Georges Clouzot, 1955) – which means the French subtitled version works slightly better than the English dubbed one (both are being released here, so check which one the cinema you propose to visit is showing). The French version also gains from making the voice of the mother considerably more savage, although it must be said that the excellent US English dub is better than most.

In short, this is a striking script adaptation of a book realised with a real love for the craft of the stop frame animation process. Yet it’s much more than that, too: tackling difficult social issues head on whilst delivering convincing child (and adult) characters with lots of rough edges in a simple story which holds the viewer’s attention throughout. One of the year’s best films, despite its brief 66-minute runtime, and absolutely suitable for children… although if you’re an adult, you don’t need to take kids as an excuse to see it.

My Life As A Courgette was out in UK cinemas in June, when this piece was originally writen. It’s out on DVD and Blu-ray on Monday, September 18th. On Mubi on February 5th (2022).

Click here for another equally arresting animation out in cinemas right now.