"Filthy genius movie"
Japan’s Studio Ghibli backs a European-made animated tale without dialogue about a man marooned on a desert island and... a red reptile - now on DVD and Blu-ray

From the get-go, this is not your usual 2D animated film. The Red Turtle is slow-paced, has no dialogue and is certainly not aimed at children. Yet there’s nothing here you wouldn’t want kids to see, as its PG certificate testifies. Whether young minds would be spellbound or bored I wouldn’t like to say. Nor is it Studio Ghibli’s usual home-grown, Japanese fare being a French-Belgian production by a Dutch director based in London. Nor does it start off where you might expect: a man adrift in a powerful, stormy grey sea separated by some distance from his overturned, small boat. There is no indication of how he got there, there are no flashbacks later on to show us what happened before that. Rather, the character reaches dry land and must survive there alone feeding on crabs and seagulls.

Understandably, the man builds a raft out of bamboo to escape, but out at sea his attempts are thwarted and he ends up back on the island. Somehow a woman appears on the island. They have a son and the son grows to be a man and leaves the island. The couple grow old. If the woman’s appearance sounds somewhat unbelievable, it makes sense within the narrative. Without wishing to reveal any story spoilers, let’s just say that, one, a red turtle and indeed a whole bale of turtles are involved and, two, the myth of the selkie (a sea creature that can turn into a woman) is invoked.

The story functions as an effective fable about adulthood and life. Michaël Dudok De Wit and his team brilliantly develop the character of the man through the various challenges he must face. For example, one early scene has him slip down a rock face to become unexpectedly trapped in a deep pool of water enclosed by sheer rock on all sides; he must find a way out or perish. When his small son later experiences the same predicament, the viewer wondering how this might play out recalls the father’s earlier experience as well as the mysterious, magical nature of the mother. 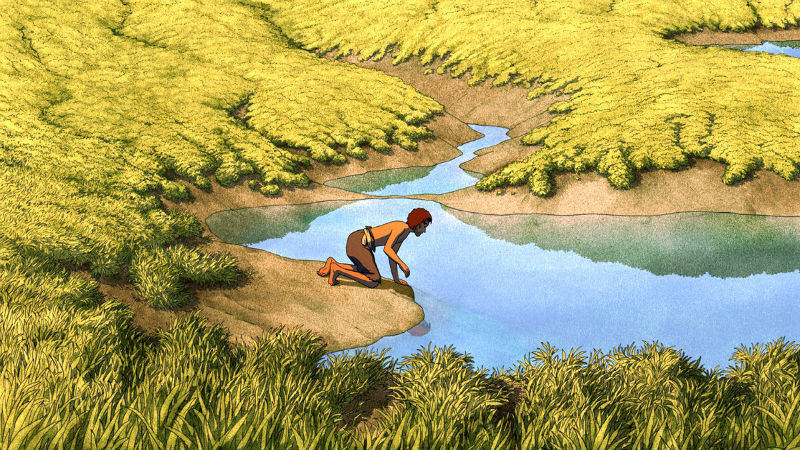 The film understands which details it needs to emphasise and when to emphasise them. The initial arrival on the island has the wind blowing through the rippling bamboo forest bordering the beach while the clouds move slowly, almost imperceptibly across the sky to enforce the sense of stranded isolation. These minutiae are abandoned later on by which time we have completely accepted the world of the island as real. Towards the end the island is hit by a terrifying tsunami which decimates the forest, as devastating a sequence as the storm which opens the picture.

Scuttling crabs provide lighe relief while an extraordinary dream sequence has the protagonist fly along the length of a mysterious jetty on the island. Yet the overall tale has a grit to it which plays against the overall mythical feel, grounding its characters in another world that looks and feels utterly tangible. The human experience of arriving in adulthood alone, reaching out and propagating the species runs very deep. That experience is essentially what this extraordinary film is all about.

The film is a co-production between the Japan’s Studio Ghibli and France’s Wild Bunch. Click here for another deliciously dirty animation, this time a fully Japanese one.

The Red Turtle was out in the UK in May, when this piece was originally written. It was made available on DVD and Blu-ray on September 25th.